We haven’t featured John Milner here in a Card of the Day so it’s time to rectify that oversight. Milner, who played for the Pittsburgh Pirates from 1978 until 1982, was born on this date in 1949. Sadly, it has been almost 21 years since he passed away days after his 50th birthday. Here’s a look at the man who was a solid contributor to the 1979 World Series champs. Today’s Card of the Day is a 1981 Topps John Milner. 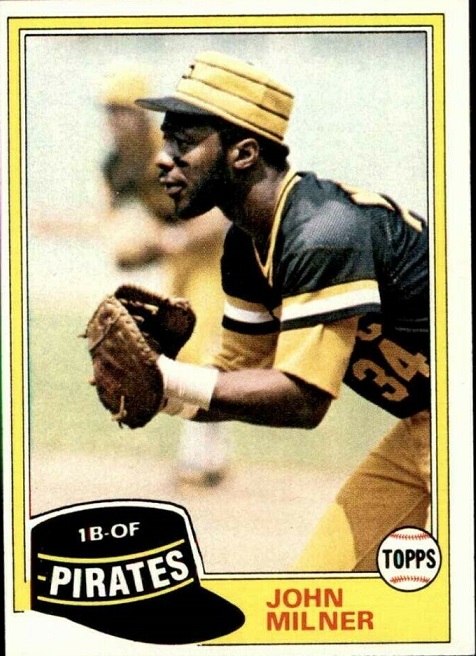 I did a search of Milner’s cards on the Pirates to see which one caught my eye. I went into thinking that I was going to use his 1980 Topps card. I’m a huge fan of the 1981 Topps set, especially how they used the yellow borders for all of the Pirates cards. As noted in a previous article, all of the teams have hats in the bottom left corner, but only the Pirates have something different. Their positions/team name caps are the pillbox style. The other 25 teams had the same hat design. The combo of yellow and black, along with the gold/black color combos worn by all of the players, makes this a favorite of mine. Topps has used this front design/color combo in some recent sets that have throwback designs and I’ve bought those individual cards. The only problem is that they didn’t use the correct hat when replicating this set.

This particular pose was the best in my opinion, though it was a close contest because the 1981 Donruss card has a pose that is almost identical, except they didn’t crop it close. It’s a full body shot of Milner in the ready pose at first base. I think the front design sold me on this particular one. I also like the mystery player to his right at second base. I figured it was most likely Phil Garner, who played almost every game for the Pirates at second base during the 1980 season (I’m assuming the photo is from 1980, but it may not be). Three other players saw brief time there, though you can eliminate Matt Alexander, as well as Dale Berra, who never played alongside Milner. The only other one is Vance Law, who played one game at second base with Milner and a quick check of the interwebs shows that the Pirates wore home whites that day. That leaves Garner, assuming it was a 1980 photo of course. If it was taken the previous year, Garner is still the only suspect because he split the time there with Rennie Stennett and Lee Lacy in 1979. You would have to go back to 1978 before you found other possibilities. 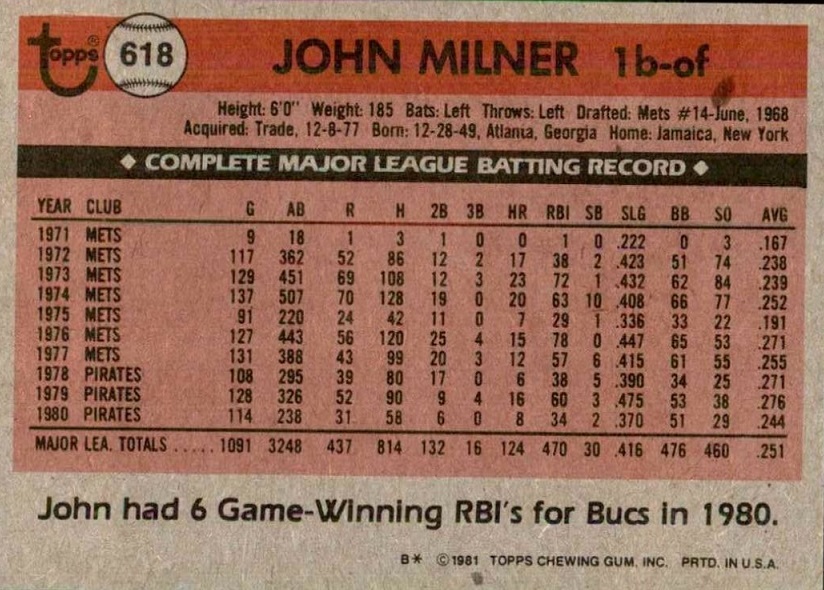 I’m a big fan of the color choices on the back here, which make it easy to read the stats. Milner already had ten years in at the majors at this point. He played just two more years and his playing time in 1981-82 was limited, so these stats represent a good portion of his career. Milner was a 14th round draft pick out of high school, who made it to the majors at 21 years old and he was a regular in the lineup by age 22. His career faded out at an early age, playing his final game at 32 years old.

As you can see at the bottom, Milner had some big hits for the 1980 Pirates, even though he didn’t drive in a lot of runs that season. The 1981 Topps set had some extra categories added over the 1980 Topps backs. The first eight categories (games through RBI) were on the 1980 cards as well. They were follow by batting average, and that’s it. The 1981 Topps set added stolen bases, slugging percentage, walks and strikeouts to every card.

If you’re interested in this card, you’ll be happy to find out that it’s considered a common and most of the price involved in purchasing it comes from the shipping. You can find it easily on Ebay and it will run you $2 delivered at the most. A PSA 10 (perfect condition) sold for $22 back in October, so even the nicest ones won’t break the bank. There are four autographed examples up for auction at the time of this writing. One of them is graded/authenticated and it has a $35 price tag. The others ungraded and they cost between $15 and $20.