With today being the 70th birthday of Mario Mendoza, which you probably read about earlier in our This Date in Pittsburgh Pirates History article, I figured I would feature him here for the first time in a Card of the Day article. No one in baseball has taken more grief for being a nine-year Major League player than Mendoza, who will forever be associated with futility at the plate. Today’s his birthday though, so let’s celebrate the man who was a better baseball player than 99.6% of the people who will read this article. I present to you, card #383 in the 1978 Topps set, Pittsburgh Pirates shortstop Mario Mendoza. 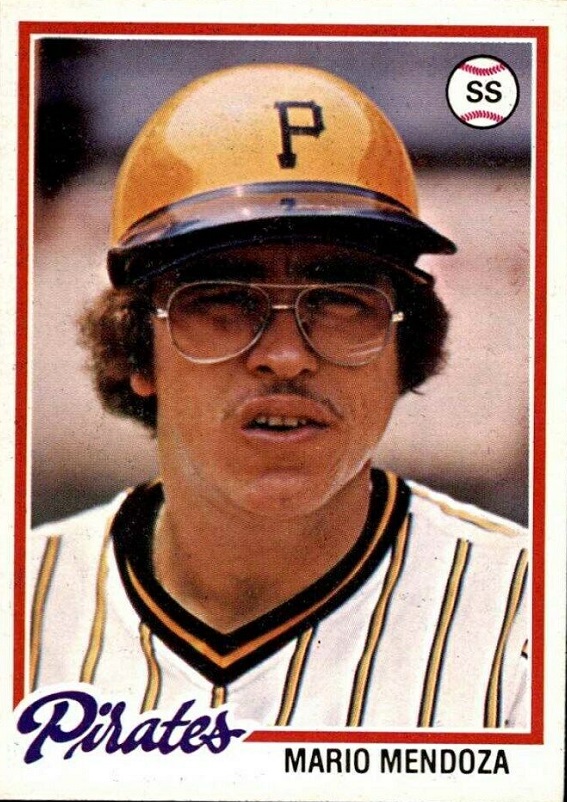 The 1978 photo of Mendoza wasn’t exactly the best that Topps had available at the time. He doesn’t exactly look like he knew that his photo was being taken. I personally love the mix-and-match jerseys of this era EXCEPT for the white jersey with gold pinstripes. That was especially true when they wore the full pinstripe uniform. I’m okay with the pinstripe jersey and black pants combo. Maybe if I was around during this time, I would have a greater appreciation for it, but seeing it for the first time years later, it did not appeal to me and I’ve still never embraced it. Many years after this card came out, I had that same batting helmet as a young kid and wore it a lot. I have no idea what happened to it, but now I feel like getting one again. 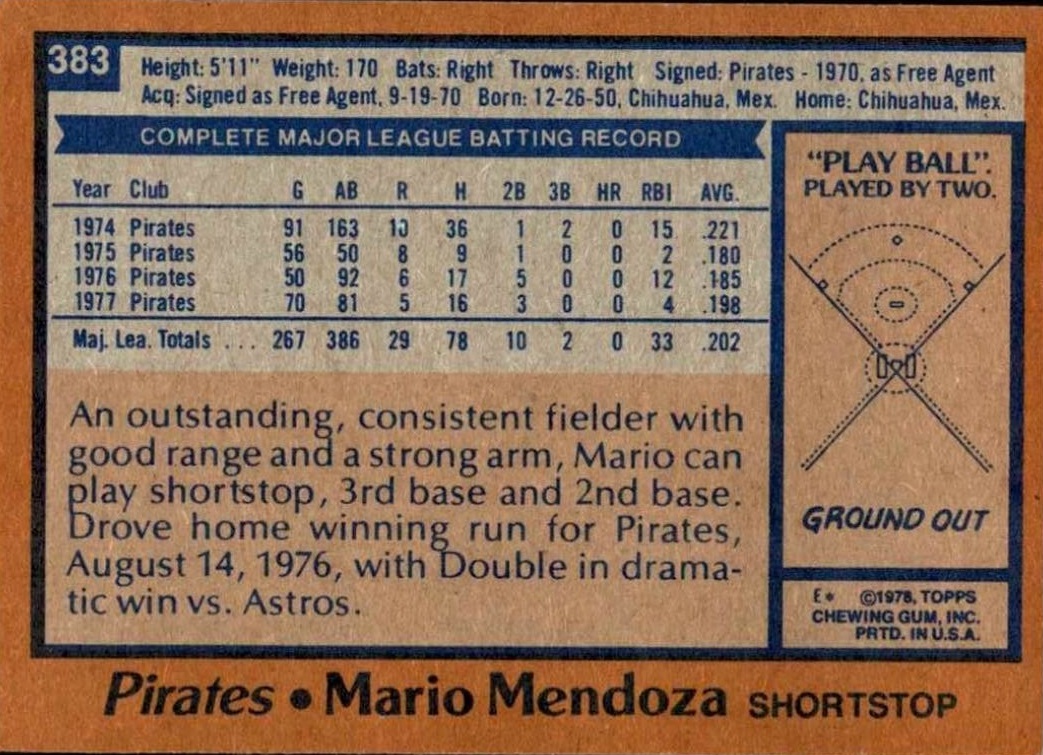 The back of the card notes how well Mendoza played in the field at multiple positions, which is how he stayed in the game so long. There’s also a note about him hitting a double (for some reason it’s capitalized?) to drive home a winning run in 1976. I guess nothing noteworthy happened on offense in 1977 when he hit .198 and drove in four runs all season. Notice that his career average at this time was two points above the Mendoza line. Also, he had yet to hit his first career home run. He didn’t wait long to get it though after this card came out. On April 29, 1978, he hit a homer off of San Francisco Giants pitcher Jim Barr, which cleared the left field fence at Three Rivers Stadium.

I’ve noted in previous articles about the 1978 set that they had a game that collectors could play on the right side of the back. Each card had some sort of outcome, or rules on how to play the game. The outcome was always the same for a player, meaning that every Mendoza card had a “ground out”. The idea by Topps was that you had to have enough cards that you could play an entire game with 27 outs on each side, along with the positive outcomes, so you would need about 100 cards with outcomes before you could play a game with another person. The game was heavily weighted towards offense, increasing the amount of cards needed to play a whole game.

If you wanted to get this card, you’ll be happy to know that there isn’t a huge demand for it. It’s a common that will cost you about $2 delivered in nice shape. In fact, PSA 9 versions, which are almost perfect condition cards, have recently sold for $11 and $12 delivered. Signed copies of the card can also be had fairly cheap, with one selling for $7 two weeks ago. There aren’t many of those available, but if you wait for an auction instead of a Buy it Now, you’ll get a good deal.