Since Sam Leever is considered an all-time great for the Pittsburgh Pirates and he was born 149 years ago today, I decided to do an extra article celebrating him. You can read his bio from this morning in our This Date in Pittsburgh Pirates History article. We also posted a Game Rewind from one of his best career games, as he took down a 300-game winner with his pitching and hitting. Today we also look at his card from the 1910 E91 set, one of the strangest sets of the early 20th century. (EDITOR’S NOTE: This was scheduled to publish yesterday, but it didn’t post and we noticed it too late to post last night) 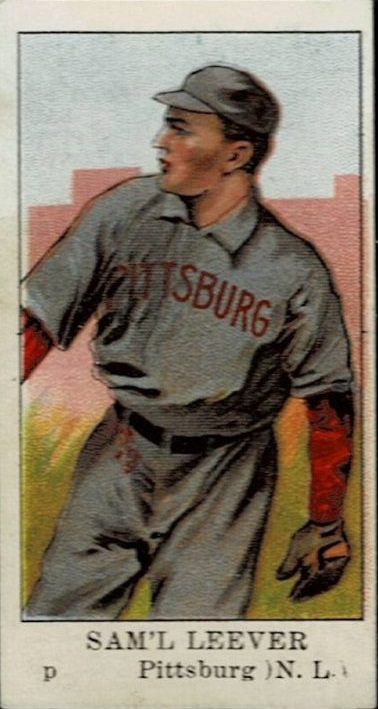 I mentioned how strange this set is and that’s because of the artwork and the discussions it brings up with early baseball card collectors. The E91 set is often referred to as having generic pictures of the players. If you look at a bunch of the players side-by-side, you’ll think that the same player has about 50 cards in the set and they used the same poses over and over. However, many of the drawings are based off of actual photos of the players, so it’s only somewhat of a generic looking player.

The problem seems to be that they just didn’t hire a good artist when it came to facial drawings with the players. If you look at that card, there’s nothing wrong with the uniform, though “Pittsburg” which is spelled correctly for that time period, was never part of the jerseys back then. That was just added to many cards for identification of the team. Since they used some poses more than once, they just changed the city name on the uniform and nothing else, keeping the same colors. This artwork here is loosely based off of a real photo of Leever, the artist just didn’t do a great job capturing the uniqueness of each player’s face.

The T206 set is iconic in the baseball card collecting world. They also did drawings based off of real photos, but their artists really captured the players. Other sets from that same era also did a great job of making the players look more life-like in drawings. However, the E91 set was an awful representation of them. In one way, many people ignore the set because they considered it all to be generic. On the other hand, other collectors flock to it because it allows them to get period cards of all-time greats for a bargain price compared to other options from that time.

I personally have just two examples from the set, both Pittsburgh Pirates cards, and I probably don’t have to tell you that one of them is Dots Miller. The other one is a Jap Barbeau with the wrong back, which was also printed upside down, making it a highly collectible error now, but it was just a cool looking card when I paid a small price for it years ago. 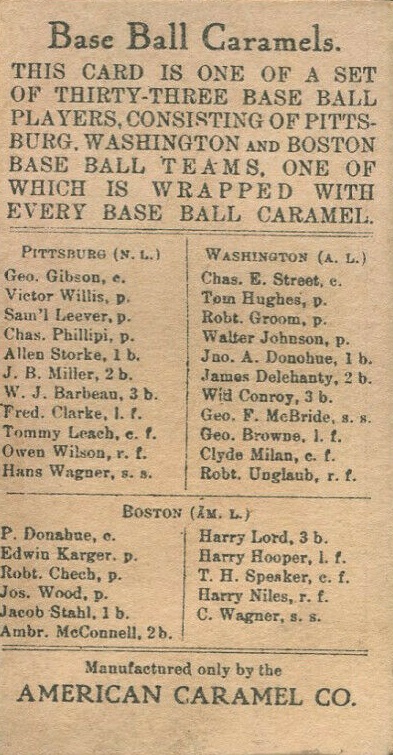 The back serves as both a checklist and an advertisement for caramel candy, which was extremely popular during this era. Including cards of baseball players also helped sales. As you may have guessed, this back can be found with players on front from the three teams listed, the Pirates, the Boston Red Sox and the Washington Senators. Players from other teams came with different backs and are considered to be subsets of one big set. The Pirates are considered to be in the “C” subset, so you might see this card listed as E91-C. You might notice that Honus Wagner is listed there, which is because he had no trouble letting his name be used for caramel sales. Players received a small compensation for permission to use their name and likeness…though the likeness part is a bit stretched here.

You either have zero interest in this card or you just want one as a type card now because it’s a bit different. So that brings up the price cost. Low grade commons from the set will sell for just $20-$25, which isn’t bad considering that they are 110 years old. There are no recent sales for an E91 Leever, but he’s not considered to be a common card, so it will cost a little more to get him. These cards aren’t readily available. For example, Ebay currently has just 100 auctions for cards from this set, all of them for one card each, so basically 100 cards. There are 99 players in the set, so I’m sure you can figure out how easy they are to find from that math. There are two Leevers available, both low grade and they are asking around $80 each. Those aren’t bad prices, especially when you have no other options.