Yesterday we looked at the 1910 E91 set, which some people accuse of being made up solely of generic photos and poor artwork. The 19th century card collecting world has their own generic card set that is somewhat similar to the E91 set, except the artwork is better. In 1887, Buchner Gold Coin Chewing , Tobacco put out a set of cards that consisted mostly of baseball players, 143 different cards to be exact. They are now difficult cards to find and worth some money, though the set has its detractors. Today’s Card of the Day looks at Pittsburgh Alleghenys slugger, Fred Carroll. 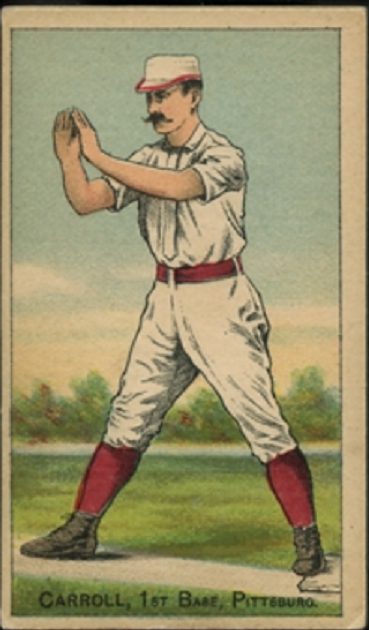 The Buchner set has an “N284” designation, which is just a catalog number that was created many years after the set was produced. The “N” stands for nineteenth century cards, while the 284 was just a random number assigned to the set. The cards are all artwork, though the artists cut corners by using many of the same player poses over and over. You can find other first basemen in the set with the same exact pose.

Carroll wasn’t much of a first baseman. He regular position was catcher, but catching in the nineteenth century was brutal on the hands, so many catchers either didn’t play much, or they also played other positions to give them a rest. Carroll was a slugger and they threw him in the field when he wasn’t catching. At this time, the Alleghenys (and many other teams) used a system where a catcher and pitcher would stay together. With three starting pitcher at most times, you would see three catchers getting work. I don’t know why they labeled him as a first baseman though. In his eight-year career, he played nearly half of his games at catcher. He played left field the second most of any position, then right field, center field, then first base was his fifth most played position. At the time that this set was printed, he had played a total of 42 games at first base over four seasons.

Carroll had an 80 grade mustache when he played, so that is depicted in the card here. Other players using this same pose can be found without a mustache, showing that they at least put some effort into differentiating the players. The problem here though is that a real image of Carroll would look much different. He’s listed now as being 5’11”, 185 pounds, but pictures from 1887 clearly show a heavier man (unless the height was exaggerated). He had much more of a stocky build, barrel chest, shorter legs and arms, but a very strong man. Back when home runs were rare, he had a .499 slugging percentage in 1887, good for seventh in the National League. He led the NL with a .970 OPS in 1889.

Here’s the back of a Buchner card. They came with three different backs, and the cards themselves could be traded for items from a catalog. That probably didn’t happen often, but it was possible for a kid to trade his cards for a pocket knife, so that’s always a good idea. 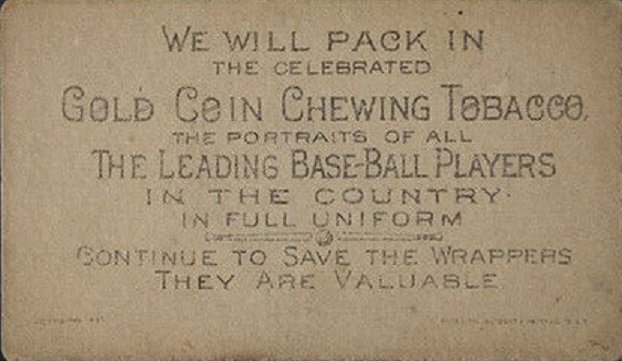 If you’re interested in adding this specific card to your collection, you might have to wait for it. I have one Buchner card in my collection, Pittsburgh outfielder Ed Beecher. Quick story behind that card. Like a typical teenager, I wanted cards of all of the players on the 1887 Alleghenys team. The Old Judge set, which has been featured here numerous times, includes 15 of the 16 players that the team used that season. Yes, they used 16 players over the course of an entire season. Beecher was the only missing player, but he had a Buchner, so I was able to buy that for my team set. I’ll feature that card here some time when I get a chance to scan it. Anyway, individual common cards cost $100+ in low grade. So if you can find a low-grade Fred Carroll card, you’ll be paying about that much. The one pictured above was from an auction earlier this year and it’s a mid-grade card, though mid-grade for Buchner’s is actually high grade due to rarity and age. That card sold for just north of $500. The generic look keeps some collectors away from the set, but the rarity keeps the prices high.