The 1987 Topps Traded set gave Pittsburgh Pirates fans their first chance to get new outfielder Andy Van Slyke on a card that pictured him on the Pirates. He came over to the Pirates from the St Louis Cardinals in the Tony Pena trade on April 1, 1987, long after the regular 1987 Topps set was released to the public. 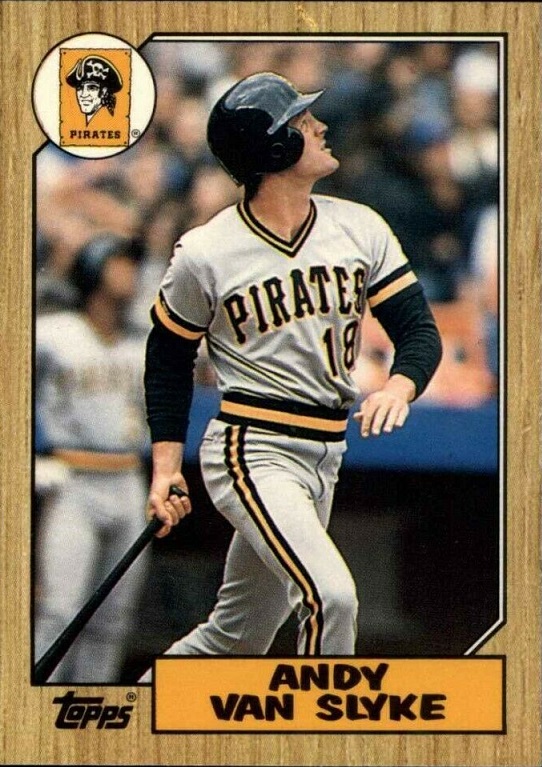 The great thing about traded set cards is that all of the photos are recent and the first looks you get for players with their new teams. Topps had a habit of using older photos, so a 1987 Topps card for Van Slyke on St Louis could have used a 1984 photo if that’s what they had available. We have shown instances here where players are cropped tightly around the face, with no hat, because they never got a photo for them with their new team. That stopped with the production of the traded sets (most of the time…I’m looking at you 1981 Traded Jason Thompson). 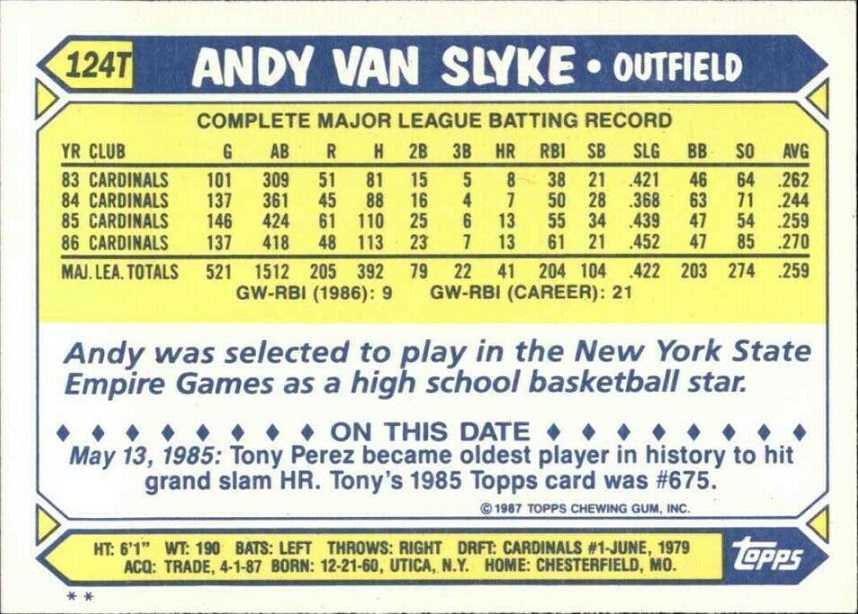 The backs have a similar color pattern as the regular issue, except everything is lighter. The background on the regular series is light gray compared to white here. The yellow is darker on the regular card and a light color here. The blue writing is a lighter blue as well. About the only thing that appears to be the same color-wise is the writing for the stats section and the bio info at the bottom. Even if you didn’t know the color differences, there’s an easier way to tell that this is a traded card. In the top left color is the card number. All of the traded cards have a “T” in the number. The regular series cards have no designation in the number.

For those who don’t remember or never knew, game-winning RBIs used to be a stat that everyone followed. That didn’t last too long, supposedly because players were using it in contract negotiations, or at least that’s how I remember it. Players had a little footnote under their stats, as long as the stats weren’t that big (aka veteran players) that they left no room. Then there’s the “On This Date” which had random dates and facts that had nothing to do with the players.

As you can see with the stats here for his time with the Cardinals, Van Slyke was a solid hitter, with a little power and more speed. His defense took off during the 1985 season, turning him into a more valuable player. He wasn’t the superstar Pirates fans remember him being because that didn’t happen until his first year with the Pirates when he put up an .866 OPS, stole 34 bases and played above average defense. Van Slyke put up 31 WAR in eight seasons in Pittsburgh, compared to 10.2 in four seasons in St Louis.

This card is fairly easy to find. They weren’t sold in packs, so any single card you find came from a factory box set of 132 cards. They printed a lot of those sets and many have been broken up so people can sell the Greg Maddux Topps rookie separately, usually in graded form. You can buy the whole set for about $15, or just get the Van Slyke for about $2 delivered. The set has seven other Pirates cards, including the rookie of John Smiley and the first Pirates cards for Doug Drabek and Mike Lavalliere.