Topps has been known for some bad airbrush jobs over the years on cards, where they put a player on his new team through the magic of awful artwork. Today’s card is a bit different from their normal procedure. Topps often took photos of players without hats, and if the player was traded too late to get a photo while with his new team, they could just crop the hatless player’s face close enough that no markings on the jersey show up, eliminating signs of his old team. However, the 1960 Topps card for Gino Cimoli, who joined the Pirates in a December 1959 trade, didn’t use either one of these methods. Cimoli was born on this date in 1929, making it a perfect day to feature his 1960 Topps card as our Card of the Day. 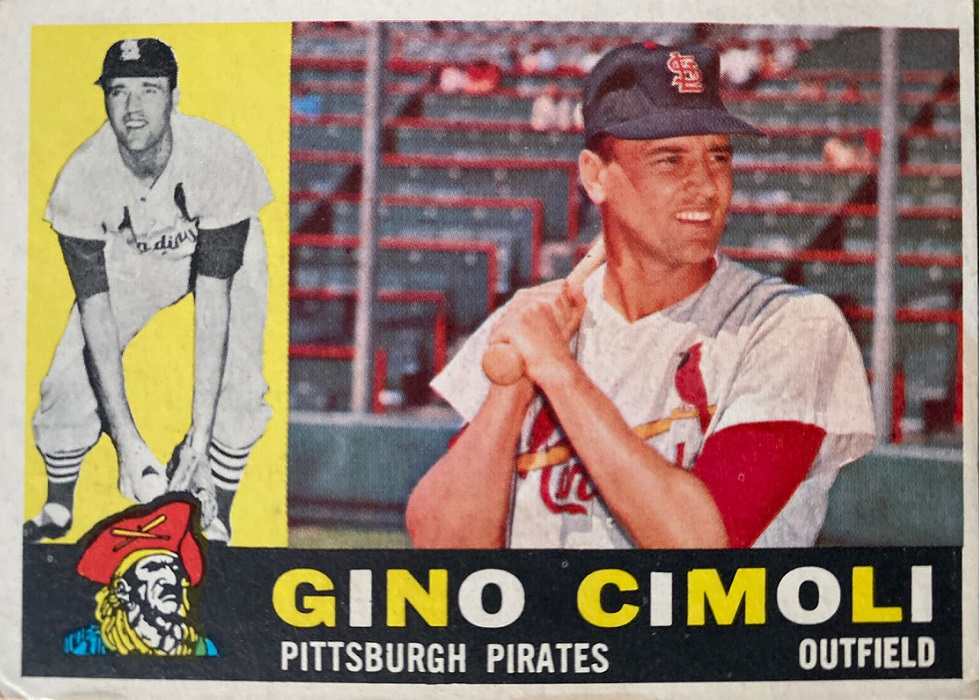 Yup, that’s Cimoli pictured twice, clearly wearing a St Louis Cardinals uniform. The main photo shows those Cardinal reds bright as day. The black & white photo on the side has the entire uniform showing. The bottom of the card is where they let you know that he’s no longer on the Cardinals. That great old Pirates team logo in the bottom left makes every card better. Then the team name is directly under Cimoli’s name, in case the logo didn’t give it away. The colors used for the bottom banner and his name make it look like an added touch of the Pirates, but the 1960 Topps set didn’t have a standard pattern for each team. You can find yellow, orange, blue and black banners at the bottom for Pirates players. Bill Mazeroski has a pinkish/light purple banner with black & white letters. 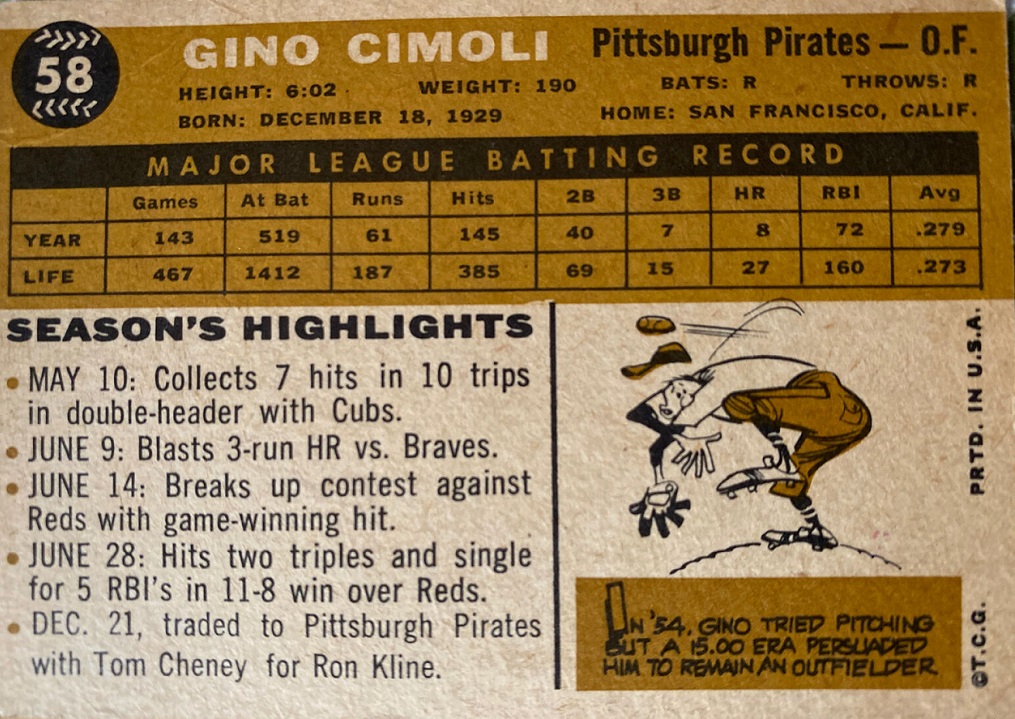 The bottom of the back notes his trade to the Pirates under “Season’s Highlights”. Just four days before Christmas and three days after his 30th birthday, Cimoli was sent to the Pirates, along with teammate Tom Cheney, in exchange for pitcher Ron Kline heading to the Cardinals. The move worked out well for Cimoli. He participated in the World Series as a rookie in 1956 with the Brooklyn Dodgers and came up on the losing end to the New York Yankees. Four years later with the Pirates he faced that same Yankees team in the World Series again and he picked up his only World Series ring. Cimoli hit .267 in 101 games during the regular season, then he batted .250 with four runs scored, while playing in all seven games of the World Series.

The cartoon off to the side notes that Cimoli had a 15.00 ERA as a pitcher in 1954, though it doesn’t mention many details. I wouldn’t say that his pitching performance persuaded him to remain an outfielder. He pitched twice and allowed five runs in three innings while playing for Montreal of the International League. He batted .306 that season in 121 games. I’d say that had a bigger influence on him remaining an outfielder.

If you’re interested in adding this card to your collection, it’s both easy to find and cheap for a 60-year-old card. I checked on Ebay while writing up this article and found exactly 200 examples for sale, most of them under $10. If you’re not picky about condition, you can have this card in decent condition for $4-$5 delivered. Ebay has two recent sales for PSA 9 examples, near perfect in condition. Both of them went for about $120. So it can get pricey if you want one of the nicest ones out there.