Today’s Card of the Day celebrates a member of the 1971 World Series winning Pittsburgh Pirates. Charlie Sands wasn’t a key member of the champs, but he was with the team for the entire 1971 season, serving as the third-string catcher behind Manny Sanguillen and Milt May. Prior to 1971, Sands had one game of big league experience, pinch-hitting for the New York Yankees four years earlier. Sands played 28 games for the Pirates during that magical season and he got to pinch-hit during game two of the series. So on the 73rd anniversary of his birth, we take a look at card #538 from the 1972 Topps set, Charlie Sands. 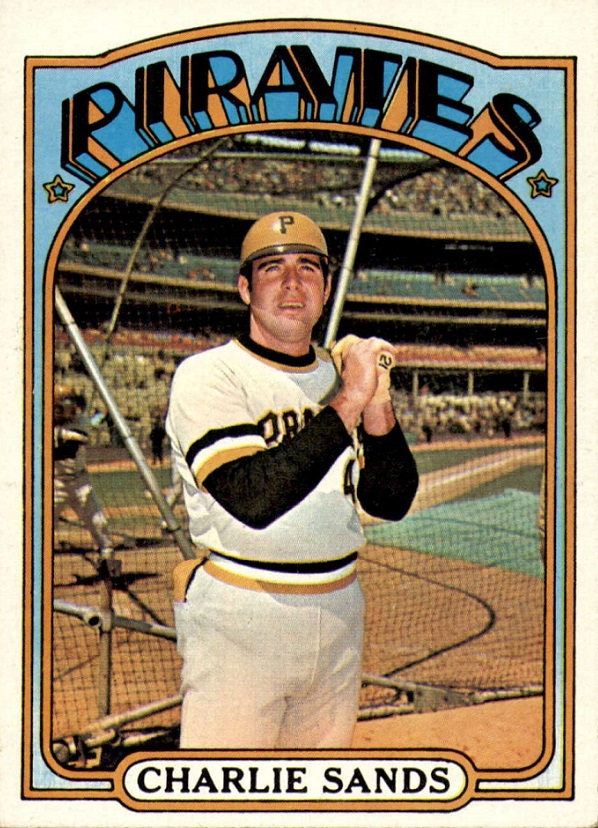 The 1972 Topps set design screams the 70s with that team lettering design at the top of each card. All of the players on the Pirates had this color combo, with a darker orange and baby blue, going into a darker blue for the letters. Due to different printing times for these cards, which were split into series, some of the Pirates can be found with a darker blue between the orange borders. This photo was obviously taken during batting practice before a game, but there is something interesting hidden on this card. Look at the bat knob. That says “21”, meaning that he was holding Roberto Clemente’s bat for the photo. Sands, as seen on this card, wore #4 during his time in Pittsburgh, which also included some time at the start and end of the 1972 season. 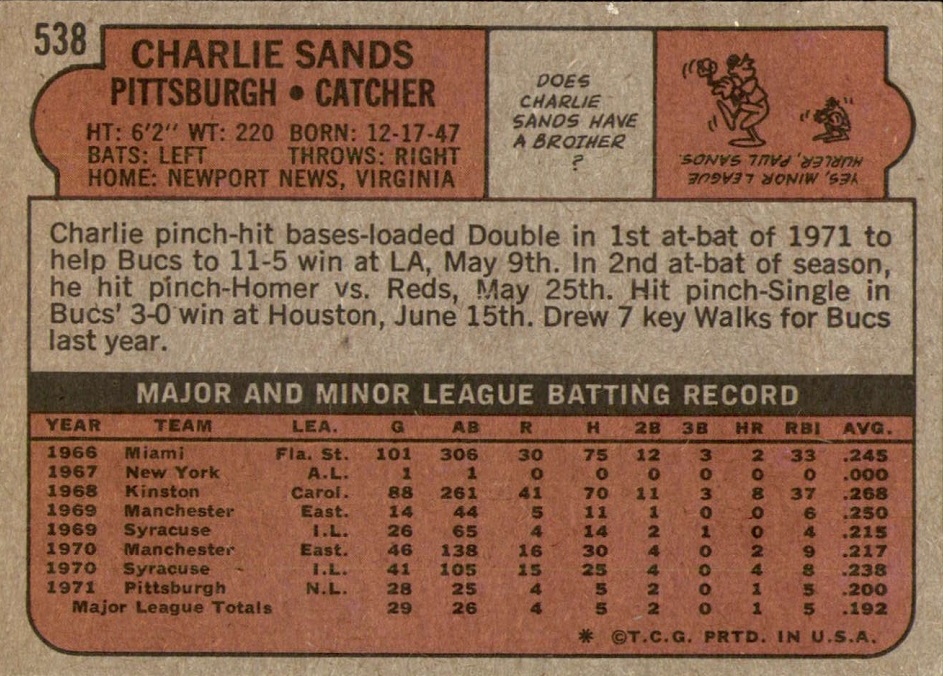 The back had a nice little summary section of his big moments during the 1971 season, including seven key walks. He had seven walks on the season. I wanted to look at those walks, since they aren’t described in detail. Three of those walks came during losses, so they weren’t exactly key moments. He had one walk that loaded the bases on July 20th, then the Pirates scored runs on a ground out and an error to take the lead, so that one could be considered key. He had a third inning walk on May 17th that led to a run. The Pirates were down 5-0 and won 6-5, so that would be key. His walk on June 18th in the eighth inning came with the Pirates down 8-2 and they won 9-8, so that was a key one too. Dock Ellis pinch-ran for him that day. On July 15th, he walked in the 14th inning. However, it didn’t lead to anything and the game went 17 innings. So three of those seven walks could be considered key, while two of them helped lead to big comebacks.

I like that the backs here have complete pro stats so you can see how the player progressed to the majors. They also put the league name, which is a nice added bonus. Topps asked an odd trivia question that I’m sure very few people knew the answer to at that time. In case you wondered, Charlie Sands DID have a brother.

Sands is a high number card in the 1972 set. He’s not from the final series (six series this particular year), which usually is the most valuable one for common prices, but the fifth series in 1972 is also a bit more scarce than cards from the four earlier series. You can grab this card, ungraded, on Ebay for about $5 delivered. A PSA 9, which is nearly perfect condition, recently sold for $50.