Among the former Pittsburgh Pirates born on this date was a left-handed pitcher named Bill Otey. You can read much more about him in our This Date in Pittsburgh Pirates History article posted this morning. I wanted to do something a little different today and feature a player who wasn’t shown on the Pirates. That’s because Otey spent just a short time in Pittsburgh, debuting on September 27, 1907 and playing his last Pirates game eight days later on the next-to-last day of the season. His entire big league career lasted just 100.2 innings over three seasons, mostly spent with the Washington Senators. He had some successful seasons in the minors playing for the Norfolk Tars, which led to a card in one of the most iconic baseball sets ever. Today’s Card of the Day is a 1910 T206 Bill Otey. 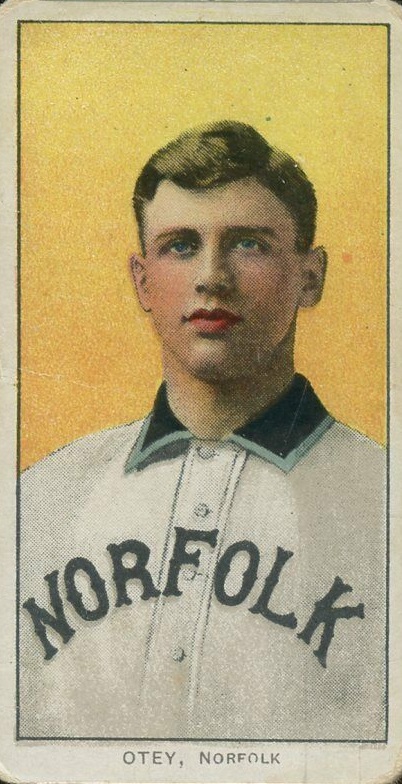 T206 cards feature artwork based on old photos. This is a 1910 card, but many of the minor league players in the set used photos dating back as far as 1903, and they used involved some creativity to update the photo to put them on the right team. In this instance, Otey was actually probably photographed with Norfolk. He was with the team during the 1906 season and minor league team composite photos from that year make up a decent portion of the minor league cards in the T206 set. However, during this time, Norfolk wasn’t written across the front of the jerseys. The team had an N in a diamond on their jersey, as show here in a 1910 team photo (Otey is #15): 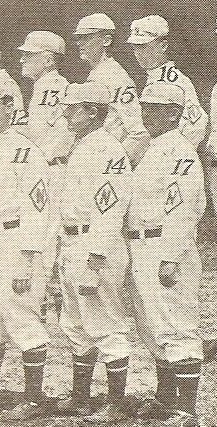 Otey is part of a 48-card subset referred to as the Southern League players. It’s a little confusing, bu the Southern League was actually the name of a league, while the subset called Southern League is made up of players from four different leagues. Norfolk was in the Virginia League. Just one other Norfolk player is in the set, Charlie Seitz, who played 12 years in the minors without a big league shot. 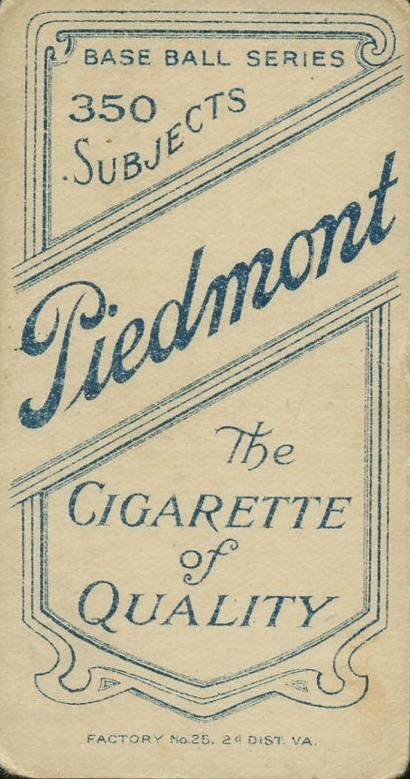 T206 cards came with backs that doubled as advertisements for brands of cigarettes. The most popular brand found in the set is Piedmont. Most cards in the set come with a good portion of the possible brand backs. The T206 set was released in three series, so the possible backs for each player depends on the card’s individual series. Otey was in the 350 subjects series (part two), but being a Southern League player, that limited the back possibilities. As shown above, he came with Piedmont backs, which are the most common by far. Next up would be Old Mill, which is fairly common relative to his availability, but you might have to search a little to find Otey/Old Mill. Then there is the Hindu brand back, which is extremely rare and adds tremendously to the value of this card. Southern League players with Hindu backs are highly collectible.

If you’re thinking about heading over to Ebay as soon as you’re done reading this, you should know what you’re getting in to first. The cheapest one available on Ebay right now (at the time of this writing) is over $300 and it’s not exactly high grade. I collected this set before the prices really took off and finished fairly quickly for the size of the set. As a side note, the t206 set has different levels of complete sets because some card are extremely rare and pricey. I’m in group two (missing the three most expensive cards) consisting of 521 cards. If I was in group one I would have sold my Honus Wagner card years ago. You could also finish with 520 or 518 cards. If I tried to replicate the set now, the 518 number would be my top goal. Don’t let those prices and size of the set scare you off though. There are some very affordable Pirates cards available in the set. If you’re not picky about the condition, you can grab a common for around $25.