Today’s Card of the Day article is a contribution from a gentleman who has already had three articles featured here. Kevin Cummings is a 19th century baseball expert and collector. He has shared two articles already looking at players who were featured in the 1886-90 N172 Old Judge, which in my personal opinion is the greatest baseball card set ever created. Over 500 players and 2,500 poses total, with variations for poses that puts the total number of possible cards in the set WELL over 5,000…yet there are likely fewer than 50,000 examples still in existence from that era, as time has done a number on the initial population printed.

Mr Cummings has written up a bio for Charles “Pop” Smith, who spent five seasons playing in Pittsburgh with the Alleghenys. The first two years they were in the American Association, then the franchise flipped over to the National League and he played there for another three seasons. Smith has four cards in the Old Judge set. All four of his poses show him on Pittsburgh, but two of those cards were also reissued in 1889 when he sold to the Boston Beaneaters. Today’s featured card has been designated as pose #1 for him and it’s called “stooping to field grounder”. The cards in the set all have pose descriptions  and their actual catalog number came along many years after the set was printed. The set was put into alphabetical order for the catalog, making this card shown below #426-1. 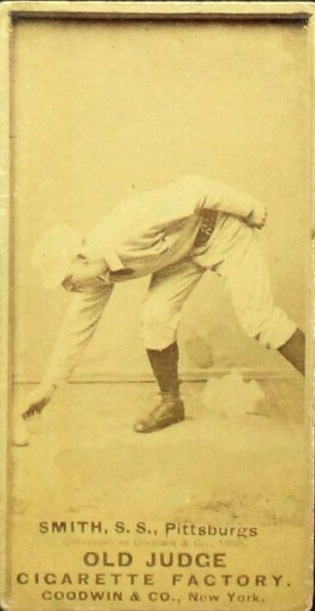 In 2001, Bill James named Charles Marvin Smith to his “All-Canadian Team” in The New Bill James Historical Baseball Abstract. To be honest, the bar was set pretty low. Of the 255 Canadians who have ever played Major League baseball, only 16 have played in more than 1,000 games and none of them played anywhere near as many games at second base as Smith did. Smith has been called the finest fielding second baseman to have ever come out of Canada to play baseball in the United States. Though Bill James did not rank Smith in his Top 100 second baseman of all time, Smith’s fielding statistics compare favorably to seven of his contemporaries who were on the list, but were simply better batters.

Little is known of Smith’s family or his early years. Though he was born in the coastal city of Digby, Nova Scotia, on October 12, 1856, he probably did not learn his baseball skills there. As a youth, Smith likely had little time for sports or even school. Working-class children in the Canadian Maritime provinces typically left their book studies early to learn a trade and help support the family. His family moved to Boston in the 1870s, perhaps during an economic downturn in Nova Scotia after the US Civil War, and he likely learned the game in Massachusetts. By 1874 in Boston he had worked as a laborer and played baseball on amateur teams in the Massachusetts Bay area.

In 1876 at the age of nineteen, Smith began playing professionally with the Binghamton Crickets, an independent professional team from New York. He returned to Binghamton in 1877 for a second summer. In 1878 most of the players from the 1877 Crickets moved to Utica, New York to play on their team. From Utica he moved in 1879 to Springfield, Massachusetts, to play for their newly created National Association club. During all four seasons, he played third base, not the position for which he is most well known.

The year 1880 was Smith’s first in a major League uniform. He played all 83 games at second base that season and led the Cincinnati Reds with 27 RBIs and nine triples, yet batted only .207. Despite having a team with decent talent (including future Hall of Famer Deacon White), the Reds ended up in the National League cellar and then out of the league entirely. After that, Smith could not find a full-time job with Worcester, Buffalo, or Cleveland in the National League in 1881 or Louisville or Philadelphia in the American Association in 1882. He appeared in only 47 games, collected only 15 hits, and batted a nearly-invisible .093 over that period. Although his playing career seemed to have cratered, he did have one highlight: umpiring the first interleague series (a precursor to the World Series) in Columbus, Ohio between the two league champs – the NL’s Chicago White Stockings and the AA’s Cincinnati Reds. Having played in both leagues, both managers knew Smith to be a well-liked and impartial individual. Their faith in him was not misguided. The Cincinnati Commercial reported that Smith umpired “…in splendid style…”

Having taken the umpiring job proved a turn of Smith’s luck. The Columbus Buckeyes were preparing to enter the American Association, saw his work ethic, and signed him for the 1883 season. As their regular second baseman he responded with his best season in the batter’s box – a .262 average; hit his first home run; and led the Buckeyes in runs, on-base-average, and slugging percentage. His 17 triples led the entire American Association. The near-pennant 1884 season was more of the same – a career high six home runs and leading the league in assists by second basemen for the first time. Despite the Buckeyes’ on-field success, however, the club declared bankruptcy following the season.

Smith, along with several other Buckeyes, was transferred to the Pittsburgh Alleghenys for 1885. Smith enjoyed five solid seasons with his new team. Playing second base and batting lead-off in 1885, Smith led the club in runs scored while batting .249. He also enjoyed his best year in the field, leading American Association second basemen in putouts and assists. In 1886 Sam Barkley came over from the Saint Louis Browns, so Smith switched to shortstop. No problem. For the second year in a row Smith ranked the best at his position. He led American Association shortstops in fielding average and teamed well with Barkley to give Pittsburgh a very smooth double play combination. Dropped to third in the batting order, Smith hit only .217, but did lead the team in stolen bases in the first year stolen bases were recorded.

Pittsburgh joined the National League in 1887 and Smith was moved back to second base. He struggled even more against National League pitching than he had in the American Association, managing just a .215 batting average. In 1888 Pittsburgh acquired Fred Dunlap specifically to play second base and Smith was moved back to shortstop. His batting average continued to plummet, but his fielding was ever-steady. By the end of the 1880s, players started calling him “Pop” and certainly not because of the way he hit a baseball. He had been in professional baseball for almost ten years and his mustache, bushier than ever, made him look older than his years.

Pop’s poor batting statistics finally caught up with him in 1889. Mid-season he lost his shortstop job to Jack Rowe, who was a much better hitter. As a testament to Smith’s value as a fielder, though, the Boston Beaneaters dealt for him to bolster their stretch pennant run. Invigorated, he hit a solid .260 for Boston. For the season, he had a career-best 59 runs batted in and 23 doubles. Despite his efforts, however, Boston fell a game short of the pennant.

In 1890, all of the Boston starters except Pop jumped to the renegade Players League. No one knows why Smith stayed in the NL, but manager Selee named him captain. Buoyed by the decision, Pop led the team in walks, triples, and total bases while stealing a career best 39 bags, but he also batted a measly .229, struck out a league high 81 times, and committed 57 errors. That was Pop’s last full year in the Major Leagues.

When the PL went out of business, Selee reconfigured the Boston NL club for 1891. He put Joe Quinn at second base and Herman Long at shortstop, leaving Pop without a job. Smith caught on with Washington for a time, but his .178 batting average was not good enough to earn him a starting job even on the worst team in the majors. Over his 12-year career, he finished with a .905 fielding average, quite high for the time. After leaving the majors, Pop played in the minors for ten teams in five seasons. He saw action in Omaha, St. Paul, and Fort Wayne of the Western League; Atlanta in the Southern League; Binghamton, Erie, Rochester, Providence, and Toronto of the Eastern League; and Binghamton again in the New York State League.

When he finally retired from baseball, Smith returned to Boston, where he had lived since moving from Canada, and worked as a motorman on the Boston trolley system for the remainder of his working life. He died April 18, 1927, at the age of 70. Never much of a batter, he is associated with two hitter’s records: On April 17, 1890, Smith became the first player to come up to the plate six times and not have a single official-at-bat (receiving 5 walks and being hit by a pitch in the final at-bat); and he scored the most runs all-time by a player with a sub-.225 batting average. No one else has even come close. In 2005, Charles “Pop” Smith was inducted into the Canadian Baseball Hall of Fame. Bill James knew what he was talking about.

Here are the other offerings from Mr Cummings