Today’s Card of the Day features a set of twins who played for the Pittsburgh Pirates and they were born 90 years ago today. In 1954, Topps included a card in their set that featured Johnny and Eddie O’Brien, twins who debuted for the Pirates in 1953 as a double play combo after receiving a combined $80,000 bonus to sign in March of that same year. Both brothers were star basketball players in school despite each being 5’9″, but they were just as good at baseball and they spent five seasons each in Pittsburgh with the Pirates. This card was their first one after signing and Topps decided to put them on the same card, which makes it still stand out to this day in the 1954 set, even if neither player reached their full potential in the majors. 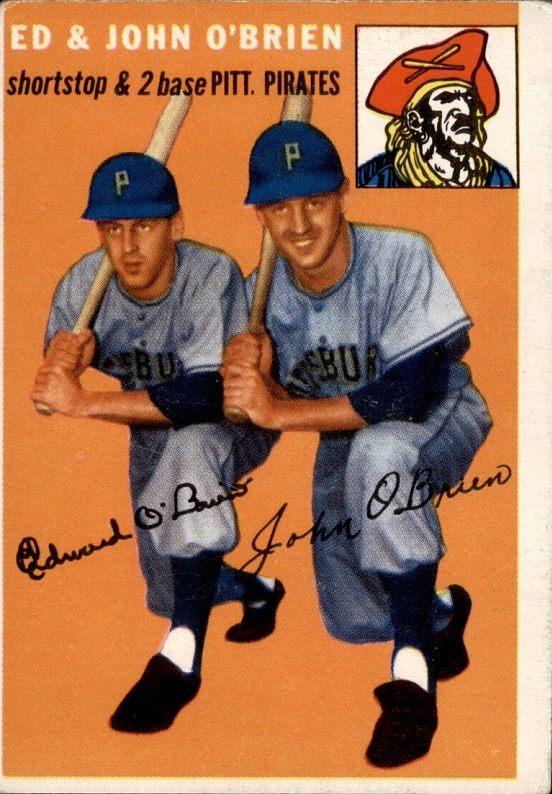 As you can see, Topps had them in the same pose, with artwork here based off of a real photo. Eddie on the left as the shortstop and Johnny on the right as the second baseman. The card includes facsimile autographs to help tell each player apart, and there’s the great old school Pirates logo in the top right corner.

You can’t tell from the picture, but 1954 Topps cards are a little bigger than the standard card size from today. In the early years of Topps, the cards measured  2-5/8″ by 3-3/4” compared to 2-1/2” by 3-1/2″ that is commonplace now. It’s a small difference on paper, but if you’ve only handled cards from the last 50 years and you pick one of these up for the first time, you’ll notice the difference. 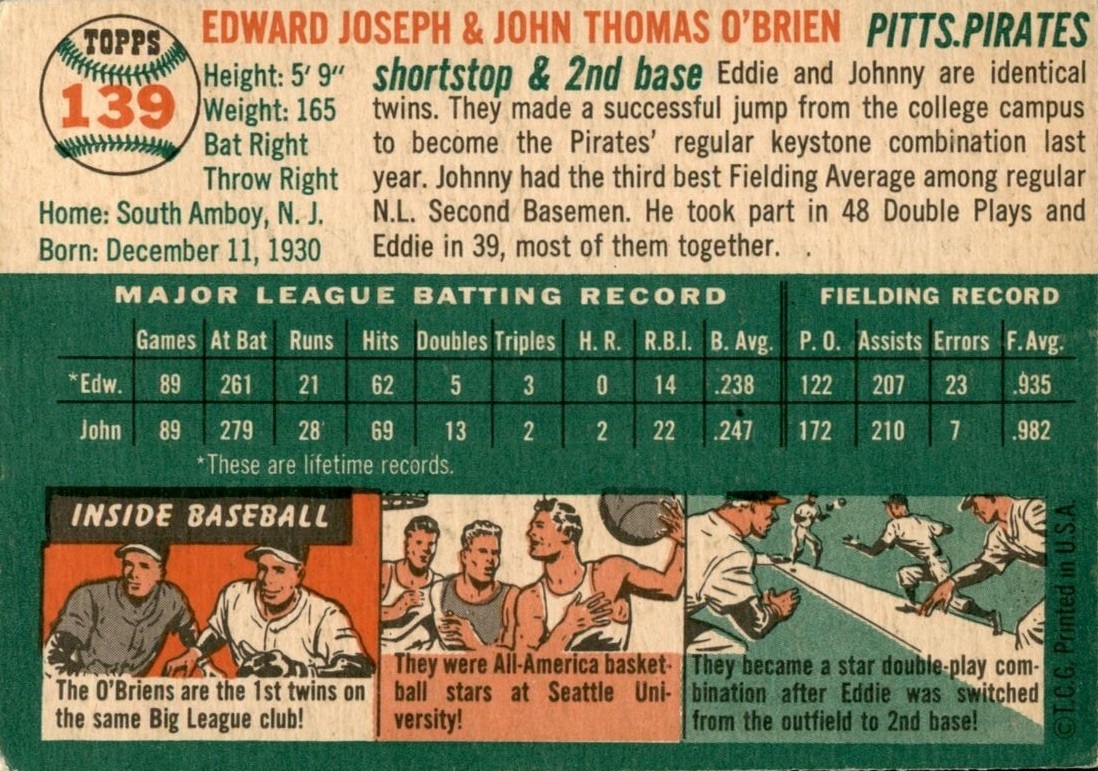 I love the back of the 1954 Topps cards and it starts with the simple, yet great, Topps logo in the top left. A baseball that also holds the card number. The green/white/orange colors really look great together and the back has a lot going on. Topps only included one year of stats on the back for all players, along with their career totals, so the stats part of the back didn’t take up a lot of room, even for a veteran. It worked out well here for the O’Brien twins because they each had one year of stats, so those were also their career totals. Even though both were on the same card, their stats took up the same amount of room as everyone else in the set. It also helped that they had the same information for the bio part in the top right, though most sources credit Johnny for being slightly heavier than his brother. Those things led to a bigger section for some bio info regarding their brief time with the Pirates up to that point.

The fun facts at the bottom are great on these cards, though the first one was incorrect. The O’Brien boys were not the first twins on the same MLB team. That honor belonged to Joe and Maurice Shannon, who played one game together for the 1915 Boston Braves. Fun fact on their only game together. The Braves had two future Hall of Famers as their double play combo, with Rabbit Maranville at shortstop and Johnny Evers at second base. In the final game of the 1915 season, they were pulled mid-game and the Shannon twins took over for them, with Joe going to second base.

The second cartoon notes their basketball skills, while third cartoon notes that they were not always a double play combo and that actually became true in the majors as well. Both brothers were in military service for the 1954 season, but when they returned in 1955, Eddie played mostly in center field, while Johnny remained at second base. As you probably read in today’s This Date in Pittsburgh Pirates History article, both brothers were given shots on the mound during the 1956-58 seasons.

If you’re interested in this card, and I assume that everyone is now, it can be had on Ebay for about $15 delivered in decent shape. A few PSA 8 examples have ended recently and they went for over $300 each, while a PSA 6 ended for $84 just two weeks ago.