Today’s Card of the Day features Pittsburgh Pirates outfielder Adam Comorosky, who played for the team from 1926 until 1933. During the 1930 season, he accomplished a feat that no one else in baseball history has matched before or since. That year he had 47 doubles, 23 triples and 12 homers. No other player in MLB history has reached those three numbers in the same season. Comorosky was born on this date in 1904, so his most popular baseball card is today’s subject. Here’s his 1933 Goudey card, #77 in the iconic set. 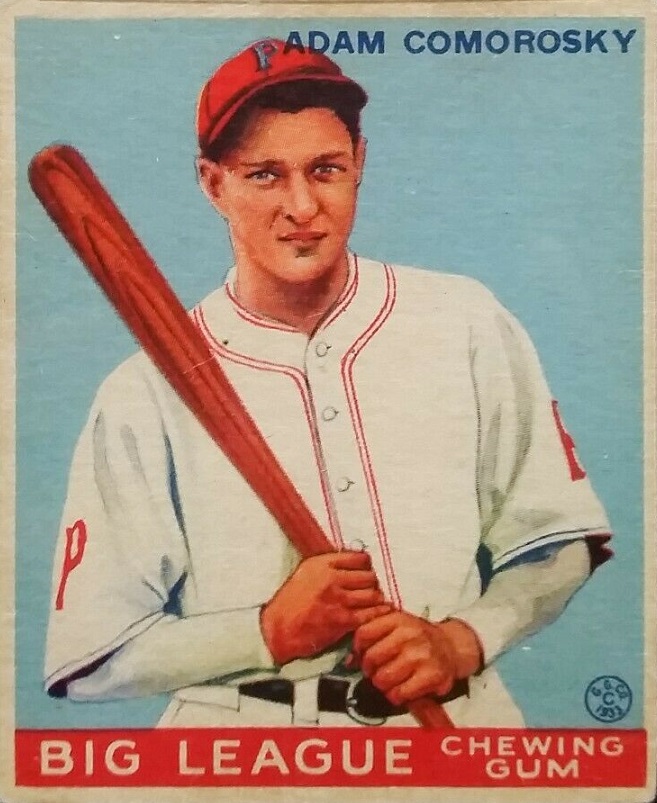 The 1933 Goudey set has a total of 63 cards that feature Hall of Fame players, including four Babe Ruth cards and a Nap Lajoie card that was printed in 1934 and had to be requested by mail. That made Goudey unpopular with collectors back then, who were chasing a card that didn’t exist at the time, but now the card is on the wantlist of many collectors. Those things have made it one of the most popular pre-WWII sets with vintage collectors, possibly only trailing the T206 set, which features the holy grail of baseball cards, the rare Honus Wagner. The Goudey set has 240 cards total, with some great artwork, colorful backgrounds, and an otherwise simple design, with a white border, a “big league chewing gum” ad at the bottom and the players name at the top. The team name was listed on the back.

Since these card designs were based off black and white photos, they didn’t always get everything correct. The jersey style on the card was used by the Pirates during his first six seasons in Pittsburgh, but the red you see on the jersey/hat was actually blue. The colors on the hat should be reversed, with a red P. There are a few sets from the earlier years of baseball that got the colors wrong for the Pirates. 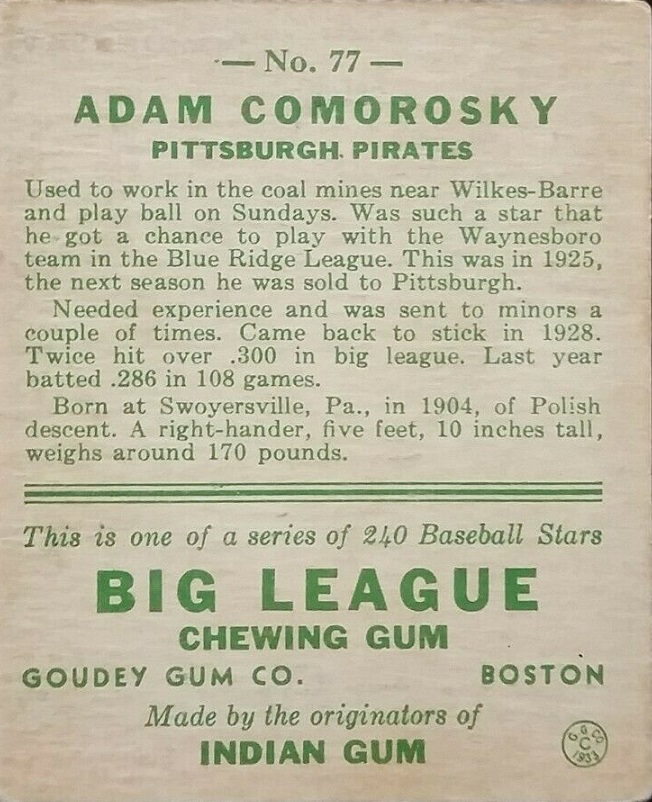 The back of these cards all have bios on the player, with a nice looking green writing on a white background, making for an easy read. Comorosky’s card notes that he worked in the coal mines until he got a chance to play pro ball at 20 years old. During those coal mining days, he played Sunday baseball and impressed. He debuted in pro ball with Waynesboro as noted on the card, but he also played for Williamsport of the New York-Penn League at the end of 1925 and all of 1926, before the Pirates bought him in August.

As noted on the card, it took him some time to catch on, but once he did, he had a nice run with the Pirates. Truth be told, baseball saw an offensive spike in 1929, then in peaked in 1930, followed by a major down-tick in runs the next year. Comorosky’s career follows that same path. He just happened to do something that no other slugger could do during that time, which makes his 1930 season stand out. Also of note on this card, the fact that it mentions that he is of Polish descent. It wasn’t uncommon during this era for the media to mention a player’s ethnicity, or their religion, or even their political affiliation, though many players wisely chose independent when asked to avoid that whole sticky subject.

If you’re interested in this card, they are plentiful on Ebay. It was a popular set that was mass produced, so many examples have survived these 87 years. Since it is popular, many dealers have them for sale and you have multiple choices in various grades. If you just want a low grade filler, then you can find examples for around $10. If you want a more presentable card, one that would get the grade Very Good, then you will be paying about $20. That’s the price range I’d be looking for, and these cards will always hold value (or possibly go up) because of the popularity of the set. There are so many Hall of Famers in the set that many people enjoy the challenges of trying to put a full set together. That means that there will always be a call for the common cards. Comorosky had that one extraordinary season, but he’s still a common card in the set, and that’s reflected in the price compared to the name players. A PSA 5 Comorosky will set you back around $100, which a few recent sales in that range. In comparison, a PSA 5 Lloyd Waner recently sold for $438.