I’m doing something different today on the 43rd anniversary of the Pittsburgh Pirates acquiring Hall of Fame pitcher Bert Blyleven. Until today, he had not been a Card of the Day subject, so I started looking through his options with the Pirates. That’s when I saw his 1981 Fleer and 1981 Donruss cards side-by-side and had to feature both of them. You will see why with the photos.

Here’s the front of the Fleer card: 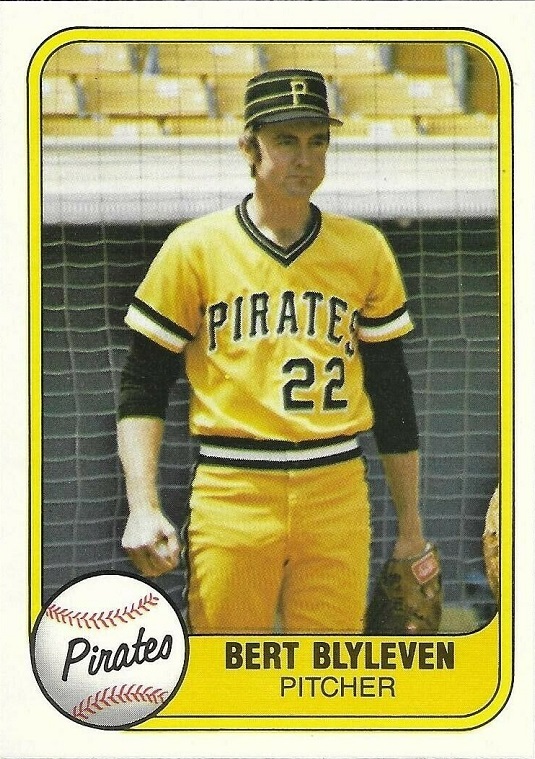 Here’s the front of the Donruss card: 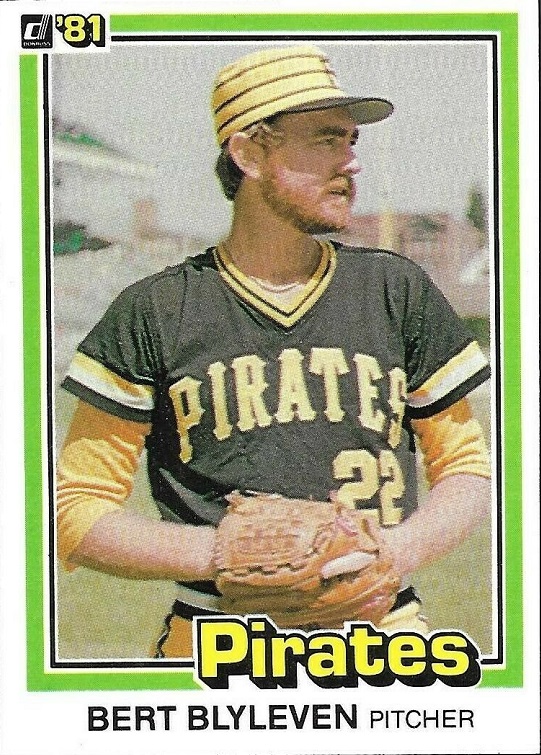 Both of these companies released full sets for the first time in 1981, so you know that these photos were both from the 1980 season. I could be wrong, but they appear to be from Dodgers Stadium (Fleer) and Wrigley Field (Donruss). That part really isn’t important or the reason I featured both cards in one article. The reason is because Blyleven looks completely different on the two cards. If you found someone who didn’t know anything about him, it wouldn’t be hard to convince them that one of these cards is an error card. I can assure that they’re both showing a future Hall of Famer (at that time) who was born in the Netherlands. He looks like a 60s junkball pitcher on the top card, and he’s thinking about a Bee Gees song on the bottom card.

Blyleven had a rough 1980 season with the Pirates, going 8-13, 3.82 in 216.2 innings. He was 29 years old and had 156 career wins, well on his way to 287 career wins. He also wasn’t with the Pirates at the time that these cards were being released. He was traded to the Cleveland Indians on December 9, 1980. In fact, one of the players he was traded for, Bob Owchinko, is on a Donruss card that lists him as being with the Pirates. We featured that card here recently.

As for the cards themselves, the Fleer card has so much gold/yellow between the uniform and the slightly lighter border around the photo, plus those visible seats just adds to it. The Donruss card features the epitome of the mix-and-match uniforms from that era. Gold pants, black top, gold undershirt, gold pillbox cap. I think a large majority of people like the black pillbox cap better, but the gold one is really growing on me…much like that beard grew on Blyleven for the Donruss photo. It really does look like two different players, did I mention that?

If you want either one of these cards, they can both be found cheap on Ebay, despite the fact that he is a member of Cooperstown. You should be able to get either of them delivered for $2. If for some reason you had to choose and couldn’t decide between which one, I’d suggest the Donruss version because of the back. Donruss added some bio info, while Fleer was strictly stats, though they did include his brief minor league stats. Donruss has 1980 and lifetime stats only. At least for this year, they sacrificed stats for the extra highlight info. Whichever you choose, you can’t go wrong at that price for a 39-year-old card of a great pitcher. Or you can just grab the 1981 Topps card and get all three at the same time.