On this date in 1983, the Pittsburgh Pirates acquired left-handed pitcher John Tudor in exchange for outfielder Mike Easler. After going 12-11, 3.27 in 32 starts for the 1984 Pirates, Tudor was traded to the St Louis Cardinals. The deal happened one year and six days after the Easler trade, which made it late enough in the off-season that Tudor’s 1985 Fleer card was already in production, still showing him as a member of the Pirates. If you like gold, you’re going to love today’s Card of the Day, #479 in the 1985 Fleer set featuring southpaw John Tudor. 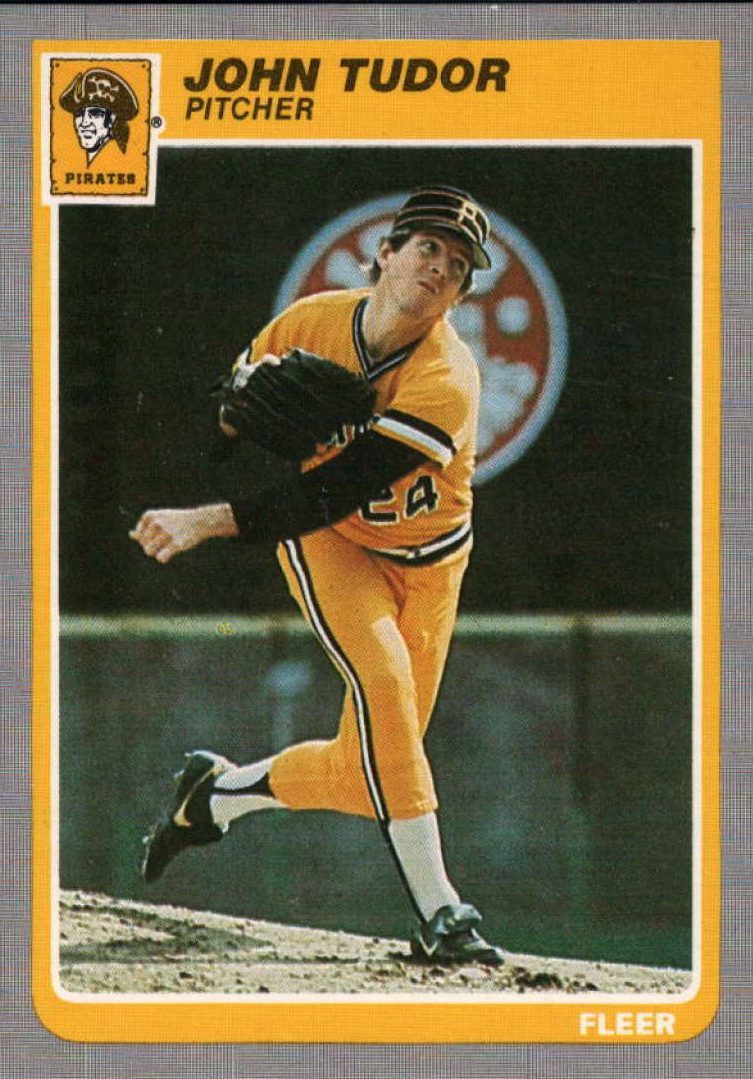 I wouldn’t say I’m a huge fan of the 1985 Fleer set, but it is one of my favorite looking offerings from them. As a quick personal side note, I was once asked about my favorite Topps, Fleer and Donruss sets from the 1980s. After thinking about it and looking at them for comparisons, I ended up picking the 1987 sets for all three of the top manufacturers from the decade. It was purely coincidental too, didn’t even realize it until I repeated all three favorites after making the final choice. Anyway, I’d probably rate the 1985 Fleer set third for the 1981-90 offerings. I like the 1982 set better, but not as much as the 1987 set.

Anyway, back to this Tudor card and I promised you that if you enjoy the gold from the Pittsburgh black & gold, you would enjoy this card. In 1985, Fleer used a team color for the inside border. All of the cards had a gray outer border, but the inside depended on the team, and Pittsburgh got gold. Add in the fact that the Pirates were wearing gold jerseys and pants on the day that this photo was taken, and you have a lot of gold.

Since he only played one season for the Pirates, it’s easy to narrow down when this photo was taken. That circle behind him tells you that this photo was taken at Veterans Stadium in Philadelphia. He started there three times in 1984. It wasn’t the first game of the season because that was a night game (7:35 start) in April and you can tell that it’s not a night game photo (6:44 sunset in Philadelphia that night, I checked). The second start was a June 9th game and I found a photo from that day showing the Pirates in black tops. That means that Fleer didn’t get Tudor’s photo until the final day of the season on September 30th, which was a day game. I couldn’t find a photo to check, but there aren’t any other options. Chances are that they had other photos of him to use, but chose the final game photo for their set.

Finally, the Pirates logo from that era always added eye appeal to any set that used it. If you don’t love that logo there is something wrong with you. 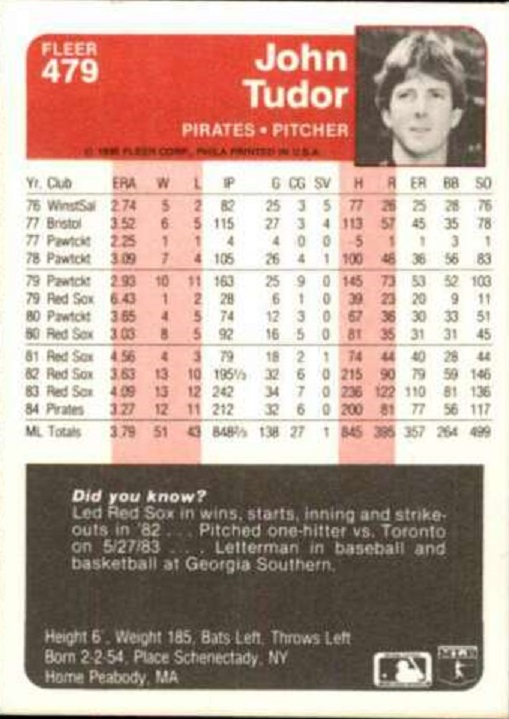 I like the back of 1985 Fleer cards as well. If you’re new here, I like cards with easy to read stats, and using black letters/numbers on a light background is always a winning combination. This card has a mini bio, an added photo on back and his minor league stats. That’s good enough for me.

If you want this card, it’s an easy common to find on Ebay and you’ll pay about $2, with part of that being the delivery cost. What I suggest is to go for the team set instead, paying about $4 more. You can get Tony Pena, Johnny Ray, Bill Madlock, Kent Tekulve, Dale Berra, Rick Rhoden, John Candelaria, Jason Thompson and 13 other cards called etc. I’ll point out that you have some options with this option. Some people included the Lee Tunnell specialty card we covered here. Others include the Tunnell and the Updated cards, which weren’t part of the base set. So you’ll see different numbers listed for a complete team set. None of them are wrong (unless the number is under 21), so you might want to pay a dollar or two extra if it has more cards.