Today’s Card of the Day has to be one of my all-time favorite common cards. The 1982 Topps set is one of my favorites because it has some great photos from what looks like infield practice during Spring Training of 1981. One of the first cards I did when we started this feature was the 1982 Topps Tim Foli card, which can be seen here. In that article I also included a photo of Dale Berra’s 1982 Topps card. Both of those cards were mentioned due to the attire they were wearing that day, which I strongly believe needs to be a future throwback uniform. The 1982 Topps card of Kurt Bevacqua was probably taken minutes/seconds before/after the photos of Foli and Berra. He isn’t wearing the same warm-up jacket, but he is featured in one of the more popular uniform styles in team history. 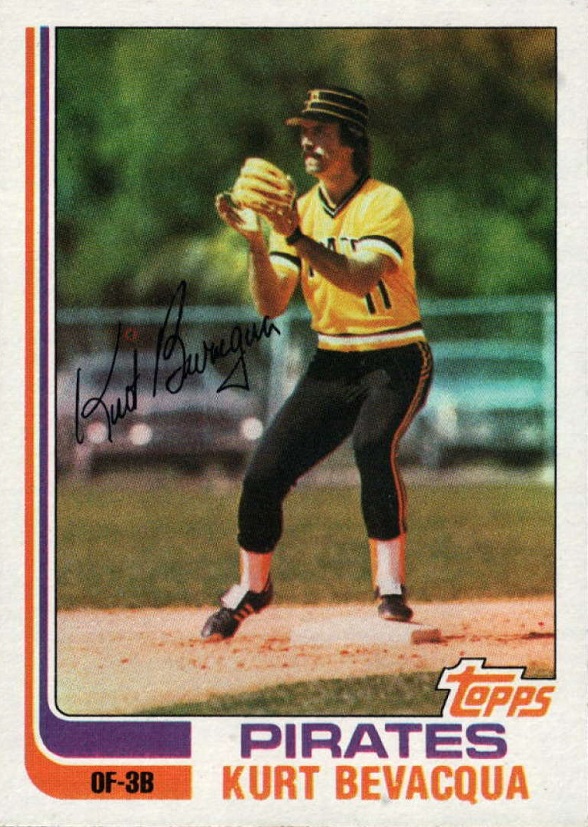 One of the interesting things about this photo is that Bevacqua was listed as an outfielder/third baseman, but he is clearly playing second base in this photo (I say that because it’s a 1981 photo, but with shifts now he could be playing third base here and taking the feed from the left fielder).

You can see why I chose to feature this here. The gold tops, black pants and pillbox cap in an action shot. You also get the true Spring Training feel here with the chain-link fence in the outfield, along with two old cars visible in the photo, though they appear to be somewhat new for the time that this photo was taken in Feb/March 1981.

Topps included facsimile autographs on the front of cards and Bevacqua has one that one can really appreciate. If you collect autographs, you know that some current players have awful autographs. Not naming any names, but a current player who we will call Jameson T….no, that’s too obvious. We will call him J. Taillon. His autograph looks like the number 2, followed by him practicing drawing check marks. You wouldn’t be able to guess it’s him if you took one thousand guesses after I told you that it was a current Pirates player. 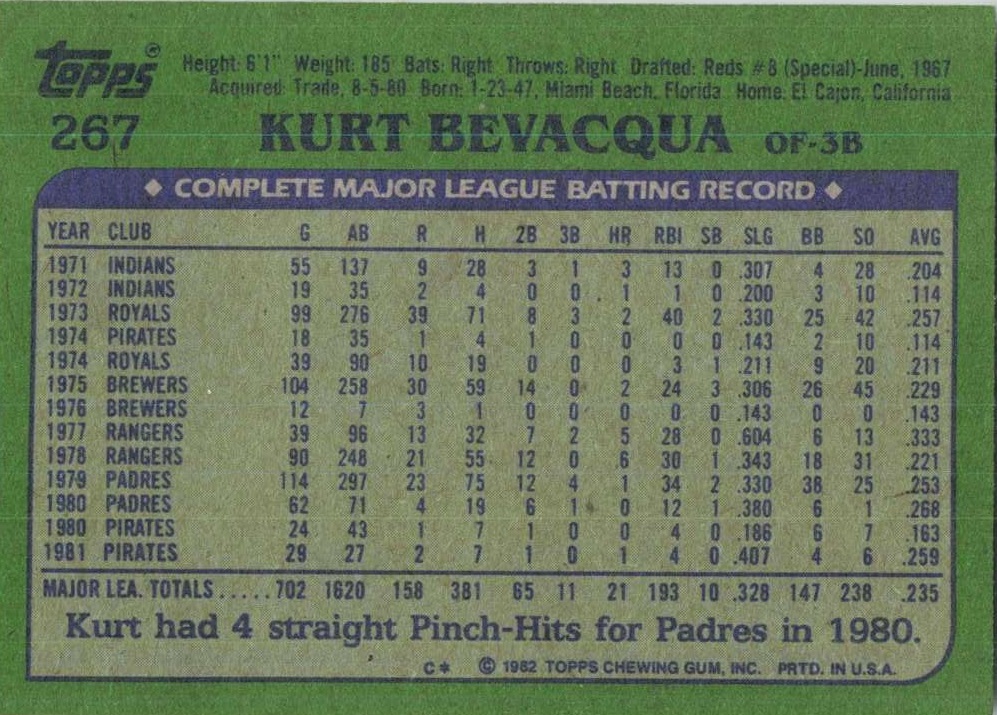 I decided to feature this card today because the Pirates acquired Bevacqua on this date in 1973. As you can  see on the back, he briefly played for the Pirates between stints for the Kansas City Royals. His actual time spent with the Pirates during that stint was seven months. He returned to Pittsburgh in August of 1980, then he was released after the 1981 season. I’ve mentioned here numerous times that the cards are put out well before the season that matches their year starts. As in, 1982 Topps cards were in full production shortly after the 1981 season ended. The Pirates released Bevacqua on October 26, 1981. He didn’t sign with another team (San Diego Padres) until April 2, 1982, so people were getting these cards long after he was gone from Pittsburgh, but they didn’t know where he was ending up. Later in 1982, Topps included Bevacqua pictured on his new team in the Traded set.

Bevacqua is not a fan of WAR. Before it came around, he was perfectly happy with the claim of fame that he played 15 years in the majors. Not many people in this world can say that and it’s something to be extremely proud over. However, Bevacqua was probably lucky that he began his career in 1971, because he finished his career with -3.9 WAR. He had nine negative WAR seasons, one with 0.0 and three with 0.1 WAR. His .970 OPS in 39 games in 1977 was easily his high water mark, helping him to 1.2 WAR.

As I said, this is a common card, so you can imagine that the price is cheap. You’re mostly paying shipping when getting one of these cards, but we are still talking about plenty of options in the $2 range. He’s not known for being with the Pirates and his overall playing time in three seasons amounted to 105 at-bats, but it’s a 38-year-old card featuring a great photo from a great set, so why wouldn’t you want it?