Today’s Card of the Day features a player who made a huge impression with Pittsburgh Pirates fans, despite being around for just one season. Reggie Sanders turns 53 years old today. He spent the 2003 season with the Pirates and put up big numbers, batting .285 with 31 homers, 87 RBIs and 15 stolen bases. In his 17-year career, which was covered this morning in our This Date in Pittsburgh Pirates History article, Sanders amassed over 300 stolen base and 300 homers, one of just eight players to accomplish that feat in MLB history. So today we take a look at one of the few cards released during his brief time in Pittsburgh, and my favorite among the group. Here’s Reggie Sander’s 2004 Topps Heritage card. 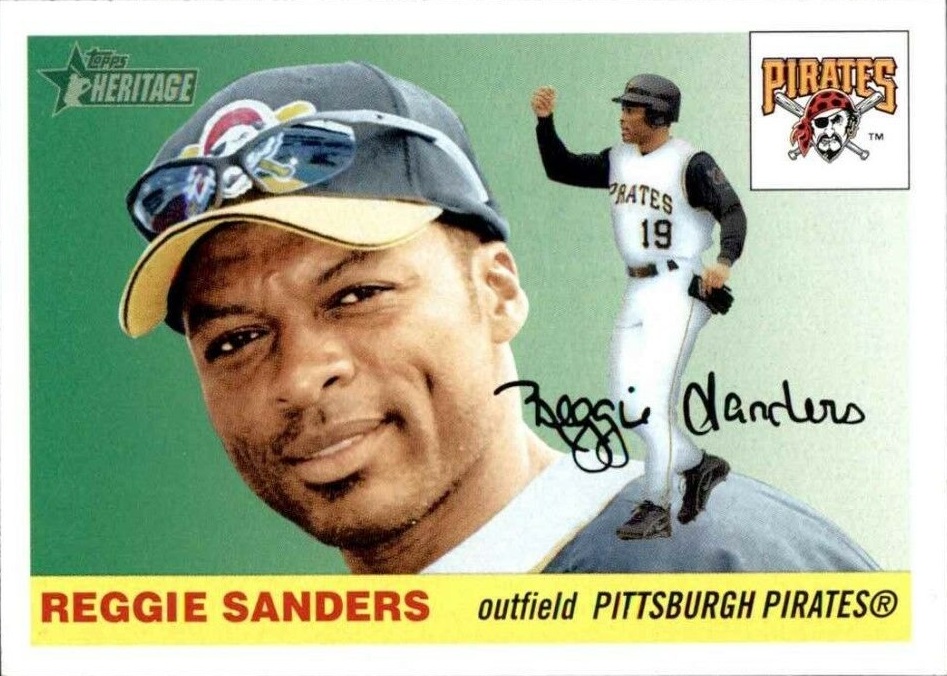 Sanders is shown here on the front twice, which pays homage to the 1955 Topps set. If you’ve ever seen the Roberto Clemente rookie card from that set, you’ll know that this card is almost the exact same look. Topps included a portrait photo of the player along with a smaller action shot, plus a facsimile autograph of the player. The only real difference here between the Clemente look and Sanders is at the bottom with the name. Clemente had a red border and white letters for the name. The position and team name on both cards are the same.

Topps included other Pirates in the 2004 Heritage set and just like in 1955, they have assorted colors for the background. Examples would be blue for Kip Wells, red for Jack Wilson and yellow for Zach Duke. 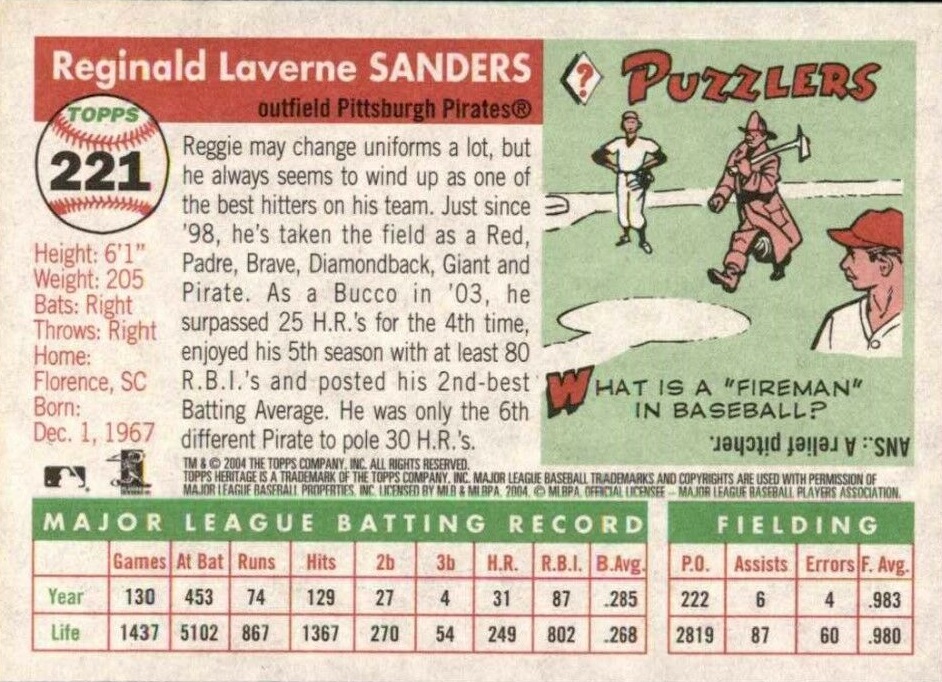 The back of the card is exactly like the 1955 Topps setup as well. They even went as far as including fielding stats just like in 1955. Fielding stats were more popular to include in the early days of cards, but they got completely dropped in favor of more hitting stats in 1958, brought back in 1959, then dropped again in 1960.

The back has a nice bio section for everyone, which was made possible by only including the 2003 stats and the career stats, which was also what they did back in 1955. Sanders’ bio mentions that he moved around a lot, but still performed everywhere he went…well, not in Atlanta, but we will forgive him for one down season. From 1998 through 2004, he played with a new team each year.

I liked the bio fact about Sanders becoming the sixth Pirates player to hit 30 homers in a season, until I started thinking about the first five and realized that it was off by quite a lot. Willie Stargell, Barry Bonds and Ralph Kiner are the big names in that club, joined by Dick Stuart, Bobby Bonilla, Dave Parker, Jeff King, Jason Thompson, Brian Giles, Aramis Ramirez and Frank Thomas. Sanders was actually the 12th Pirates player to reach 30 homers in a season. He has since been joined in that club by Josh Bell, Andrew McCutchen, Jason Bay and Pedro Alvarez.

Also reminiscent of the 1955 backs is the cartoon on the side. There were a few categories, such as baseball definitions, which they dubbed “daffy-nitions”. There were true-false cartoons, as well as the puzzlers, which asked a question and gave the answer upside down just below the question. The cartoon usually had nothing to do with the player pictured on the card.

If you want to add this card to your collection, you are in luck. These are common cards, so you’re going to pay about $2, which includes the shipping. They aren’t plentiful on Ebay like some cards we feature here, but you’ll have no trouble finding one in your price range.