Today’s Card of the Day celebrates The Hit Man, who was born on this date in 1950.  Mike Easler played for the Pittsburgh Pirates briefly during the 1977 season, which led to the card we are featuring below. He spent the 1978 season in the minors, but he was back in 1979 as a key bat off of the bench for the World Series winning Pirates. He stayed around through the 1983 season and he was a .302 hitter during his six seasons in Pittsburgh. On today’s Card of the Day, Easler is featured with three other outfielders, who were all 2-3 years younger than him. 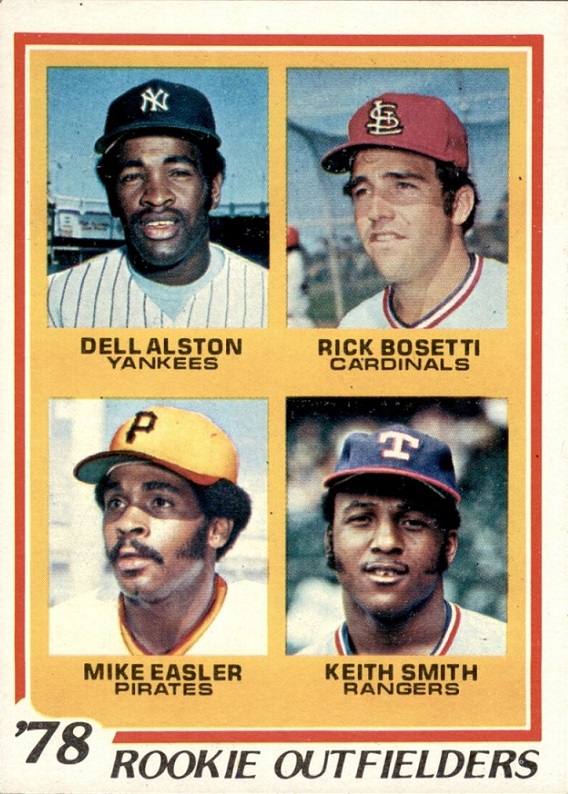 You might not be able to tell at first glance, but the Easler photo has some photoshop work done to it. He joined the Pirates at the end of Spring Training in 1977 and spent almost the entire year in the minors, so Topps was unable to get a photo of him with Pittsburgh. However, they had a photo already and did some coloring to put him in a Pirates uniform/cap.  The 1978 Topps set had rookie four-player cards for each position, with multiple cards for pitchers and outfielders. The other outfield card in the set featured Miguel Dilone of the Pirates. 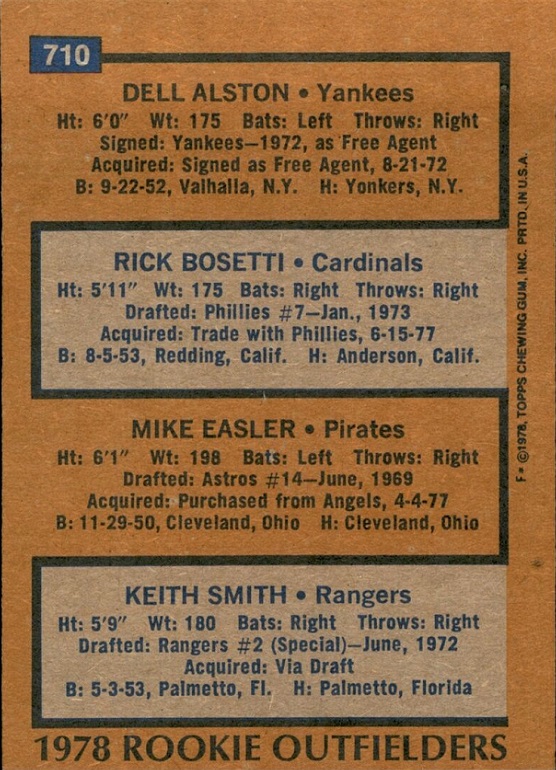 As you can see on the back, there is just enough room for a brief bio section on each player, so if you were a rookie card collector back then, you didn’t have much to go on with these players. However, you would probably be the least excited about Easler just based on the fact that he wasn’t a high draft pick and he was much older (in baseball years) than the other three players. A 27-year-old rookie, who was on his third team according to that bio, and he was drafted in the 14th round nine years earlier, probably didn’t have much of a big league future. It turns out that it was actually a little worse than first glance. The Pirates were his fourth team, since he was with the St Louis Cardinals in between the Houston Astros and California Angels. Easler ended up being the best of the group and it really wasn’t close. He hit .293 over 14 seasons in the majors and even had an All-Star nod in 1981.

As for the other three players, I’ll start at the top left. Dell Alston hit .325 in 22 games for the 1977 New York Yankees. That’s a good reason to have him on this card. However, it was downhill from there and he lasted in the majors until 1980, playing a total of 189 big league games, with a .238 average.

Through 1979, it looked like Rick Bosetti would carry this card. He was 25 years old and he played all 162 games for the Toronto Blue Jays that year. It wasn’t a great season (he had 3.1 WAR total over his first four years), but he was still fairly young and playing every day. However, from 1980-82, he played a total of 93 big league games, which ended up being his last 93 games in the majors. He was a .250 hitter in 445 games.

So not only was Easler the only player to live up to the rookie hype on this card, he played 464 more MLB games than the other three combined. They put up 14 seasons total and he played 14 seasons on his own.

If you want to add this card to your collection, it’s easy to find and cheap. You can find multiple examples on Ebay for $2-$3 each in nice shape, and it’s only a few bucks more for ones that would grade high. You can also find many examples autographed by Easler, which go in the $10-$15 range.