In today’s This Date in Pittsburgh Pirates History article, we mentioned that the Pirates traded third baseman Don Hoak to the Philadelphia Phillies on this date in 1962. I figured for today’s Card of the Day, we would look back at happier times for Hoak because that trade didn’t work out well for the Pirates. I went with the 1961 Topps card today because it was released just months after Hoak helped the Pirates to a win in the 1960 World Series. This is the first time that Hoak has been featured in the Card of the Day series, and it’s just the second card that we have looked at from the 1961 Topps set. 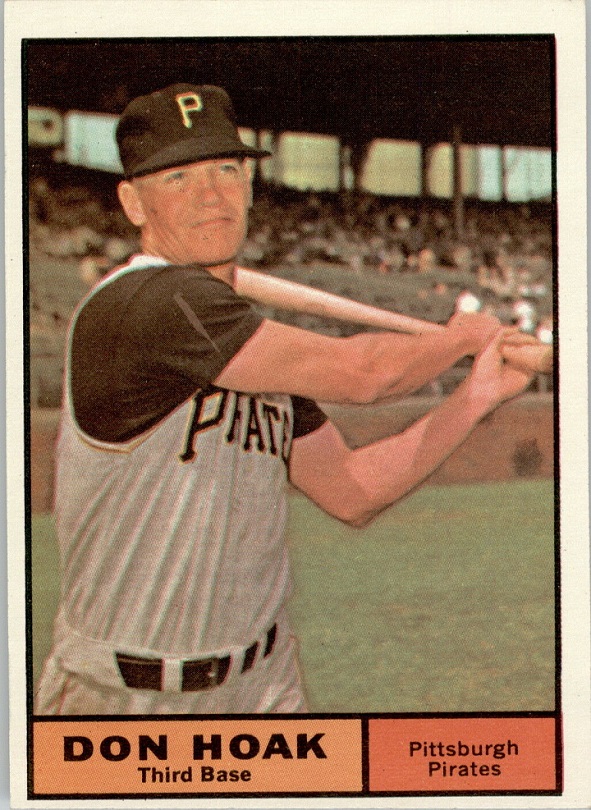 One thing interesting to note here is that this card looks strikingly similar to one of the two photos on the front of his 1960 Topps card. It’s not the same exact photo, but it was close enough that I looked at them side-by-side a few times, studying them closely for the subtle differences. The 1960 Topps card is cropped different due to more of a square photo, since it has a horizontal layout. It shows from his left elbow up, but other than that, he’s just looking slightly more towards the camera on the 1960 card and you can read a little less of the Pirates name on front. If you take it one step farther, the second photo on the 1960 Topps (a smaller black & white photo) looks exactly like the pose on Hoak’s 1962 Topps card. There wasn’t a lot of imagination used with his photo selections.

The 1961 Topps set is a bit of a plain design. I’m a big fan of the two-photo 1960 Topps cards with their bright colors, but an even bigger fan of the wood grain 1962 Topps cards. The year in between has very little appeal to me as far as design, with a simple approach of two boxes on the front with the name/position on the left and team on the right. Nothing else, just plain white borders. The 1960 style Pirates uniforms add enough eye appeal to the cards to make up for the lack of intrigue with the front design. 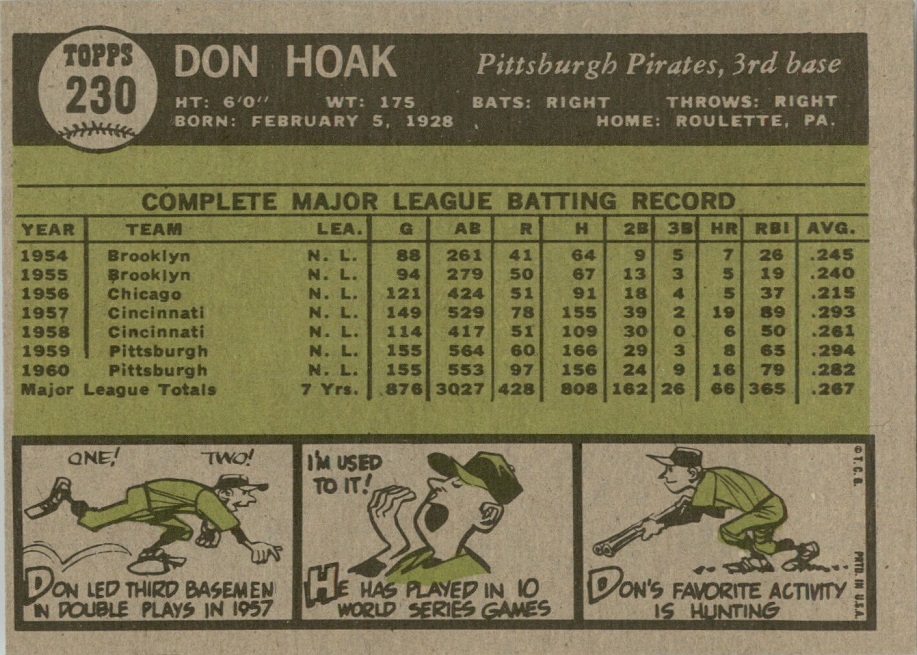 The back has bio info up top, full player stats in the middle (with nine categories for batters), then if the player isn’t a veteran with a long sheet of stats, there was a set of cartoons at the bottom. The cartoons  always featured a generic looking gray baseball player with a light green jersey, because those were the colors used on the back of the cards. The cartoons here show generic gray Hoak fielding at third base, being bored over playing in the World Series, and carrying a shotgun while wearing his baseball uniform. I probably would have went with his second place finish in the MVP voting in 1960, but that wasn’t for me to decide, especially since it was printed a very long time before I was born.

I assume you now want to add this card to your growing collection, so I’ll let you know that this is one that won’t hurt your pocket as the holiday shopping season is upon us. You can get one right now on Ebay for $3 delivered in presentable condition, with many seller options to choose from for under $5. As of this writing, there was a PSA 9 card, one nearly perfect in every way, for $165. I’ve never been into those ultra high grades, mostly because of examples like this one. You can get a PSA 8, which can in instances be nicer than a PSA 9 (it is humans grading them after all), for $46 delivered. That’s a big difference in price for such a minor difference in condition.