Today’s Card of the Day article is our first one for the 1970 Topps set, and the first one featuring Dave Giusti, who turn 81 years old today. He spent the 1970-76 seasons with the Pittsburgh Pirates. None of his Topps photos really stand out from the others, but all of the other sets that he’s in have been featured here at least once already, so I decided to use his first Pirates card.

The Pittsburgh Pirates acquired Giusti from the St Louis Cardinals on October 21, 1969, which means that his first card depicting him with the Pirates actually came out before he played for the team. Giusti is card #372 in the set, which makes him the final card in series three. Topps released their earlier cards in series, with a total of seven series and 720 cards in this particular set. 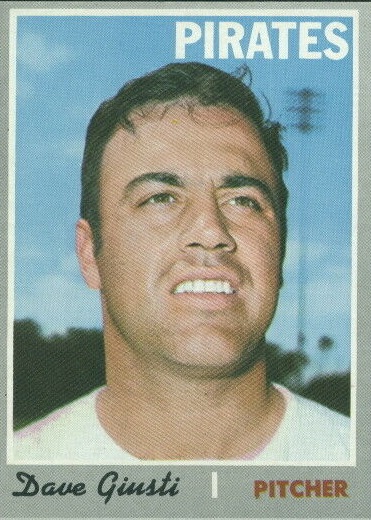 As I said, this card came out before Giusti even put on a Pirates uniform, so Topps had to pull a little bit of their sneaky magic. If they didn’t have a photo of the player with his current team, they usually had an option from older photos. In those cases, they would take a photo of the player without a hat and crop it close so it doesn’t show anything major on the jersey. In some instances, they would just airbrush colors onto the jersey. In some other cases, the color came off of the jersey. What you see here (or don’t see) with Giusti is no proof that he is actually wearing a different team’s jersey, so it passes as a Pirates photo. 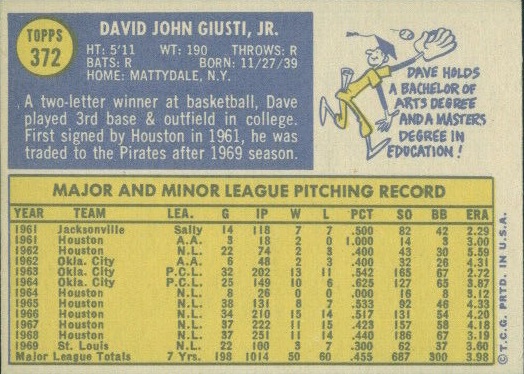 I’m a big fan of the back of the 1970 Topps cards because the stats are easy to read, which isn’t always the case with Topps cards. They included eight pitching categories on the back, which was well short of the later cards that expanded to include (for pitchers) hits, earned runs, shutouts, games started, complete games and saves, while dropping the winning percentage category. Since they limited the categories back in 1970, it allowed the print to be bigger, so combined with the dark letters/numbers on a light background, it made it even easier to read.

With Giusti, there was enough room to include all of his minor league stats, as well as his seven seasons in the majors. They also had room for a bio section and one of their cartoons. On veteran players, such as Willie Mays, who debuted in 1951, they didn’t have room for the bio or the cartoon. Giusti’s bio notes that he was a very good basketball player, he was a third baseman and an outfielder in college, and he was first signed by Houston in 1961. It also notes the trade to the Pirates after the 1969 season. The cartoon emphatically notes (!) his academic accomplishments in college.

If you’re interested in buying this card, it won’t set you back much. There are obviously much more popular choices for him, with his other cards showing him in some staged pitching pose, while actually wearing a Pirates uniform. The late series cards have added value in this set, but the third series has no extra price added. Autographed versions of this card will run you about $12-$15, which is the same price range as one graded PSA 7 (Near Mint). If you just want a common and decent shape is fine, you can get them for $2-$3 delivered, with multiple options available in that range.

As a side note, a perfect condition one, which is almost impossible to find, sold on Ebay for $460 back in August. One graded a PSA 9, just one grade lower and likely impossible to tell the difference without thoroughly scrutinizing the card, sold for $24 recently. Quite the difference.