Happy Thanksgiving everyone! Today’s Card of the Day was decided on the day we started this series. It couldn’t be anything other than a T207 Mike Donlin, who went by the nickname “Turkey” during his day because of the way he walked. He was only with the Pittsburgh Pirates for one year (1912) but it was perfect timing to get him into the T207 set and have him pictured in a uniform that they used for just one season. 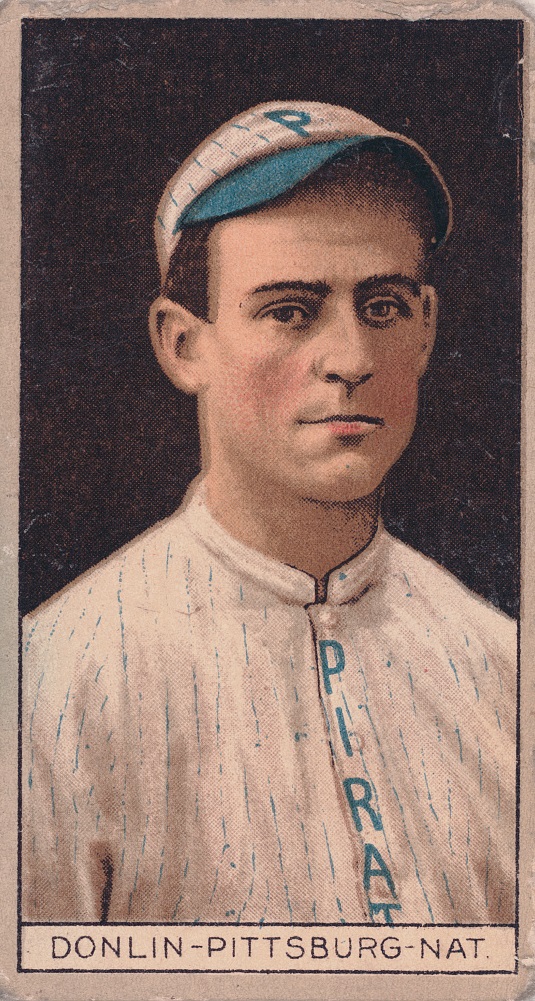 The 1912 Pirates had the word “Pirates” on their uniforms for the first time in franchise history. The team nickname has its origins in 1891, though the club didn’t fully embrace it until 1895, and it wasn’t an official name back then like it is now. The 1911 uniforms had a front pocket with a capital P on the pocket. It buttoned down halfway down the front (top to bottom of course). The jersey was light color (white/home, light gray/road) and the button part down the middle was blue. In 1913, the Pirates went to a jersey similar to the one shown above, except where you see PIRATES, it was solid blue. At the collar, it has a “P” on both sides of the top button. They kept that jersey style for two years, then in 1915, they returned to the 1911 look. The Pirates didn’t have the word “Pirates” on their uniform again until 1933.

The T207 set is also referred to as the Brown Background set. Some people really like the set, while other vintage collectors are turned off by the plain look. The set itself also has a bunch of obscure players and it’s missing some major stars of the era such as Ty Cobb and Honus Wagner, so that too keeps it from being widely collected. I personally have about ten cards from the set and like some of the poses offered, though it’s not one of my favorite sets from the era. I also enjoy the back of the cards… 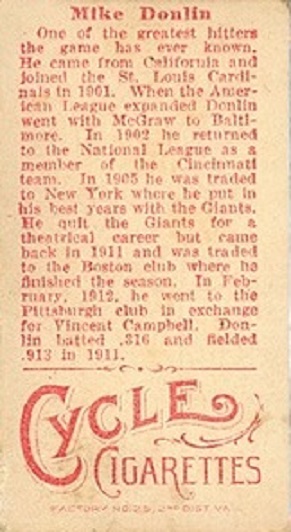 I had trouble finding a large/clear scan, so this will have to do. Donlin has three different back options, including a red color one showing an ad at the bottom for Cycle cigarettes. Another shows Broadleaf cigarettes, while a third one has no ad and is referred to as an Anonymous back. The last two backs have a darker print, but all three have the same bio section.

If you’re reading that back and seeing it says “one of the greatest hitters the game has ever known”, just know that it’s true. Donlin was not loyal to baseball. He went where the money was, and if he could get more money as an actor, then that’s what he did. If he stuck with baseball, he would be in the Hall of Fame. He was a .333 career hitter in 1,049 games, while missing full seasons at a time. His career ran from 1899 to 1906, 1908, 1911-12 and 1914. If he played that whole time, there is no doubt that he would be in Cooperstown right now.

If you’re interested in getting a T207 Donlin, I wouldn’t be concerned about which back you get, though the Cycle is the best looking, and the Broadleaf is much nicer than the Anonymous offering. I say all that just to tell you that the card is very pricey because it is a rare card from the set. While a common card  in a PSA 4 grade from the set will run you about $75-$100, a Donlin will go for $1,500+ in that grade. They have made reprints of the set and while they are easy to tell apart from the originals, they do look somewhat similar. That might be a better route, unless you’re serious about the set.