Today’s Card of the Day features a player who spent a short time with the Pittsburgh Pirates, but he made a huge mark on the baseball world. Luis Tiant played for the Pirates during the 1981 season. He made nine starts after the players returned from the mid-season strike. He made 21 starts in Triple-A before and during the strike. That was his only season in Pittsburgh. He signed in late February and he was released in early October, so his total time with the team was brief. That resulted in him having just one card with the Pirates (he has a Triple-A card as well). In a previous article, we noted a photobomb by Tiant on Mike Easler’s 1982 Fleer card, but this is the only solo big league card picturing Tiant with the Pirates. 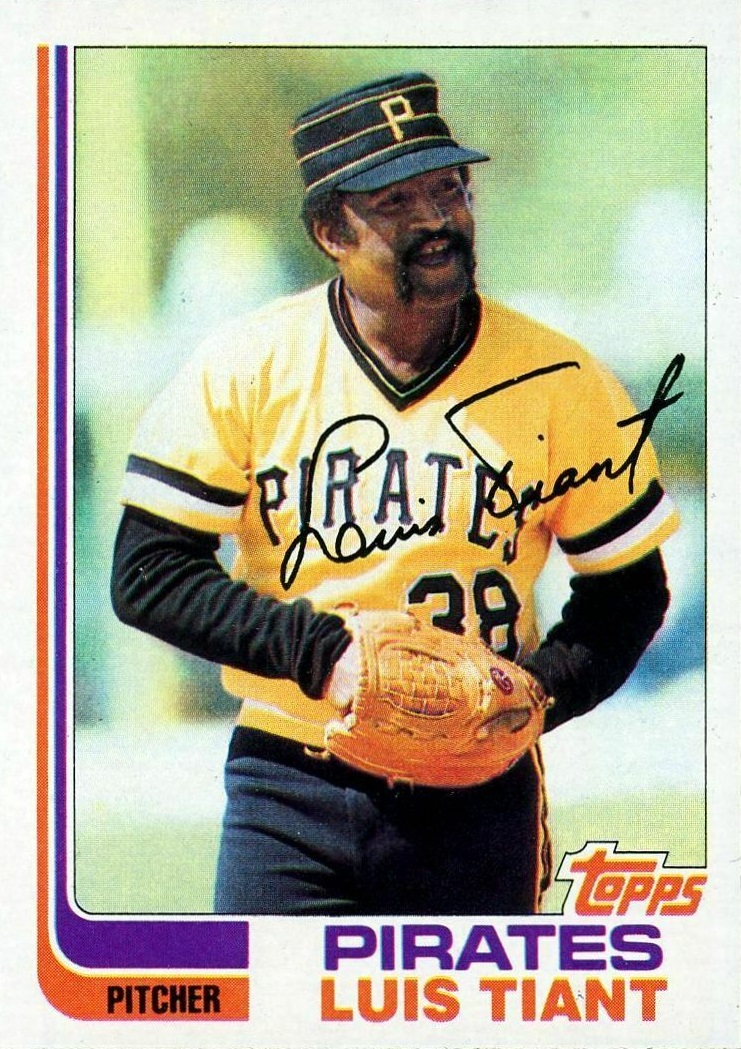 Tiant is pictured here in one of those great mix-and-match uniforms of the era. This combo happens to be my favorite one that they used. Black pants, gold top, black pillbox hat. It was an early Spring Training photo, so he’s also sporting a black long sleeve shirt underneath. Many of the Pirates photos in the 1982 Topps set have guys in jackets, so it must have been a cold day (for Florida) when they took the team photos.

All of the Pirates cards in the set have the purple/orange color combo on the front, with the team name in purple and players’ names in orange. Different teams in the set have different colors. The only Pirates cards that don’t play by those rules are the Future Stars card featuring Johnny Ray, the Dave Parker All-Star card,  and the In Action cards for Dave Parker and Willie Stargell. 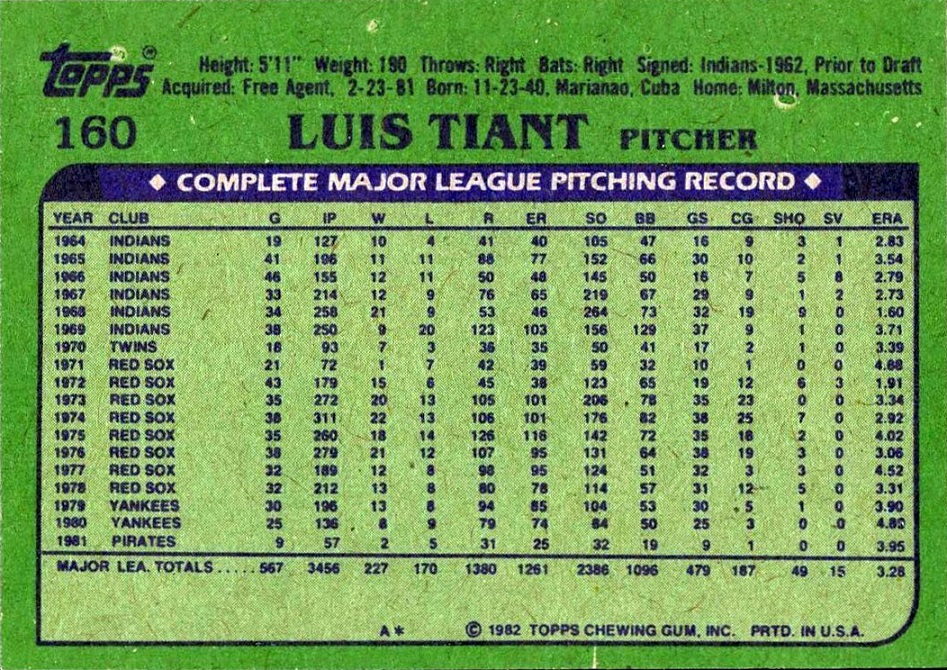 The back has Tiant’s complete stats up to that point, with his career dating back to 1964. He had such an interesting career, with that down point in the middle when he won just one game in 1971. He had 21 wins in 1968 and it looked like he bottomed out at 30 years old, but then he came back to put up three more 20+ win seasons. This isn’t quite his entire set of career stats. He finished his big league time with the 1982 California Angels. Tiant played so long as this point that Topps didn’t have room for any minor league stats or one of their player facts at the bottom.

Tiant certainly deserves Hall of Fame attention. He seemed to be headed to Cooperstown after picking up 30.9% of the votes during his first year on the ballot. Players who start that high usually eventually make it. His voting total never reached 20% in the 14 ballots that followed. He’s been on three veteran committee ballots since and failed to reach the required votes each time. He ranks 43rd in WAR for pitchers all-time, putting him ahead of many all-time greats.

The 1982 Topps set was produced in large quantities so this is a very affordable card. You can pick it up for $2 each and that includes shipping. There are also a handful of autographed copies available (autographed after the card was distributed) and they run about $15 each. A perfect condition card graded PSA 10 recently sold for $24.99 plus shipping, so even the best example out there won’t break the bank for anyone.