On July 17, 1944, the Pittsburgh Pirates were in Hornell, New York to take on the local team. The Hornell Maples played in the Pennsylvania-Ontario-New York League, better known as the PONY League. They were considered to be a Class D team, affiliated with the Pirates. At that time, Class D would be the equivalent of short-season ball today, with the average age of the players being 19 years old on that particular team. The 1944 Hornell Maples didn’t produce a single future Major League player, but they did get a chance to play the Pittsburgh Pirates right in the middle of the regular season.

The Pirates played a Sunday doubleheader against the Chicago Cubs in which a total of two runs were scored. Those games were at Wrigley Field. The Pirates then traveled to Hornell on their Monday off-day for an exhibition game, before heading to the Polo Grounds for a contest against the New York Giants on Tuesday. By car now, that trip would be about five hours, though the Pirates made that particular trip by train. They left Hornell after midnight, while the Tuesday game in New York was at night. The trip got a little more interesting the next day, as they went right to Philadelphia. That means that the Pirates played five games in four different towns over four days. What’s even better, the Pirates were in second place at the time.

The Pirates used a total of 20 players in this game, with the big name being Hall of Famer Lloyd Waner in center field. This was one month after he rejoined the Pirates, signing as a free agent after being released by the Brooklyn Dodgers. Waner played 42 games for the Pirates over the 1944-45 seasons without getting a single start. The Pirates also used Al Lopez, the Hall of Fame manager, who had a nice career as a player as well. The other big names would be Rip Sewell and Vince DiMaggio, who both played later in the contest. Sewell won 21 games in 1943 and would repeat that feat in 1944. The most familiar name not playing was Bob Elliott, who had to meet with draft board doctors and was away from the Pirates for three days. There was also one name in the lineup that would be unfamiliar to most.

The second left fielder used by the Pirates in this game was Jake Flowers. Even the best of you Pittsburgh Pirates historians are probably drawing a blank. If I’m being honest, I would have been too about a few weeks ago before his name came up in research, though I knew him from collecting old cards. I just didn’t know of his association with the Pirates until recently. He was a coach for the team during the war years, joining the Pirates four years after he played his final minor league game. That was also eight years after he played his final big league game. In this particular game in 1944, he was 42 years old and 12 years removed from his final MLB game. He was a solid role player over ten seasons in the majors, hitting .256 in 583 games, with a career 2.3 WAR.

As mentioned, the average age on Hornell’s roster was 19 years old, but the middle infield really brought down that average. Shortstop Harry Repanske and second baseman Cyril Shade were both said to be 16 years old at the time. Combined, they were ten years younger than Jake Flowers.

There’s no play-by-play available for this game, but there was one good reason to write up this recap. The 1,800 fans saw the Pirates beat up on the team referred to as the “Baby Bucs”, winning 20-5. The Pirates had 22 hits in the game, including the sole reason I decided to do more research into the contest (I had a lot of free time). Jake Flowers went 1-for-5 in the game with a home run. His last homer with a Major League club came 13 years earlier. Frankie Gustine also hit a home run.

Johnny Barrett started in center field, went 2-for-2, then left for the veteran Lloyd Waner to get some playing time. Waner had a 1-for-3 game. The Pirates got three hits from outfielder Frank Colman, while Babe Dahlgren, Al Rubeling and Gustine each had two hits. Al Lopez didn’t get an at-bat, while Vince DiMaggio was used as a pinch-hitter. He reached on a walk, stole a base and scored a run. The Pirates drew a total of 12 walks and 14 different players scored at least one run.

On the pitching side, Ray Starr got the win with one run over four innings. Rip Sewell followed and showed off his famous eephus pitch to the local folks. Xavier Resigno took a turn on the mound as well, before Joe Vitelli gave up four runs in the bottom of the ninth. Vitelli was 36 years old, with three Major League pitching appearances to his credit at the time. He was a former minor league pitcher, who was hired by the Pirates as a batting practice pitcher and then forced into action when injuries left them short-handed. He pitched four times in relief in the majors, all in one-sided losses.

Here’s a clipping of the boxscore 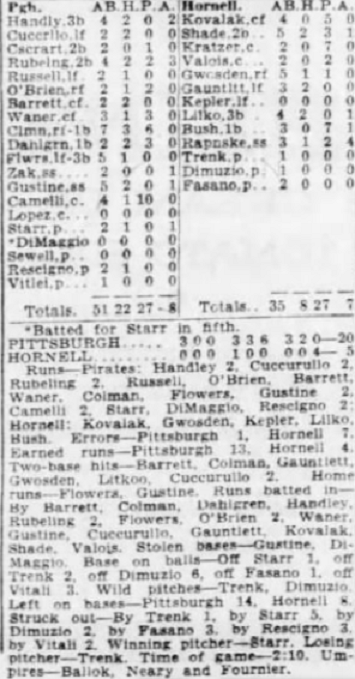