On August 5, 1905, a record-breaking crowd at Exposition Park saw the Pittsburgh Pirates win a game in which they scored five runs and the New York Giants also scored five runs. The game had plenty of excitement, but nothing close to what happened in the bottom of the ninth inning.

It was a Saturday afternoon in Allegheny City (current day Pittsburgh). The 60-35 second place Pirates were hosting the 69-27 first place Giants. The Giants won the first game of the four-game series, while the Pirates won games two and three. The fourth game saw the great Christy Mathewson take the mound versus Charlie Case, who isn’t well known now, but he had a nice run with the Pirates at this time. Case had a 2.59 ERA in 216 innings in 1905.

The Pirates had Hall of Famers Fred Clarke batting second and Honus Wagner batting in the cleanup spot. The Giants didn’t have any future Hall of Famers (yet), but Bill Dahlen is one of the best shortstops ever and center fielder Mike Donlin was an outstanding hitter who cost himself a chance at the Hall of Fame because he would leave baseball for more lucrative offerings. On paper, knowing what we know today, the Pirates had the hitting advantage, while the Giants had the pitching advantage, but overall they matched up very well.

The game started at 3:00 PM with 18,383 fans in attendance. It was said that the park was already overflowing onto the field by 2:00 PM and ticket sales were stopped prior to the game, so an even bigger crowd would have been in attendance in the park could have handled it.

The Pirates got the scoring started right away in this game. Lead-off hitter Otis Clymer laid down a bunt base hit. Fred Clarke followed with a single to center field that put runners on the corners. Tommy Leach then hit a ball into right field that went into the overflow crowd (see below), which resulted in a ground rule double and a 1-0 lead. Honus Wagner followed with a sacrifice fly to make it 2-0. Del Howard then grounded out. Leach moved to third base on Wagner’s sac fly, then scored on the Howard ground out, giving the Pirates a 3-0 lead after one inning.

The Pittsburgh Press attempted to show a photo of the crowd, but it did not come out well. While it’s not a great photo, you can still see the crowd in the actual outfield and down the lines in foul territory. There were ropes set up around the field to keep the crowds from moving around. 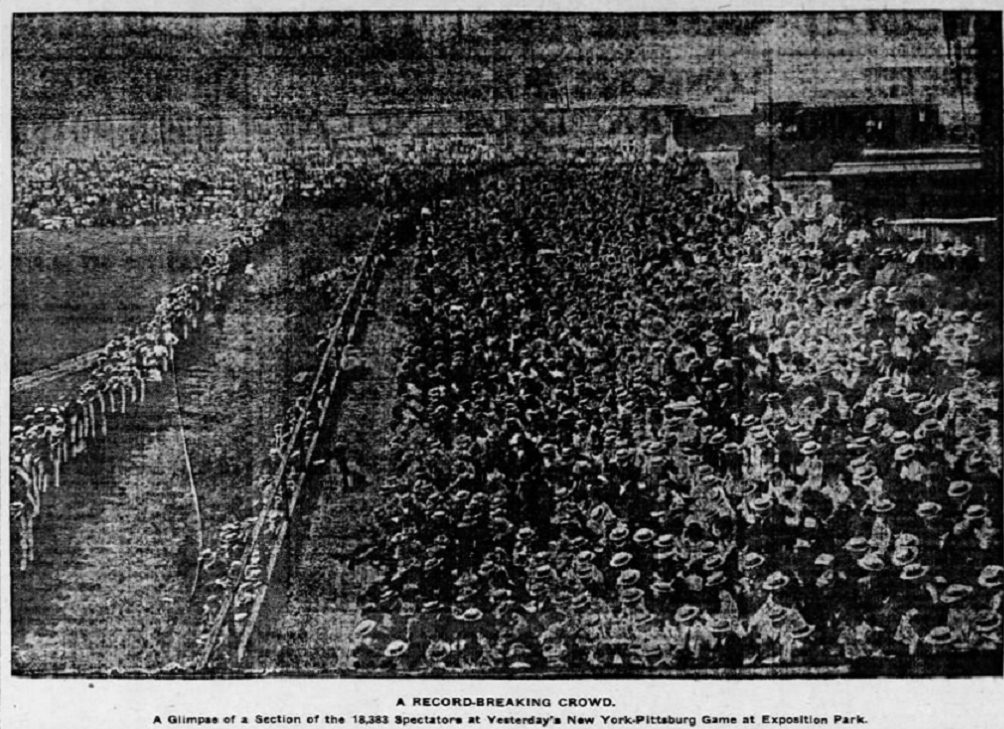 In the top of the second inning, the Pirates lost veteran catcher Heinie Peitz to an injury when Bill Dahlen was hit by a pitch and the ball caromed off of him, hitting Peitz in the hand, causing a large cut. Peitz actually finished the inning behind the plate, but couldn’t hit in the bottom of the second and left for rookie catcher George Gibson, who had just nine game of MLB experience prior to this game. Gibson would go on to catch over 1,000 games for the Pirates.

In the bottom of the second, Claude Ritchey singled and moved to second on a wild pitch by Mathewson. Gibson walked, then Charlie Case moved the runners up with a sacrifice bunt. The next play was a strange one. Otis Clymer grounded out to second base and the throw came home to cut down Ritchey. With the throw going home and another runner headed towards third, Clymer tried to sneak into second base and the throw from the catcher went into center field, allowing Gibson to score the Pirates fourth run.

The score remained the same until the top of the sixth inning. Case gave up a lead-off single to Frank Bowerman, then he hit Christy Mathewson with a pitch. A ground out by George Browne moved the lead runner to third base, then Bowerman scored on a sacrifice fly by Mike Donlin. The Giants ran into the final out when Browne tried to go to second base on Donlin’s fly, but Wagner cut off the throw from Clarke and pegged out Browne. Your typical 7-6-4 double play.

The Pirates got that run back in the bottom of the sixth. Del Howard singled, moved to second base on a sacrifice by Dave Brain, then he scored on a ground rule double to center field by Claude Ritchey.

The four-run lead didn’t last long. A bad hop single allowed the first batter to reach in the top of the seventh, and then it fell apart from there. Dave Brain muffed a grounder to third base, then Bill Dahlen made it 5-2 with a double. A single by Art Devlin scored two runs, then a walk, sacrifice bunt and sacrifice fly off of the bat of Christy Mathewson, made it a 5-5 game. That was the end of the scoring for the day, but far from the end of the game.

After the Giants went down in the ninth, Ritchey led off the bottom of the ninth with a double. George Gibson then hit a grounder back to Mathewson, who decided to try to get the out at third base. The runner was called safe and the Giants as a team erupted at the call. The home plate umpire (George Bausewine) made the call on the play, while the base umpire (Bob Emslie) turned his attention towards first base as soon as the ball was put in play. Manager John McGraw pleaded with Emslie to reverse the call, but he had his back to the play, and Bausewine was sure of what he saw.

Back in the day, it wasn’t odd to see teams argue with the umpire for extended times, so there was a rule in place that the team had to be ready to play within five minutes or the game would be called. The umpires would have a stopwatch and declare at some point that the team had five minutes to continue the game. Bausewine gave the Giants the warning and they refused to stop arguing, so he called the game a 9-0 forfeit win for the Pirates. Despite the score “change”, the stats still counted just the same, so any boxscore you see from the day shows a 5-5 score and win for the Pirates.

Once the game was called, the local fans celebrated by storming the field and the Giants needed a police escort to leave the park safely. It was reported that Art Devlin’s protest to Emslie got so heated and insulting that the umpire hauled off and slugged him with a powerful right hand. The umpire then calmly turned around and continued to walk off the field. Devlin was the one who was covering third base on the disputed play.

The winning pitcher in this game was Deacon Phillippe, who came on to handle the final two innings for the Pirates. Ritchey went 3-for-3 with a sacrifice, while Tommy Leach had two hits and a walk. Honus Wagner went 0-for-4, though he did pick up an RBI. Fred Clarke went 1-for-4 with a run scored. Even with the bickering at the end, the game took just 1:50 to play.