Today’s Card of the Day comes from a player who is more famous for what he did outside of baseball. While he carved out a nice little baseball career from the 1883 until 1890, Billy Sunday became a well-known evangelist in the early 1900s. He left baseball early for his new calling and continued on giving sermons until his passing in 1935 at 72 years old. He spent three years playing for the Pittsburgh Alleghenys and he was one of the few players who didn’t leave the team over the 1889-90 off-season to jump to the newly-formed Player’s League. Sunday was born on this date in 1862. Here is his 1888 Old Judge baseball card.

Here’s the front (the back of the card is blank): 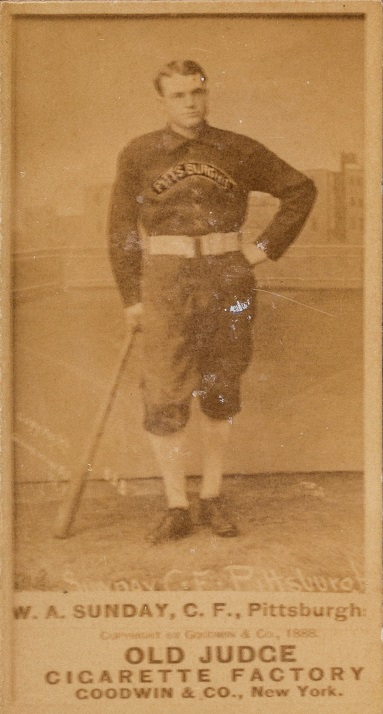 We have featured the Old Judge set here three times already and that’s because it’s the first large set of baseball cards ever produced. It also gives us a look at some players who otherwise have no known photos. It features over 500 players and 2,500 different poses. The set was first produced in 1886 and ran through early 1890. The Old Judge card makers would keep track of player’s movements and update the cards if they switched teams, so it’s not uncommon to see the same photo of a player have multiple teams listed. What rarely happened in the set was a player taking a second set of photos, so the Old Judge people had to do some early “photoshopping”.

This particular photo of Billy Sunday was taken in 1887 when he was a member of the Chicago White Stockings, which would be the current day Chicago Cubs. He was in a studio with a fake city backdrop placed behind him, leaning on his bat, hand on his hip. This card was first issued in 1887 and listed him with Chicago, but he was purchased by the Pittsburgh Alleghenys in January of 1888. When the Old Judge card manufacturers reissued their cards in 1888, Sunday was now listed with the Pittsburgh. If you look at his jersey, you will see the old school photoshop at work. They not only carved “Pittsburghs” into the glass plate negative, but they also put it across his uniform.

I personally love the old photo shop attempts in this set, even though there is nothing correct about them. Here’s an example of an 1888 Pittsburgh uniform, showing pitcher Hardie Henderson in his only season with the team: 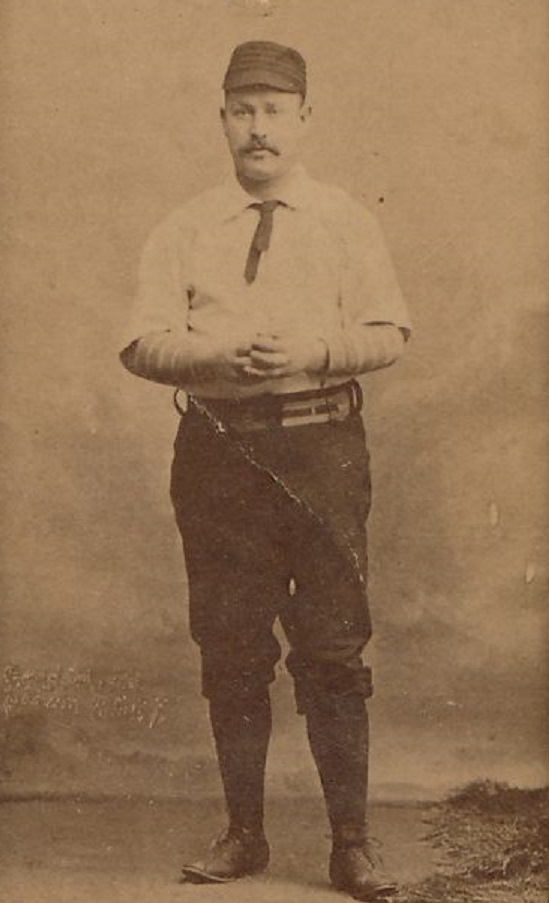 Clearly there was no attempt made to recreate this uniform, or the all white Pittsburgh uniform from 1887. Neither had “Pittsburghs” on the front and neither had dark uniform tops. The one in the photo of Sunday was a dark blue color, which obviously doesn’t show up in a sepia photo. However, that Sunday photo originally had “Chicago” written across the front, so the “Pittsburghs” patch is actually a cover up.

I highly recommend getting an Old Judge card to anyone in collecting, even if you just go with the lowest grade common you can find. Sunday is not a common because people outside of baseball also have an interest in acquiring one of his cards. The most readily available cards for him are the ones in the Old Judge set, although this particular card shown above likely has no more than 25-30 examples in existence. A Sunday card that isn’t trimmed or rebacked, which happened to a lot of Old Judge cards, will run you over $200 in low grade. If it’s high grade, the price goes into four figures. About a year ago, one that was graded a 6 (on a 1-10 scale) sold for $2,277