Today’s Card of the Day celebrates a Pittsburgh Pirates player born on this date in 1928, who was part of a three-generation family in baseball. Gus Bell was about to start his third and final season in Pittsburgh when Topps released their first large set in 1952. The 407-card 1952 Topps set is an iconic set in the card collecting community, with the Mickey Mantle card fetching huge prices in high grade. Even a stack of common cards could be worth a small fortune depending on the condition. Card #170 in that set is our Card of the Day today and it features outfielder Gus Bell.

There aren’t but a handful of three-generation families in Major League baseball. The Boones, the Hairstons, the Colemans and the Bells. Gus Bell in the grandfather in his group. He played for the 1950-52 Pirates as part of a 15-year career in the majors. His son, Buddy Bell, played third base for 18 years in the majors and put up Hall of Fame caliber numbers without anyone really noticing. His 66.3 WAR is 132nd all-time, one spot ahead of Goose Goslin, who also played 18 seasons and no one has ever questions his inclusion in the Hall of Fame. The next ten spots below Goslin includes seven Hall of Famers. The third generation of Bells are both sons of Buddy. David Bell put in 12 years at the big league level, while his brother Mike Bell played for the 2000 Cincinnati Reds. Gus, Buddy and Mike all played for the Reds. 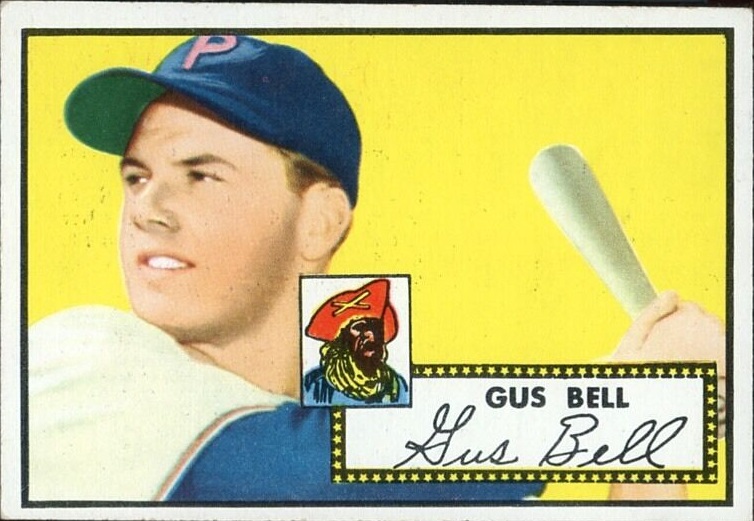 This card has a closeup batting pose with a solid yellow background. Many cards in the set had a solid background, with varying color choices. Some cards had an actual scene in the background, which includes trees and/or outfield fences in many cases. As I always mention here, I love when they use the old Pirates logos on the cards. This one isn’t a particular favorite among the many logos used over the years, but it’s still great to see. I’m not sure why the “P” on the hat is pink, but it’s something that Topps did on a few Pirates cards, while others were light yellow in color. 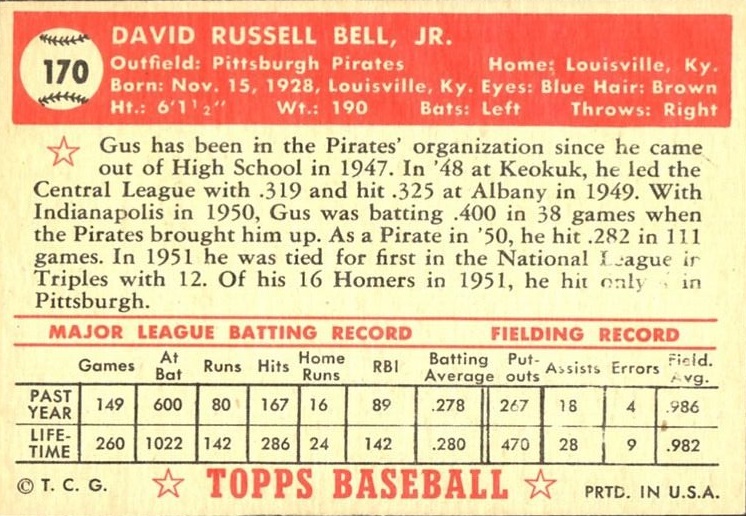 The back of this card comes with two different variations. This one is considered to be the white back, with the name coming from the background color. There is also a gray back version, which should be self-explanatory. The gray backs are much tougher to find and demand a premium.

The back has his brief lifetime stats to that point, with two seasons in Pittsburgh. They also included defensive stats back then, which was much more common on earlier cards. The 1951 campaign was his best one for the Pirates, but far from the best one of his career. That happened while he was in Cincinnati. The bio section has a nice rundown of how the 23-year-old outfielder got to this point in 1952. I’ll note that this card has a small bit of paper loss at the bottom of the bio section, so in case you were wondering, he hit four home runs at home in 1951. At the top you might notice something that you don’t see (at least written down) on any other cards. It lists the eyes and hair color.

If you want to add this card to your collection, it will run you about $10-$15 in low grade, ungraded. That would be one with the white back. As I mentioned above, the gray backs demand a premium. There are no recent sales on Ebay of a gray back Bell, but other commons from the set in PSA 2 condition, which is quite literally a “2” on a scale of 1-10, can sell for over $400. As for the white back in high grade, the prices reach triple digits when the grade gets up to PSA 7 (Near-Mint condition).