On this date in 1996, the Pittsburgh Pirates made a nine-player trade with the Toronto Blue Jays. The biggest names were going to Toronto in the deal, but the Pirates were getting six players in return. The biggest name going to Pittsburgh was pitcher Jose Silva, mostly because he was the only one with big league experience at the time. That makes him a great choice for today’s Card of the Day, but I wasn’t set on him being the choice. I was open to anyone in the trade. That was until I looked through his cards and found the gem you’ll soon see below. You’ll quickly know why I decided today’s Card of the Day needed to be the 1999 Fleer Tradition Jose Silva. 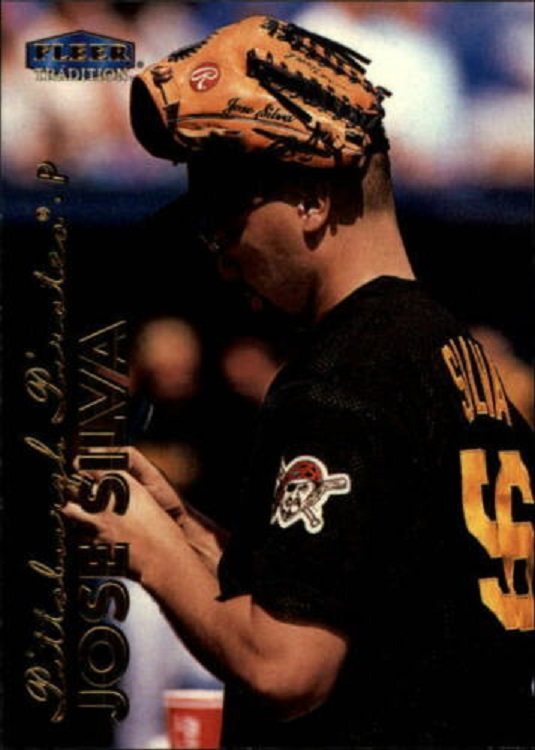 Let me first say that I had some trouble finding a quality photo to use. This scan is a little dark compared to the card’s actual look. Some were too light, scanned too small, and some of the better ones had autographs on front. That being said, it’s not hard to tell why I chose this card. This isn’t even a great photo of Silva, a standing shot from the side is about as boring as you can get for the photo. You don’t see the player’ face, not a great shot of the uniform (and who doesn’t love the 1998 uniforms?) and action shots are significantly better than anything else, while the posed “action” shots are an acceptable alternative.

The card has “Pittsburgh Pirates” written out in cursive, which is a nice touch, though I’m not a huge fan of how they chose to display the player/team names in this set, but after a while, you have to find new ways to make cards look different from everything else. Sometimes they hit, sometimes they miss. Oh yeah, he’s wearing a glove on his head and surprisingly, he’s not the only player in the set wearing a glove hat. I didn’t look through the whole set, but I did see a Jose Lima card that had the similar look, side photo/ glove hat, busy doing something other than posing for a card. 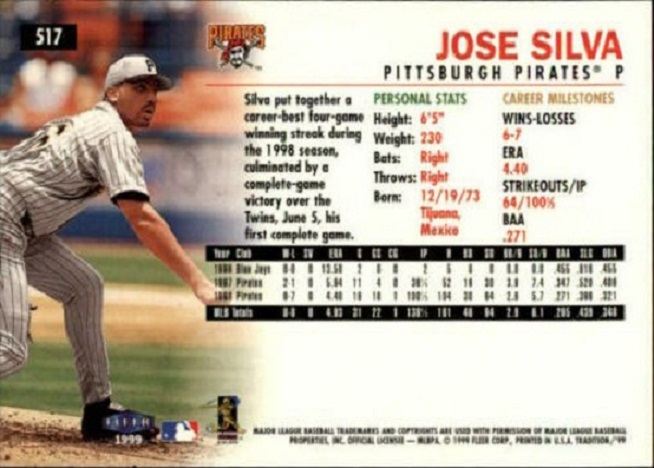 The back offered a second photo of Silva and it’s obviously much better once you get past the regular hat. I was not a big fan of those uniforms, gray with pinstripes, but I was a huge fan of the hats that went with the uniform. I even have one on a little hat display my father built, alongside a few other classic hats from the Pirates.

There’s a little bio on the back, along with a category called career milestones, which doesn’t really show any milestones. I’ve never heard a “this date” article that noted when a player reached a 6-7 win/loss record during their career.

As I mentioned, it was tough finding great scans here, so I couldn’t make this one bigger and still having the numbers legible. That being said, the numbers here are unnecessarily small. Look at all of the room left blank under the numbers?

By the way, I realize I’m being tough on this set’s design and setup, but the photo quality was a nice selling point back then and  I always like the second photo on the back

This is a common card from a set that isn’t that popular now,. The same could be said about most sets from that late-90s era. If you want to add glove hat Silva to your collection, you can get it for about $2 and that includes shipping. For about $5 more, you can get the Pirates team set, with 17 cards, including Jason Kendall, Brian Giles, Jose Guillen and 13 other players named etc.