Today’s Card of the Day features relief pitcher Gene Garber, who began his Major League career with the Pittsburgh Pirates in 1969. It comes from a 35-card subset included in the 1983 Topps set called Super Veterans. The subset pictures two other players with the Pirates, Al Oliver and Kent Tekulve, who is the only one on the Pirates in both photos.

Garber didn’t make his mark with the Pirates. His time in Pittsburgh was rather short in big league experience (33.2 innings over three seasons), though he was a member of their system from 1965 until 1972. His biggest contribution to the Pirates was as a trade piece used to bring in pitcher Jim Rooker. Garber played another 16 years after the deal, throwing a total of 931 games in the majors. 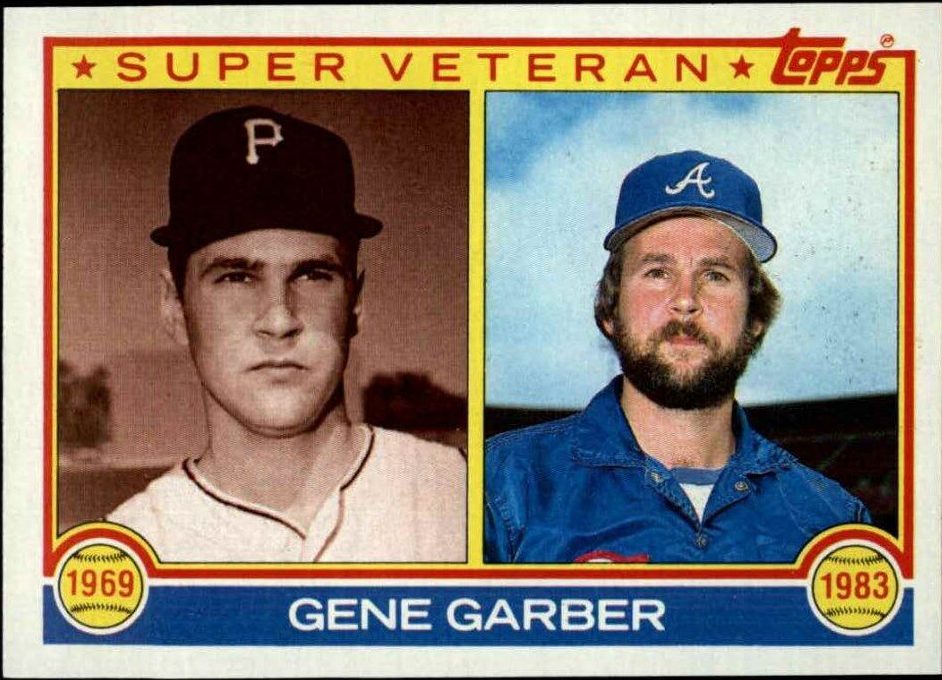 The front of the card shows a young Garber with the Pittsburgh Pirates on the left and a 35-year-old veteran on the right with the Atlanta Braves. The 1983 Topps set was put out well before the season started, so at this point in his career, he still had another six full seasons left before he retired. 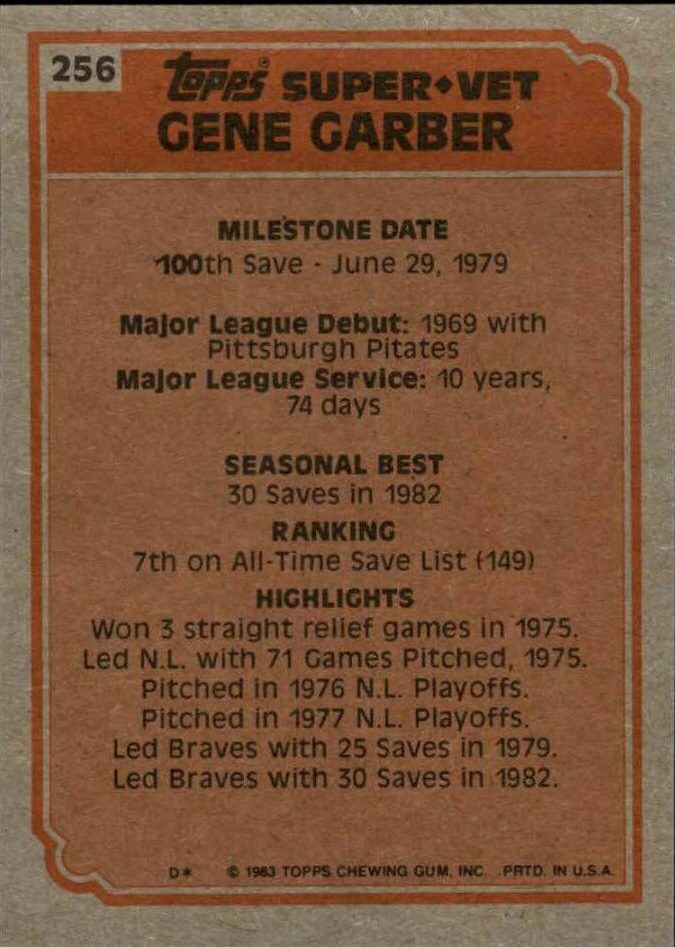 The back includes a rundown of his numbers as a reliever. His milestone date for his 100th save might not sound like much now, but once you go down to the ranking category, you see that his 149 saves at the time ranked him seventh on the all-time list. Garber finished with 218 saves in his career, which right now ranks him 44th all-time. This card shows a good story about how the save stat has changed over time. He added to his career total for another six seasons and dropped back 37 spots on the all-time list since 1983. The backs of each card also list the service time for the players. Garber broke the ten-year mark in 1982, which is a big accomplishment and it pays off in the future, with the maximum pension payout for those players who last at least ten years.

Garber’s career highlights don’t really stand out that much, such as pitching in the playoffs. Even back then, 40-50 pitchers per year would see playoff action. The odd part might be that they didn’t mention that he was in the playoffs in 1982. Garber had a rough time in limited playoff work over the years, giving up eight runs over 9.1 innings.

Leading the NL in games pitched is an accomplishment, but the final two highlights just seem like space filler. The team closer is going to lead the team in saves because there’s no one else doing his job regularly. That doesn’t mean a whole lot when he has no competition for the spot. In fact, his 1979 season was one of his worst, with a 6-16 record and a 4.33 ERA. It’s tough to lose 16 games as a reliever, but he still saved 25 games that year. However, his 1982 season was one of his best, with a 2.34 ERA in 119.1 innings and a seventh place finish in the NL Cy Young voting. That voting total is more impressive than anything listed there.

This card is a common from the set and it will cost you about $2 to add to your collection, with shipping usually taking up half of the price. You can also find seven different auctions (as of this writing) on Ebay selling this card autographed by Garber. Unlike some of the current player autographs, which look like they got their two-year-old sibling to ghost sign for them, Garber has an outstanding autograph.