Today’s Card of the Day comes from the 1976 Topps Traded set. After Topps released their regular set, they printed up a 44-card set of players who switched teams after the initial set was already in production. The cards were included in packs by April of 1976, with Topps doing of their famous airbrushing to get the players on their new teams. Please allow me to introduce card #583T of the 1976 Topps set featuring veteran second baseman Tommy Helms.

Topps first tried out a traded set in 1974. They skipped the idea in 1975, then returned for 1976. The next time that they released a traded set was in 1981 and it was sold as a box set, not in packs. That set was also much bigger and released later in the year to allow them to get photos of the players with their new teams. 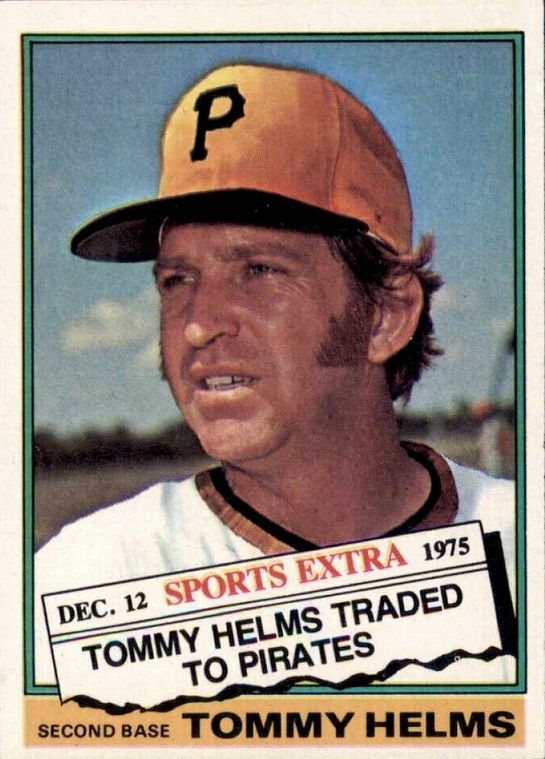 Topps obviously didn’t have a photo of Helms on the field in a Pirates uniform at the time so they had to improvise. You really don’t have to look closely to notice that the Pirates cap and the black/gold around the neck were airbrushed onto the card. I also have to mention the sideburns here, very 1975. These cards look very similar to the regular 1976 Topps card with the border and photo frame, but the torn newspaper headline pasted over the lower portion of the photo tells you that this card is part of the Traded set.

The Pirates acquired the 34-year-old Helms from the Houston Astros for 28-year-old infielder Art Howe. The traded worked out awful, with Howe putting up 13.7 WAR over the next seven seasons in Houston, while Helms was a bench player for just over one full season, finishing his time in Pittsburgh with 0.1 WAR. He was released in June of 1977 with making a single start during his second season with the team. Helms was a solid player in his prime, winning the Rookie of the Year award, followed by two All-Star seasons, then another two seasons in which he took home the Gold Glove award.

The back of these cards were set up like a newspaper announcing the deals. The date and location are at the top of the Sports Extra (not a real newspaper apparently). As mentioned, this trade didn’t work out for the Pirates, but Helms was there for his veteraness (not a real word) to add infield depth. While he didn’t play in the field much with the Pirates, his biggest playing time on defense came at third base. He played shortstop as well, though it was exactly one inning and he didn’t record any chances. Topps also briefly covers his achievements in baseball, leaving out the Gold Glove awards

If you want to add one of these beauties to your collection you can find it for $2-$3 delivered on Ebay. Even though these cards were released later in the year, Topps mass produced them, so they aren’t hard to find. Ebay also has a handful of autographed copies as well as two examples that are graded PSA 9, one for $23 and the other for $31 (though it has a best offer option). One recently sold for about $33 so the lower priced one seems like a bargain if you’re into graded card.