During the 1958 season, George “Red” Witt had an outstanding year for the Pittsburgh Pirates. He finished with a 1.61 ERA in 106 innings, while being limited in his work due to an inflamed elbow. In fact, coming into today’s featured game, he made his last start ten days earlier and left after only three innings. Witt had some impressive outings in 1958, including back-to-back complete game shutouts in early August, but September 5th might have been his best game of the season.

The Pirates were hosting the Milwaukee Braves in front of 30,3019 fans at Forbes Field on Friday, September 5th. The Pirates had a 72-63 record, second only to the Braves with their 80-54 record. Milwaukee had three Hall of Famers in their lineup, with veteran second baseman Red Schoendienst batting lead-off, followed by third baseman Eddie Mathews in the third spot and right fielder Hank Aaron batting cleanup. Their pitcher that day was Carl Willey, a 27-year-old rookie with a 9-4, 2.48 record, who shut out the Pirates just five days earlier.

The Pirates had their own pair of Hall of Famers in the lineup, with Roberto Clemente batting second and Bill Mazeroski batting sixth. They also had familiar star names such as Bill Virdon, Dick Groat, Ted Kluszewski, Bob Skinner and Frank Thomas. This match-up saw two pitchers who were having strong seasons versus two lineups with name power.

The first inning saw Eddie Mathews draw a walk and Ted Kluszewski reach with a single. Both got on base with two outs and neither made it past first base.

The second inning was very similar to the first. Both pitchers recorded two outs before allowing a base runner. In this instance, it was Witt giving up a single to Del Crandall, then getting a liner to first base for the final out. Willey allowed a double to Dick Groat, then intentionally walked catcher Bill Hall, so he could face Witt. Willey won the pitcher vs pitcher battle, striking out his mound opponent.

In the third, the Braves got a runner on with only one out, as Red Shoendienst picked up a single. He moved to second on a ground out, then stayed there as Witt got Eddie Mathews to fly out to Clemente in right field to end the inning. The similar innings continued for the two teams in the bottom of the third, as another Hall of Famer (Clemente) picked up a one out single. However, he was unable to get to second base. Willey got Ted Kluszewski and Bob Skinner to both fly out to Aaron in right field, keeping the game scoreless.

After Witt retired the side in order in the top of the fourth, a first for either team in this game, the Pirates got a two-out double from Dick Groat. That’s exactly what happened in the second inning, but the Braves decided to pitch to catcher Bill Hall this time and he was retired on a grounder back to the pitcher.

Both teams got one runner on base in the fifth inning. Bill Bruton recorded a one-out single, then stole second base with Willey up. Witt struck out his mound foe, then got out of the inning with a fly ball to right field by Red Schoendienst. The Pirates got a two-out walk from Clemente, then Kluszewski grounded out to second base to keep the game 0-0 heading to the sixth.

Witt had a quick sixth inning against the 2-4 hitters in the Milwaukee lineup, retiring them in order. The Pirates threatened in the bottom of the inning. After a fly out to center field by Bob Skinner, Frank Thomas singled to center field and moved to second base on an error. Bill Mazeroski walked, but Dick Groat couldn’t come up with his third hit. Instead, he grounded into a 4-6-3 double play to end the inning.

The Braves had their big chance to score in the seventh, but they wasted two opportunities. A lead-off single by Wes Covington was quickly erased on a double play. Del Crandall walked with two outs, stole second, and then eighth place hitter Bill Bruton was walked to bring up Willey. In current day baseball, the pitcher would likely leave at this point, but this was 1958 and Willey had 15 straight shutout innings against the Pirates, so he stayed in to bat and Witt was able to strike him out. The Pirates went down quickly and quietly in the bottom of the seventh.

The top of the Braves order was set down in order in the eighth, while the Pirates showed some signs of offense to try to help their pitcher to victory. Clemente singled, then moved to second base of a sacrifice by Kluszewski. Bob Skinner was intentionally walked, which worked out for Willey. He got Frank Thomas out on a fly ball, then Bill Mazeroski grounded out to third base to end the inning.

Both pitchers took the game to the ninth with a shutout in tact. Witt set down the first two batters before Frank Torre doubled. The Braves went to a pinch-runner, but a ground out to Groat ended the inning and gave the Bucs a chance for a walk-off. With one out in the bottom of the ninth, the Pirates sent up slugging first baseman Dick Stuart. The 25-year-old rookie came up with the Pirates in early July and already had 14 homers. His 15th would have to wait for another day. He popped out to shortstop for the second out. Witt batted for himself and struck out, sending the game into extra innings with both starting pitchers still on the mound.

Witt walked the lead-off batter in the tenth, who was then moved to second on a sacrifice bunt by Willey. Witt got Schoendienst to line out to first base, then Johnny Logan was retired on a fly ball to left field. In the bottom of the tenth, Bill Virdon swung at the first pitch of the half inning and sent the ball into the right field seats for his ninth home run of the season. The crowd went into a frenzy as Virdon walked it off, handing Carl Willey a tough 1-0 loss. Witt went ten scoreless innings, holding the Hall of Fame trio of Schoendienst, Aaron and Mathews to one single in 12 at-bats. The 10-inning contest wrapped up in two hours and 53 minutes.

The local paper printed this photo of the two heroes from the day, Virdon and Witt relaxing after the game 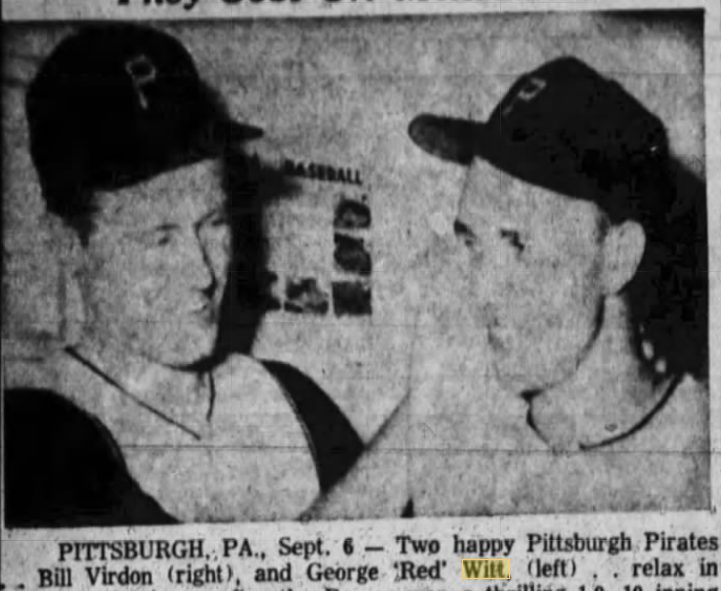 Here’s the boxscore and play-by-play courtesy of Baseball-Reference.