Today’s Card of the Day features Nick Kingham, a one-time Pittsburgh Pirates prospect, who turns 29 years old today. The card is from the Topps Now series and it’s the first one that we have featured here from that particular series. Topps Now cards have a one-day print run, which is based entirely on the amount of cards they sell over a 24-hour time period. The subjects for each card are based on action around baseball from the previous day. Today’s card highlights Nick Kingham’s Major League debut, which was a dominating performance over the St Louis Cardinals.

Nick Kingham debuted in the majors on April 29, 2018 and he was perfect for the first six innings. He recorded two outs in the seventh inning before giving up a hit. He was pulled after seven shutout innings with one hit, no walks and nine strikeouts. That rookie debut made him a popular subject for a Topps Now card, leading to a print run of 1,106 cards. For a comparison reference, a walk-off homer by Starling Marte in 2017 had a print run of just 330 cards, while a card of Austin Meadows printed shortly after his debut had 794 cards printed. 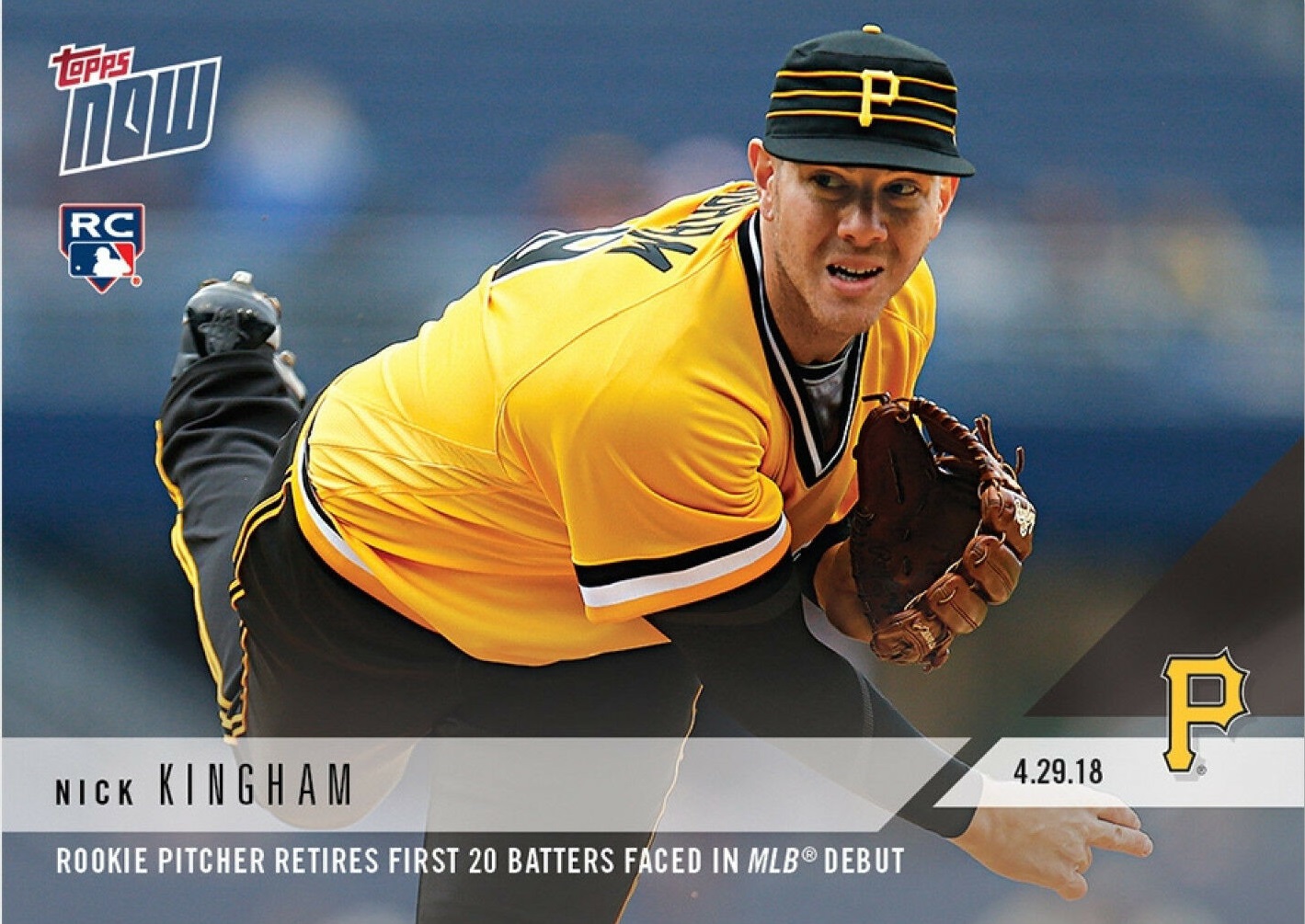 I really like horizontal poses, but that could just be from the fact that they’re almost always action shots, which have much more eye appeal than portrait or staged action photos. It also helps that Kingham debuted while they were wearing throwback black and gold uniforms, along with the popular pillbox caps. With some old cards you can figure out a date that the picture was taken with clues, but you don’t need that here. Kingham debuted the day before these cards went on sale, so you know without a doubt that the photo was from his first game.

These Topps Now cards are great products and the photo above doesn’t do it justice. They are a bit pricey, and you’re buying the card with no idea about potential future value because you don’t know what the print run will be until it’s too late to purchase it from Topps. That’s not really bad because these cards have a strong secondary market on Ebay from dealers who will take pre-orders, then place their order based on their own sales. Topps offers a large discount with quantity, so those savings get passed on to customers. What you lose from purchasing directly from Ebay is a special holder that a solo card is packed in. I personally only purchased one card from Topps and that was one printed for charity, so it didn’t feel right going for the discounted version. The holder is cool, but I’m fine with paying less, getting a plastic holder and putting the savings towards other cards. During the 2018 season I purchased all of the Pirates Topps Now cards, so this Kingham card is in my collection.

The “RC” under Topps Now in the top left-hand corner stands for Rookie Card. The reason for each card being selected is always on the front under the player’s name. 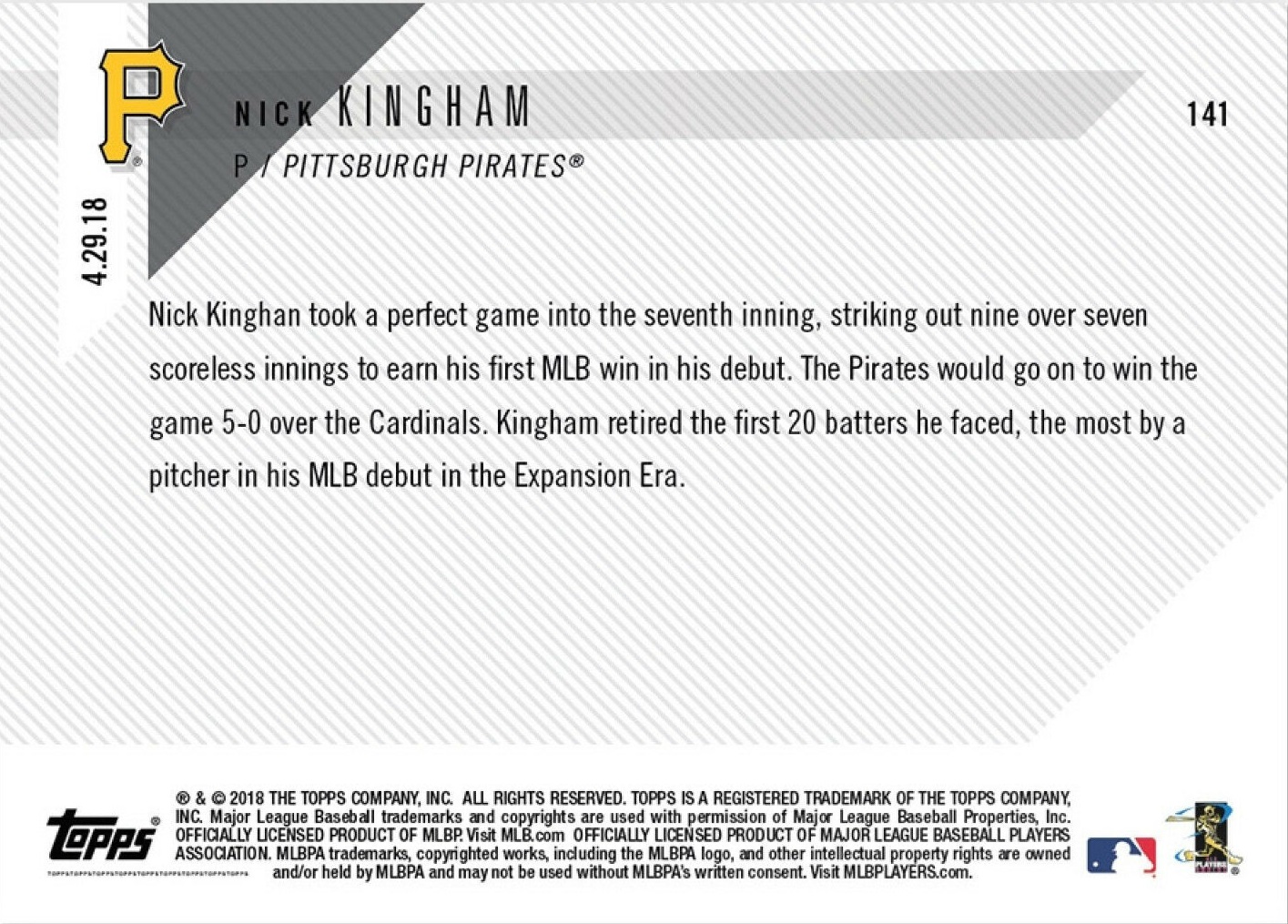 The back is basic, with a description of the event mentioned on the front. Notice that the first “Kinghan” is spelled incorrectly. They obviously didn’t correct it because these cards are printed solely based on the one-day sale. Topps actually wrote more legal mumbo jumbo at the bottom of the card than they did for the description of the game.

This card can be found for about $5-$6 on Ebay, with numerous seller options available in that range, some with quantity available. Since these cards cost more than that new, you’re probably not going to find them much cheaper. The fact that Kingham didn’t do well after his debut, plus the print run was higher than most cards, makes this one of the most affordable Topps Now cards on the market. The high quality photo, plus the horizontal pose, mixed with the throwback jersey, still makes this a nice collectible for Pirates fans.