On this date in 1976, the Pittsburgh Pirates completed a trade with the Oakland A’s to acquire manager Chuck Tanner. We haven’t had any Chuck Tanner cards in this feature yet, and there are plenty to choose from, so it’s a good day to make up for that snub. Today’s Card of the Day is #494 in the 1978 Topps set, Chuck Tanner player/manager combo card.

Tanner is well-known as the manager of the Pirates because he led them to their fifth World Series title. It’s the accomplishment that defines his career. He was also in Pittsburgh for nine years, so combined with the title, he’s recognized for his Pirates career. However, he not only managed ten other seasons in the majors, he also had a decent little career as a player. He played for four teams over eight seasons from 1955 until 1962. This 1978 Topps card commemorates his playing career and his managerial career. 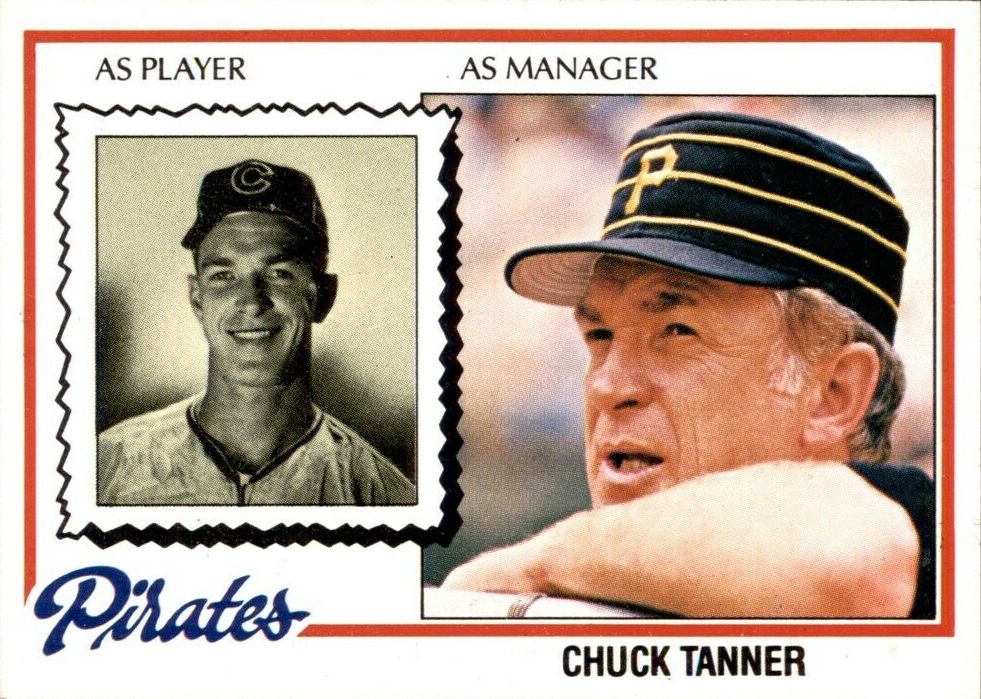 On the right-hand side, a young Chuck Tanner is shown with the Chicago Cubs in a black and white photo. He joined the Cubs during the 1957 season and also played there in 1958, batting .280 in 168 games. In that photo, he is somewhere between 28 and 30 years old. We know the photo on the right is from the 1977 season because that was his only year with the Pirates up to that point. The 1978 Topps set would have been released long before the 1978 season started. The black and gold pillbox cap is a nice addition to any Pirates photo from that era. The team name at the bottom just lists the current team, even though it’s under the photo of him with the Cubs. That’s not a mistake, just a decision made by Topps with these particular cards. 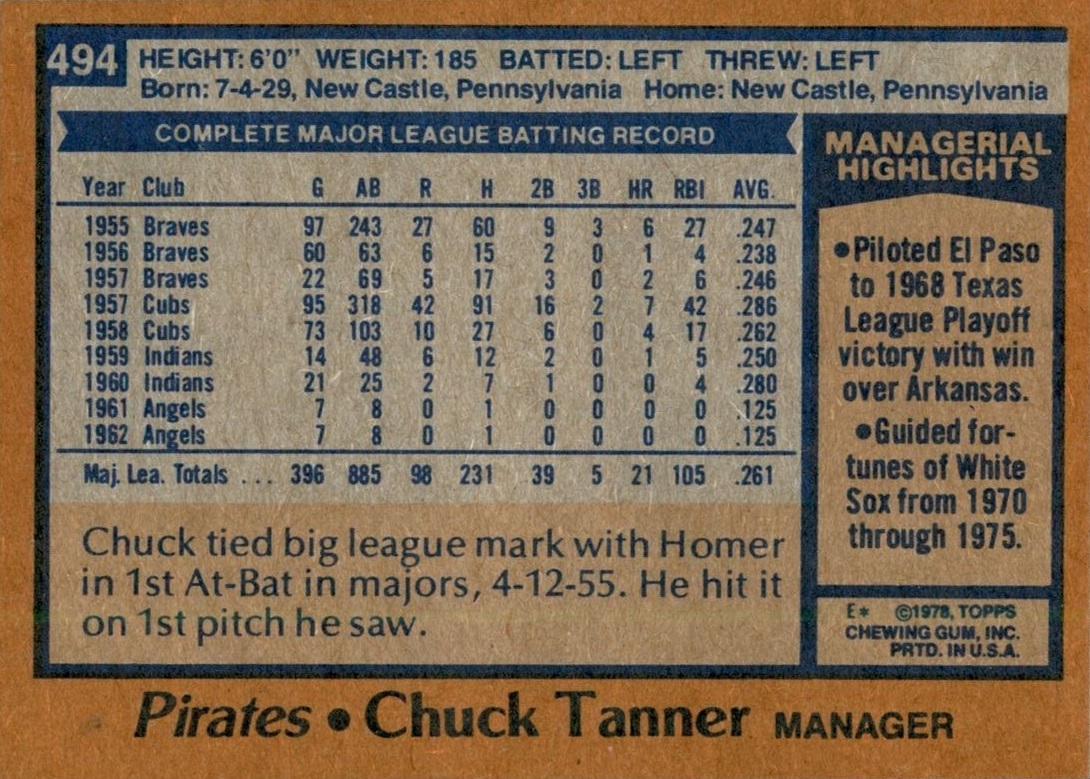 As you can see, the back of the card has his stats as a player and not his managerial records. Besides the manager title next to his name (which would be the position listing for active players), the only managerial notes are on the side. One mentions his minor league title in 1968 and the other notes his time with the Chicago White Sox. It doesn’t mention his one season with the Oakland A’s. Tanner immediately became a manger after his playing days were over. He already had eight seasons of managerial work in the minors before taking over the 1970 White Sox late. The card notes at the bottom that Tanner homered on the first pitch he saw in the majors. That was not a sign of things to come. He finished with 21 career homers.

This isn’t a tough card to find and it’s a common in the 1978 Topps set. Some people will collect it as the player/manager subset, but not enough that it adds value to the card. It’s interesting to note that recent Ebay sales show two auctions for PSA 10 Gem Mint copies, which is the highest grade that a card can reach. Those examples sold for $38 and $42 total. So even the best examples of this card that exist won’t break the bank. One other thing that is interesting is that you can find numerous autographed examples on Ebay right now. Tanner passed away in 2011, but people had 33 years to get his autograph on one of these cards, and after he won the World Series in 1979, it became a more desirable autograph. You can pay about $25-$30 and get an authenticated autograph, or about $12-$20 and get one that hasn’t been graded. If you just want the plain old card is nice condition, it will cost about $2-$3, including shipping.