For the 90th birthday of Pittsburgh Pirates great Dick Groat, we are featuring his 1954 Topps card. It’s also the first 1954 Topps card that we have used in our Card of the Day feature. The 1954 Topps set was put out in three different series, with 250 cards total. Groat was part of the first series, which consisted of just 50 cards. If you collect modern cards and haven’t handled a 1954 Topps card, you probably don’t know that they are slightly bigger cards. There’s been a recognized standard size for cards for a lot longer than I’ve been on this planet, but the size hasn’t always been the same throughout the years for Topps. They measure 2-5/8″ by 3-3/4″, while standard current cards weigh in at 2-1/2″ by 3-1/2″. The first year that Topps used the latter since was 1957. 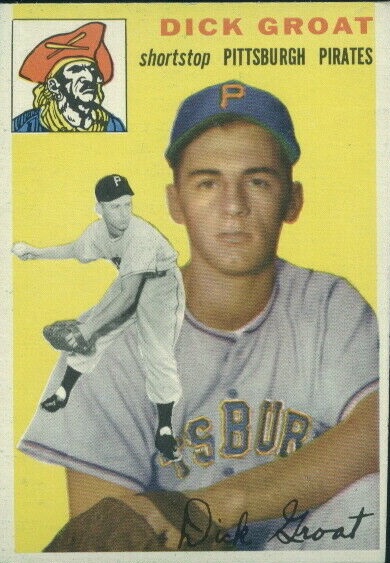 Groat is still a young man in theses photos, which had to be from the 1952 season, since he wasn’t around in 1953 (see back details below). The 1952 season was his rookie year and he did well after joining the club in June, hitting .284 the rest of the way. The Pirates uniforms were black and gold at this time (since 1948), so I’m not sure why they used the old colors, but they did on all but one of the Pirates in the set. For some reason just Hal Rice has the black and gold hat.  Not all of the Pirates had yellow backgrounds on front, but that color was used more often than any of the other colors used in the set (green, orange, blue and red). The best part about the front (in my opinion) is the old time Pirates logo. 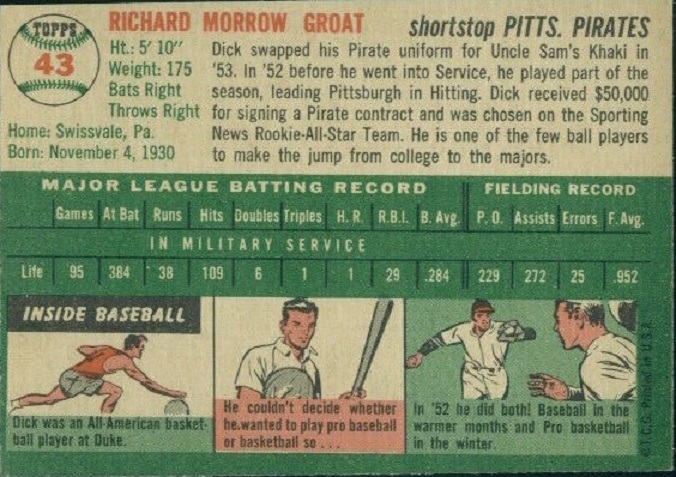 There’s obviously a lot going on here. There’s a great bio on the back here covering Groat’s military service, his large signing bonus, his selection to the Sporting News Rookie All-Star team, and the fact that he skipped the minors and went right to the majors. He got a 1954 Topps card despite the fact that he wasn’t in the majors in 1953, serving in the military. The bottom part has a three-panel comic talking about his basketball playing at Duke and his pro career, which they didn’t know was already over at the time. Groat was the third overall draft pick in the NBA in 1952, selected by the Fort Wayne Pistons. He played with them after the 1952 baseball season ended, averaging 11.9 points per game in 26 games. Considering how well his baseball career went, I think he made the right choice by sticking to baseball.

This card is probably cheaper than you expect for such an old card of a good player. You can get it for $6-$8 in decent shape on Ebay (delivery included). If you want nice graded versions, the price goes up, though a PSA 7 recently ended for $43, so that’s a nice condition card for a price that won’t break the bank. Jump up to a PSA 8 grade and two just recently ended between $92-$100. Grading is subjective though, done by humans, so if you find the nicest PSA 7, I can guarantee that it’s in better shape than the “worst” PSA 8 example.