Today’s Card of the Day is one that I’ve been saving for a little bit, then decided to use it today for no particular reason. You really didn’t need to know that. It’s part of a subset in the 1985 Topps set, featuring father/son combos on the same card. Topps produced 13 of these cards in 1985, which featured an active player on one side (the “son” obviously) and a photo of their father on a Topps cards on the other side. There are a few options from this subset that I could have used today (see list below), but I went with card #137, which featured Vern Law and Vance Law. 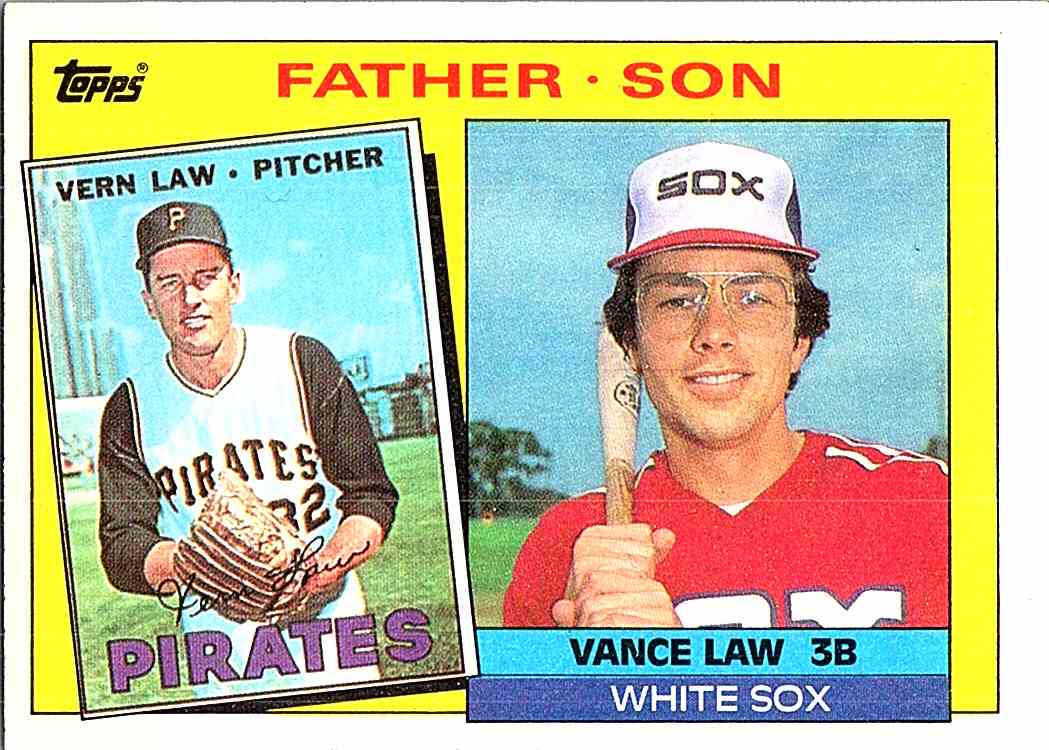 The card on the left of the Deacon is from the 1967 Topps set. It was his last Topps card as a player. He played for the Pirates from 1950-67, missing the 1952-53 seasons due to military service. Vern Law won 162 games for the Pirates, sixth most all-time. He ranks second in team wins over the last 100 years, trailing long-time teammate Bob Friend. Law and Friend are two of the four pitchers pictured on one card from the 1959 Topps set titled Buc Hill Aces. The younger Law is pictured with the Chicago White Sox, which is where he was playing in 1985. It made sense, since they were showing current players, but it would have been an even better card if they had him pictured during his brief time with the 1980-81 Pirates.

The catch here with Topps is that they needed a Topps card to be included in the set, so not every father/son combo with an active son was pictured in the set. The one example that came to mind was Jerry Hairston, who had a 1985 Topps card, but his father Sam Hairston didn’t get a card for his brief time during the 1951 season. If they included them, then you would have had four of the five families with three generations in the majors in this one subset. 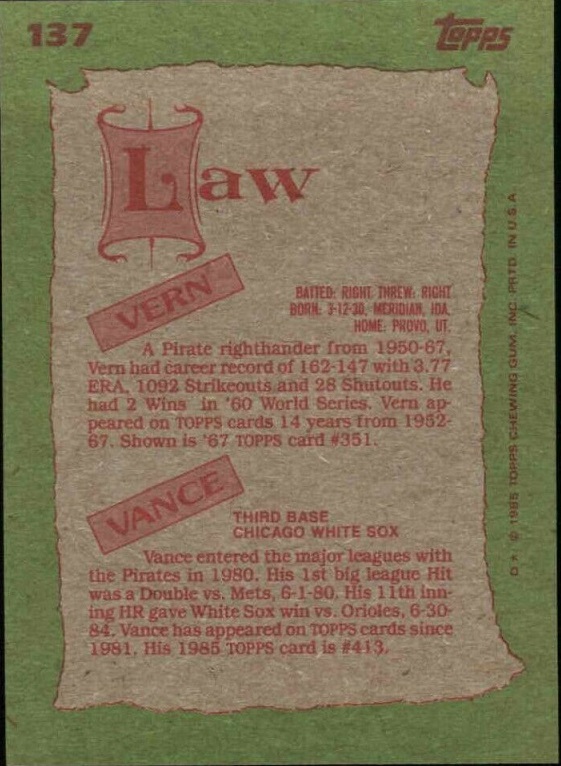 As you can see, the back has a little bio on each player. Vern Law obviously put together quite a career, so it’s hard to mention everything of note in such a small section. However, you would think that his 1960 Cy Young award is one of those things that has to be mentioned. While the younger Law is shown on the Chicago White Sox, the first thing the back mentions is that he played for the Pirates. His first hit mentioned above came during his big league debut.

I also like that they note the Topps cards for each player. Vern Law appeared in 14 different Topps sets, not including any random smaller sets that they put out during the year. I mentioned that he played from 1950 to 1967, but he didn’t get a card during his first two seasons, or in 1953 due to his war service. He had a 1954 Topps, despite not playing the previous year, but in 1955 he only appeared in the Bowman set. He was in the Topps set over the next 12 years. The younger Law first appeared on a 1981 Topps card, which we featured here. It’s a Future Stars card, which also included Tony Pena and Pascual Perez.

You can find these card readily available on Ebay and it will cost you about $2, including delivery. For a few dollars more, you can buy the entire 13-card father/son subset, which includes other Pirates. Dick Schofield, Bob Skinner and Dale Berra are all shown in Pirates uniforms, while Gus Bell and Ozzie Virgil also played for the Pirates, but they are shown on other teams. The Law card is the only one that shows two former Pirates.