With today being Halloween, I decided to do a Game Rewind that had a holiday theme. My first thought was Spook Jacobs from the 1956 Pirates, but I settled for a big game from Bones Ely from the 1901 team. How could you not be terrified when looking at this photo of him taken shortly after his time with the Pirates? 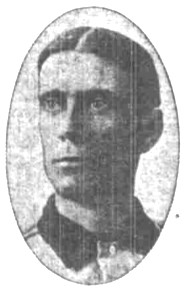 This game on Saturday, July 20, 1901 at Exposition Park pitted the 1900 National League champs (Brooklyn Superbas) against the eventual 1901 NL champs. The Pirates were in first place and had a three-game lead over Brooklyn going into the day, but the Superbas won the first three games of the series. The race for first place at the time was actually closer than that. Here were the NL standings going into the day:

As you can see, this was a very important mid-season game. The Pirates had Deacon Phillippe on the mound. He had already picked up 13 wins, back when pitchers completed what they started. He also had an ERA under 2.00. Brooklyn was going with Doc Newton as the starter. He had a 4-14 record at the time, with an ERA over 4.00, but all of that came while he was with the Cincinnati Reds. This was his debut for Brooklyn.

Each team had a pair of future Hall of Famers in the lineup. The Pirates had Fred Clarke batting lead-off. He was the manager and left fielder, so he put himself in that spot. Honus Wagner was batting in the cleanup spot. The Superbas had former Pirates outfielder Joe Kelley in the lead-off spot, followed by second place hitter Wee Willie Keeler, one of the best pure hitters ever. I can’t just leave it at that though for the Hall of Fame talk. Brooklyn also had Bill Dahlen batting fifth. Start rant.

Back when people were mad that Derek Jeter didn’t get 100% of the Hall of Fame votes, there were a handful of baseball historians who didn’t care because the best New York shortstop not in the Hall of Fame prior to that announcement was Bill Dahlen, not Jeter. The fact that Dahlen played his final game in 1911 and he isn’t in Cooperstown yet is a travesty. Dahlen ranks 78th to this day in WAR thanks to a combo of strong offense, mostly during the deadball era, along with all-time great defense. In the first 40 years of the majors, only 11 players put up more WAR and only five of them were position players. The sixth best position player in the last 40 years (by WAR) is Cal Ripken Jr. Can you imagine if he had to wait 109+ years to make the Hall of Fame? Do you know who else Dahlen ranks over in WAR from his day and by a decent margin? Fred Clarke, Willie Keeler and Joe Kelley. End rant.

Brooklyn got on the board first in this game, started by a one-out single up the middle by Keeler. He moved to third base on a single from Jimmy Sheckard, then scored on a ground out by cleanup hitter Tom Daly. That was the only scoring of the game over the first 3 1/2 innings. The Pirates got to Doc Newton in the fourth. Lefty Davis started the inning with a walk, then Honus Wagner sent a line drive to left field. Jimmy Sheckard came running in to make a shoestring catch, but the ball bounced right before him and he couldn’t stop the ball from getting by. It rolled all of the way to the fence. By the time it was chased down, Wagner scampered around the bases for an inside-the-park home run.

With the score 2-1, Kitty Bransfield followed Wagner with a single to left field, then moved to second on a poor throw by Sheckard. Claude Ritchey reached on an infield hit to put runners on the corners. Bones Ely followed with an RBI single, then Chief Zimmer brought home the fourth run with a single. The Pirates nearly got more when Fred Clarke hit a liner that had right-center gap written on it, but it was snared by second baseman Tom Daly and turned into a double play.

Ginger Beaumont created a run in the fifth. He reached on a bunt attempt, with first baseman Joe Kelley unable to handle the throw from Newton for an error. Beaumont stole second and then stole third with two outs. Kitty Bransfield brought home Beaumont with a single to left field, making it 5-1. Claude Ritchey then reached on a bunt hit to put two men on. Bones Ely sent a single to center field, where Brooklyn’s Tom McCreery, formerly of the Pirates (1898-1900) fumbled the ball in his haste to make the play. That allowed Ritchey to score from first base. Ely was credited with the RBI for Bransfield’s run.

While Phillippe was cruising along in this game, he got some help from third baseman Honus Wagner in the sixth. Brooklyn cut the lead to 7-2 in that inning, but a long running catch by Wagner helped keep the Superbas from possibly adding more. Brooklyn went to reliever Kid Carsey in this inning and he got help from Willie Keeler in right field, who made a very difficult catch.

In the seventh, the Pirates started to put this game out of reach. Once again, it began with a walk to Lefty Davis. Wagner singled into right field. Willie Keeler tried to cut down Davis going to third base, but the ball took a high bounce over the head of third baseman Charlie Irwin and Davis was able to score, while Wagner got all the way to third base. One batter later, Kitty Bransfield singled to bring in Wagner and make it 9-2. The next play sounds like it was interesting.

A grounder to second base turned into a double play when Brooklyn’s Tom Daly tried to tag Bransfield, who stopped and went back towards first base. Daly threw to Kelley for the out, then as Bransfield headed back towards second, so Kelley threw back to Daly. He chased Bransfield all the way back to first base, tagging him before he got back to the bag. Your typical 4-3-4 double play.

This game became one-sided in the eighth. Chief Zimmer was hit by a pitch, then moved up a single by Phillippe. Fred Clarke made it 10-2 with a single, then Phillippe scored on a ground out by Beaumont. A double from Lefty Davis scored Clarke to make it 12-2. The merry-go-round continued, with a Wagner single making it 13-2. Bransfield singled, then Wagner scored on a ground out by Ritchey. The final run scored on a single by Ely, bringing in Bransfield from second base. The Pirates were up 15-2 and Phillippe quickly closed things out for his 14th win.

Ely finished the day 3-for-5 with three RBIs. That’s quite a way to go out with a team. Oh, did I not mention that Bones never played for the Pirates again? The local papers noted that he was released without a reason given, while Ely told the papers a few days later that manager Fred Clarke wouldn’t talk to him. Two weeks later, Ely signed with the Philadelphia Athletics, where he played through the end of the season. He spent the 1902 season with Washington, his final year as a player in pro ball.

It was later noted that 38-year-old Ely was talking about jumping to the upstart American League with former teammate Connie Mack, who was the manager of the Athletics at the time. The Pirates found out about the talks and released Ely. The fact that he was hitting .208 and had lost a step made their decision easier. With their veteran shortstop out of the picture, it opened the spot for Honus Wagner, who made starts at every position except catcher, pitcher and shortstop in his four seasons prior to 1901.

Here’s the boxscore from the game. The play-by-play came from multiple newspaper accounts from the day. 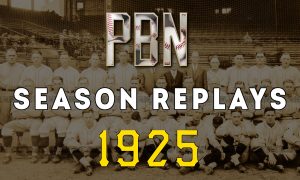