Today’s Card of the Day article honors the man who turns 85 today. The best strikeout pitcher in Pittsburgh Pirates history. In 1965, Topps included league leaders cards. Their card for the National League strikeout leaders for pitchers featured three players. That year, Bob Veale led the league in strikeouts. He was joined on the card by two great pitchers from his era, Bob Gibson of the St Louis Cardinals and Don Drysdale from the Los Angeles Dodgers. Veale was the leader though, so he got the bigger spot on the card. 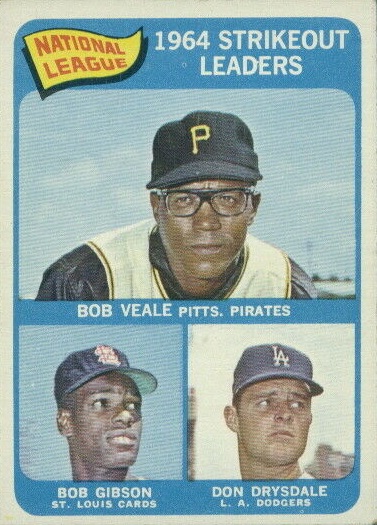 As you can see, Veale gets the spotlight, with a photo slightly bigger than the other two players combined, who lose a little of their bottom half due to the blue divide line. The photo of Veale looks very similar, but not exactly the same, as his 1963 Topps cards, with the vest uniform and dark-rimmed glasses, looking intently just off-center of the camera. Topps would use this same photo the next year on their 1965 NL Strikeout Leaders card. Veale picked the right year to lead the league. The following year everyone got the same size photo on a horizontal card with three frames. 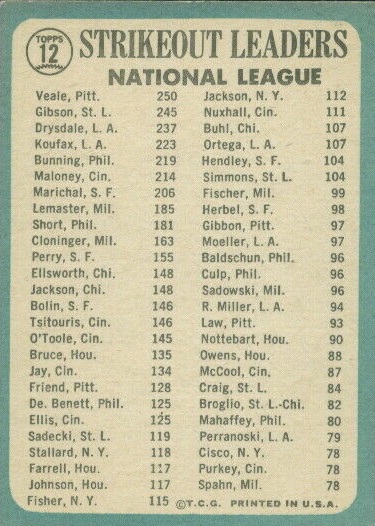 I love the fact that they listed so many names on the back. It really gives you some great history of the game all in one place. Veale struck out 250 batters, just five ahead of Gibson and 13 ahead of Drysdale. Veale struck out five batters over two innings on the final day of the season. Gibson struggled through four innings on the final day of the season, picking up just two strikeouts, while walking five batters. The interesting part is that he started two days earlier and pitched eight innings. The Cardinals were actually fighting for the pennant on the final day, so they went with their best pitcher. If Veale didn’t pitch in relief for the Pirates that day, he would have finished in a tie for the strikeout lead. As a side note, that final game actually pushed Gibson’s ERA over the 3.00 mark (2.99 to 3.01).

The top 50 (stretched to 51 here due to a tie at the end) has three other Pirates pitchers. With ten teams in the league at that point, the average team would have five players on this list. Bob Friend finished 19th and was the only Pittsburgh pitcher besides Veale to reach double digits in strikeouts. The second half of the list has Joe Gibbon and Vernon Law. How close were the Pirates to having five players on the list you ask? Steve Blass was fifth on the team with 67 strikeouts. That was his rookie year and he didn’t debut until May 10th, plus he pitched in relief half of the time.

These league leader cards are great for getting cheaper versions of Hall of Famers. As a Pirates fan, Veale is obviously the draw here, but he’s paired up with two Hall of Fame pitchers on this card to add to the attraction. Even with the star power, you can get this card in nice shape for just under $10. If you want to go for a high grade version, the price can get a little costly. Hold on to your seats for this price. A PSA 10, a card considered to be perfect (gem mint), recently sold for $2,200. A PSA 9, which looks like a 10 at first and even second glance, sold for $150. Go down one grade to a PSA 8 and it cuts the price down to approximately $50. If you want the best, then it’s quite the expenditure, but ones that look just as nice can be had for a fraction of the cost.