Fleer printed their first full set in 1981, with 660 cards needed for completion. At the same time, they also printed a Star Stickers set, which highlighted 125 of the best players (technically 124, since one card shows three players already pictured), plus three players were repeated on checklist cards, giving the set 128 cards total. One of those players was Omar Moreno, the star outfielder for the Pittsburgh Pirates. He was one of six Pirates in the set. 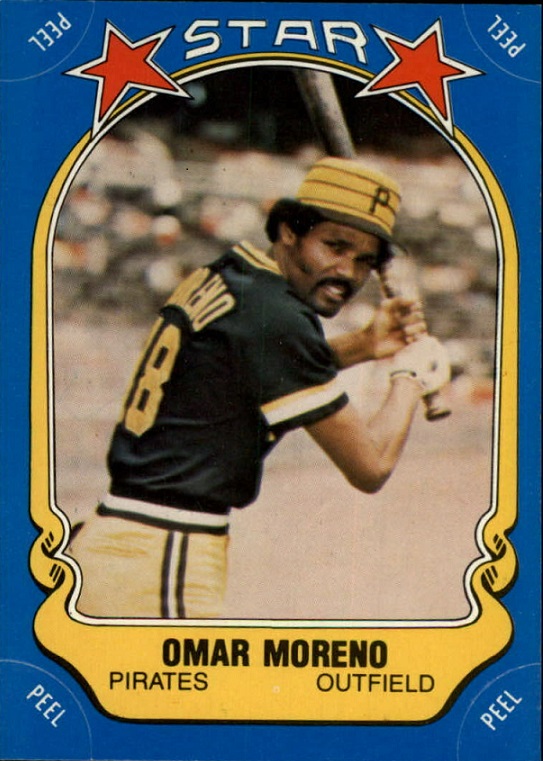 As you can see, these cards are actually stickers as well, with the little peel tabs in the corners. Obviously if you’re a collector, then you didn’t take the sticker off of the cardboard backing. Not every person followed that thinking back in 1981, especially not young kids. That makes these cards slightly tougher to find now, since a lot of them were no longer “cards” shortly after kids got them.

While it appears that Fleer took photos for their regular set at the same time as the sticker set, they did not use the same pose for players in both sets. Moreno is seen here in a staged batting pose, looking directly at the camera. He’s wearing the gold pillbox cap, along with one of the popular mix-and-match uniforms from the great days of the past. On his regular Fleer card, he’s kneeling, one knee on the ground, bat at his side, looking towards the camera with a smile. A bit different than the more serious look here, as he’s thinking about getting a single, then stealing second and third base. 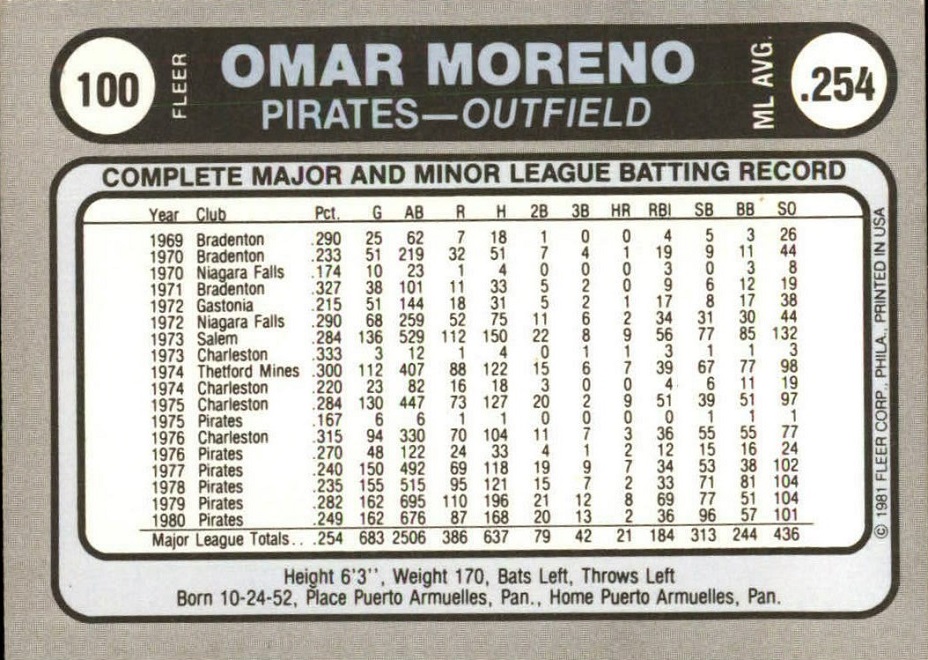 The back of these cards are nearly identical to the regular 1981 Fleer set except the color. The regular set had the same white background and black letters/numbers in the stat area. It also had the same light gray border. The only difference is that the light blue, which is easier to see in the letters up top than around the stats section, is all yellow on the regular cards. I like this set because the stats are easy to read and they include minor league stats. You’ll also notice than Moreno got #100 in the set.

This sticker/card is much tougher to find than the regular Omar Moreno card, but there isn’t much value added with that scarcity. You can find his cards on Ebay in the $2-$3 range, with half of that cost being the shipping. I’ll note one interesting recent auction. Someone sold a PSA 10 (graded as perfect condition) for $35 total. That’s a tough particular card to find because not many people grade these cards and a large majority aren’t going to come back as perfect. You also might want to consider getting the Pirates team set for a few bucks more, or the entire set for around $35 (yes, the same price as one perfect Moreno card).