Today’s Card of the Day features Hall of Fame pitcher Jim Bunning, who spent two seasons with the Pittsburgh Pirates. He’s much better known for his time in Philadelphia with the Phillies and his work with the Detroit Tigers. So it’s a bit surprising that he was featured on a set honoring baseball legends, wearing a Pittsburgh Pirates uniform. The fact that they chose to feature him as a Pirate in this 110-card set makes it worthy of a Card of the Day feature, especially today with Bunning being born on this date in 1931. 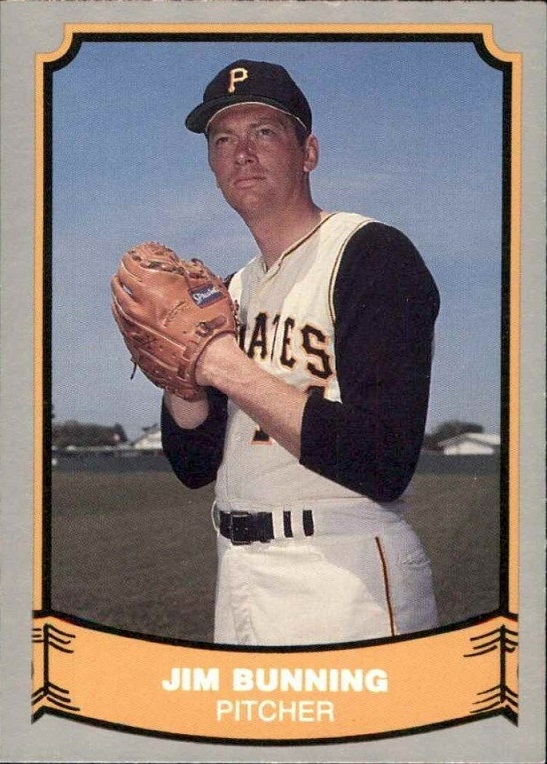 Bunning had two Topps cards while with the Pirates. He was in the 1968 and 1969 Topps sets. Both sets pictured close up portrait shots with Bunning sans cap. There was a great reason for their choices each year. They didn’t have pictures of him with the Pirates. Both cards show him in a Phillies uniform, but the only reason you know that is because of the collar/strips that are barely visible. They are red in each picture. So getting a photo of a player without a hat allowed the good people at Topps to crop the photos just right so you couldn’t see the wrong team name/logo anywhere.

That’s what makes this Pacific Legends set so great. Bunning by no means is a Pirates great, his time in Pittsburgh was disappointing, and the trade they made to acquire him turned out to be a disaster when Woody Fryman and Don Money both became All-Stars (plus two other players were sent to Philadelphia). That being said, he was an all-time great and he spent time with the Pirates, so getting a card showing him in the full Pirates uniform makes this a terrific offering. He won 118 games in Detroit in nine years, another 89 games in six seasons with the Phillies, but they atoned for Topps not showing Bunning with the Pirates by choosing this pose. 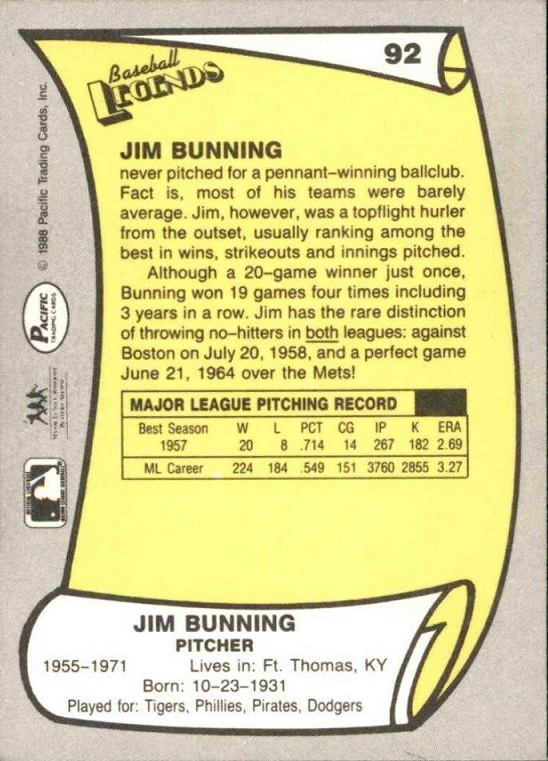 The back has the stats from what they considered to be his best season, as well as his entire career stats for seven categories. If you live and die by WAR, then the 1957 season was far from his best. He had a 6.3 WAR that year, which is obviously great. However, it’s topped by 6.6 WAR in 1960, 7.8 in 1967, 8.0 in 1965 and 9.0 in 1966. The back has some brief bio info about him, including how he never pitched for a pennant winning team. He also threw a no-hitter in the American League and a perfect game in the National League.

The list of players to throw no-hitters in each league includes Cy Young, Hideo Nomo, Nolan Ryan, Randy Johnson and Bunning. When Bunning pulled it off, the list included only Cy Young. If you include all Major Leagues since 1871, the list only expands by one. Ted Breitenstein pitched one in his first career start on the final day of the American Association (the league did not exist after 1891 as a Major League), then he threw one in the NL seven years later over the Pirates. Bunning is in elite company because he’s a Hall of Famer, but his no-hitter feat also puts him in a rare group.

This card is readily available on Ebay for $2-$3 delivered. There are also numerous signed examples for sale. Instead of just grabbing the Bunning, I would suggest the entire 110-card set. You can grab one of those for about $15 delivered. The set also includes Bill Mazeroski, Bob Friend and Bill Virdon, three players who are better known for their time in Pittsburgh.