Today’s Card of the Day comes from the 1965 Topps set and features a lefty pitcher who turns 79 years old today. Wilbur Wood pitched for the 1964-65 Pirates, while spending the 1966 season in the minors with their Triple-A affiliate. Before joining the Pirates, he pitched parts of four seasons with the Boston Red Sox, though that only amounted to 91 innings total. He had his rookie card in the 1964 Topps set while still in Boston. This 1965 Topps card is his only card showing him with the Pirates. 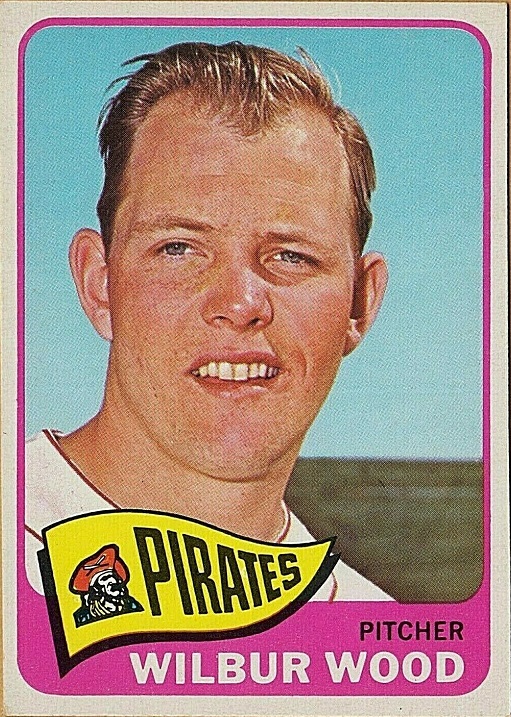 While he’s shown as being with the Pirates, this card pictures him wearing the Red Sox home uniforms. Wood joined the Pirates in early September of 1964, so Topps likely had all of their photos already for the upcoming season. What they would usually do in situations like this is airbrush the jersey/cap. Instead, they chose a photo of him without a hat and did an ultra closeup. However, those red strips at the top of the jersey clearly aren’t from the Pirates, so they could have done a quick airbrush job to make it correct. The big Pirates pennant with the great old school logo covers up some of the “error”. 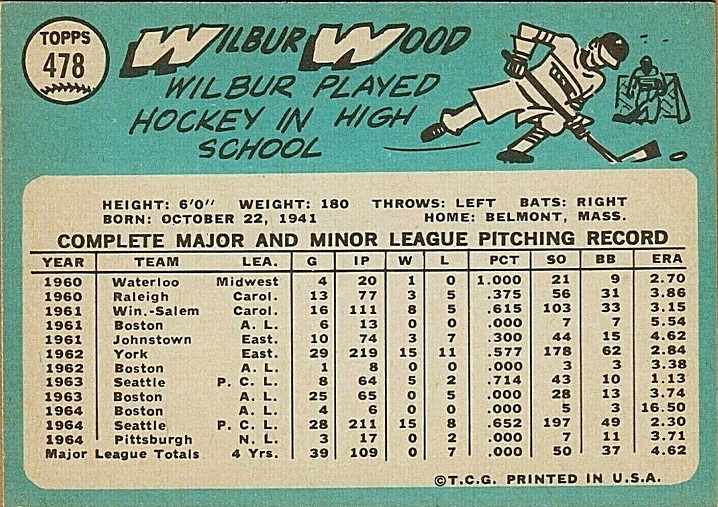 I like the back stats on these cards because they are easy to read. Standard black type on a white background, it always works. The light blue border around the back is used for all of the cards, though it appears a little darker on some of the cards. That’s not a different color, just a printing process issue.

As you can see on the back, Wood began playing in the minors in 1960 at 18 years old and he was quickly in the majors, debuting in 1961. However, four seasons into his career, he was still looking for his first big league win. That would come on August 29, 1965, when he pitched a scoreless sixth inning and the Pirates took the lead in the bottom of the inning. Wood began his career as a highly regarded fastball/curve pitcher, but he developed into a superstar years later when he mastered the knuckleball. For a guy who won just one game in his first five big league seasons, he made up for it in a big way in later years. He won 163 games from 1967-78, and that’s with four of those seasons spent in the bullpen, and an injury costing him almost all of 1976.

Since this card is part of the high number series, that adds to the value. It’s not an expensive card though, despite his success as a pitcher. You’re going to pay at least $5 shipped for one in decent shape. Higher grade ones will run about $20, with a PSA 8 recently selling for $27 on Ebay. It’s not that tough to find and there were 68 examples listed on Ebay as I wrote up this article, but it’s tough compared to other 1965 Topps low number cards. Most of those examples listed on Ebay are in the $10-$15 range.