Some of the players we feature here in this series went on to Hall of Fame careers. Others either played a long time or they were solid role players. They all have the same thing in common. The Pittsburgh Pirates had them at one time early in their career and they gave up on them too soon. Today’s article deals with infielder Harry “Cookie” Lavagetto. He played his first three seasons in the majors with the Pirates, but they traded him just three days after his 24th birthday to the Brooklyn Dodgers. Lavagetto went on to make four straight All-Star teams before enlisting in the Navy during WWII. That four-year interruption cost him a brilliant career in the majors, but it was never a decision he regretted. The Pirates likely regretted the trade of Lavagetto right away because they came up on the losing side. That makes Cookie Lavagetto the One Who Got Away.

The Pittsburgh Pirates bought Lavagetto from the Oakland Oaks of the Pacific Coast League on September 13, 1933 for cash and a player to be named later. Lavagetto was in his first season of pro ball at the time, hitting .312 that season with 44 extra-base hits in 152 games. He remained with the Oaks after the deal, joining the Pirates during the following Spring Training.

An interesting note at the time is that he was being referred to as the 18-year-old second baseman, but he was actually 20 years old at the time. Doing research all of these years, it seemed like a popular practice to change ages back then. Some went younger to make it look like they had inexperience and room to grow as players, plus a longer career ahead of them. Others went older so they could sign sooner.

Lavagetto made the Pirates out of Spring Training in 1934. He age was still wrong at that time, so the thought was that he made the team as a teenager. He didn’t just make the team though, he was the Opening Day second base and he played 36 of the first 38 games that season. Lavagetto missed seven games in early June due to illness, but returned to the starting lineup on the 12th and held the spot until July 6th. He was hitting .239/.300/.348 through his first 60 games and the Pirates had a 37-31 record. At that point, they decided to go to veteran Tommy Thevenow and it did not work out well. The Pirates went 37-45 from that point out, finishing the season below the .500 mark.

Lavagetto played just 12 games from July 7th through August 17th and only seven were starts. He got another brief chance to start in late August, with Thevenow shifting to third base, but Cookie saw his stats drop to .224/.297/.328 by August 29th. The next game saw player-manager Pie Traynor return to the lineup and Lavagetto went to the bench. He would play just three times in September, with his only start coming in the final game of the season

On September 1st, there was an article with a quote from Traynor saying that Lavagetto would go to the bench, but he needs to be ready for the 1935 season because the Pirates will be rebuilding that year and he should see plenty of time. That turned out to be true early on, but by mid-May of 1935 he was a bench player again. Lavagetto was hitting .255/.311/.316 on May 17th, playing in 25 of the first 28 games. From May 18th until September 11th, he received just 85 plate appearances.

For the last three weeks of the 1935 season, Lavagetto took over at third base, with Traynor sending himself to the bench. Once again they said that this was a move looking towards the next season, though this time Lavagetto actually played. Traynor wasn’t expected to play much in 1936, so they needed to get the 20-year-old (actually 22) experience. Lavagetto did great over the final 14 games, hitting .407 with three doubles and two triples. On the season, he finished with a .290 average.

The 1936 season was basically a repeat of the previous two years. Lavagetto was the Opening Day starter, this time at third base. He hit .273/.347/.500 in April. However, he suffered a leg injury that was supposed to keep him out for a short time. Instead, Bill Brubaker took his place and did a great job, keep Lavagetto on the bench through the end of the month. Between April 29th until May 28th, Cookie saw one pinch-hit appearance and nothing else. He got back in the lineup at second base at the end of May and was doing well through June 28th, but still lost his job when veteran Pep Young returned to the lineup.

Young’s return basically marked the end of Lavagetto’s time in Pittsburgh. In the team’s last 88 games of the season, he made two starts and saw 25 games off the bench, compiling just 27 plate appearances. In fact, he didn’t collect a single hit during the final three months, ending his time with the Pirates on a major down note. Considering that finish, it’s no surprising that the Pirates moved on from him, but it’s clear that they shouldn’t have been so hasty with that decision. 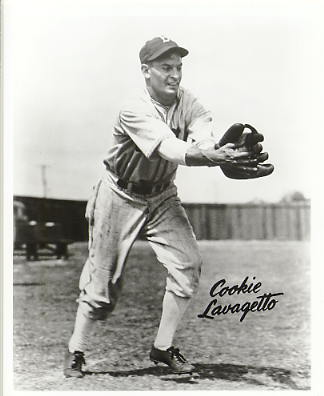 Lavagetto played well when he got the chance to play and he was still very young at the time, even if he wasn’t as young as he claimed at first. That wasn’t something known back then, at least in the press. The Pirates traded him and 28-year-old pitcher Ralph Birkofer to the Brooklyn Dodgers for 32-year-old Ed Brandt, a left-handed pitcher who posted a 3.50 ERA in 234 innings in 1936. It looked like a fair trade, as the Pirates upgraded their pitching staff, while the Dodgers got much younger. It did not turn out well. The exchange of pitching was a win for the Pirates, with Birkofer doing poorly in very limited time, while Brandt had a solid 1937 season, then he did decent in a limited role in 1938, which turned out to be his final season. By modern standards, the pitching part saw the Pirates get 3.7 WAR in two years for a guy who gave them 3.3 WAR in four seasons and lasted just 29.2 innings after the deal.

In his first season in Brooklyn, Lavagetto saw plenty of time at second base and sporadic time at third base. In 149 games, he hit .272/.375/.406 with 44 extra-base hits, 74 walks and 70 RBIs. He had similar results the next season as the everyday third baseman, batting .273 with 68 walks, 79 RBIs and 46 extra-base hits. That earned him his first of four straight All-Star appearances. His best season would be 1939, where the trade started to become one-sided. Lavagetto batted .300/.387/.416, with 87 RBIs, 78 walks, 93 runs scored and 43 extra-base hits. He also had his best defensive season, though he was still basically league average and known more for his bat.

Brooklyn got 11.8 WAR from Lavagetto  in five seasons before he enlisted in the Navy prior to the 1942 season. That’s the only thing that kept that trade from being a disaster. Lavagetto spent four full seasons in the Navy, something that the Pirates obviously couldn’t have predicted when getting rid of him after three seasons.  The time off from the majors did a number of Lavagetto’s skills and he was a role player in his final two seasons (1947-48), though he was still worth 1.2 WAR.

The Pirates gambled on using a young player as a trading chip and it didn’t pan out. He did well when he played every day in his last two years in Pittsburgh, so they had to know that there was a chance that he succeeded elsewhere, especially given his age. The fans in Pittsburgh didn’t seem to like the deal at the time,  but one unnamed opposing manager seemed to think the Pirates (Pie Traynor in particular) got a steal. He was actually off by one in his win count below for Brandt, though he was most certainly talking about the 1937 season and not the rest of his career. As for his assessment of Lavagetto, he was way off: 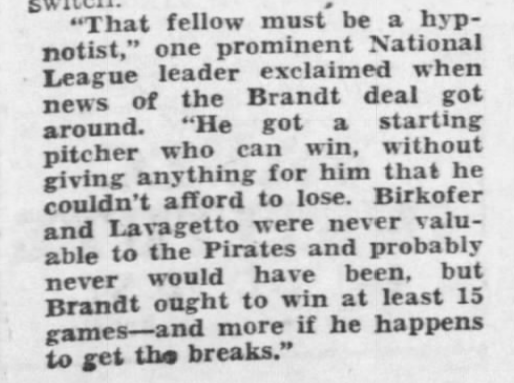 21 Oct 2020
The One Who Got Away
Cookie Lavagetto, Featured