Right before they played in the first modern day World Series, the Pittsburgh Pirates made a stop on the way to Boston. They had an exhibition game set up against the Buffalo Bisons of the Eastern League. It seems ridiculous by today’s standards, but in-season exhibition games were quite common back then, so why wouldn’t they play a game two days ahead of participating in the World Series?

The Buffalo team was no group of pushovers. Their lineup that day contained seven former and future MLB players. The starting pitcher, Alex Hardy, made three starts for the Chicago Cubs during the 1903 season. It wasn’t an even match-up by any means, but they weren’t playing a weak group of players.

One of the interesting things about this game is that the Pirates basically had no backups. They were traveling with their World Series roster, which could only include players who were there by September 1st. That group had a total of 15 players, which included an injured Tommy Leach, who was unavailable for the game. The other five players on the bench for the exhibition were manager Fred Clarke, catcher Ed Phelps and pitchers Sam Leever, Deacon Phillippe and Gus Thompson. Clarke was nursing a leg injury, so he technically wasn’t available either. The Pirates had to go with pitcher Brickyard Kennedy in left field and third-string catcher Harry Smith at third base, just to field a full team.

Smith was getting experience at third base for the first time, in case the Pirates needed someone in place of Leach. Not only was Leach injured at the time, but backup infielder Otto Krueger was also out of action, and he didn’t even make the trip. The Pirates had local amateur player Hans Lobert play five games for them at the end of the 1903 season, but he wasn’t eligible for the World Series, since he never actually signed with the team. They also could have used a local veteran named Bobby Cargo, who played for them back in 1892 and was an emergency option, but the same rules applied for him. When the World Series was set up, Pirates owner Barney Dreyfuss agreed to only use players signed on September 1st, which backfired in a big way when the Pirates were severely short-handed on the pitching side. That’s also why they were short-handed for this exhibition game. They weren’t going to bring players on this trip who weren’t eligible for the World Series.

In a game that was attended by 2,500 fans, many of them were there to see Honus Wagner, who was early in his career, but already a star attraction. He provided some of the biggest highlights in this game, both good and bad.

The Pirates threw out this lineup:

Veil was with the Pirates for all of 1903, but he made just six starts and six relief appearances all season. He ended up pitching seven innings in relief during game two of the World Series, allowing just one run. That came just three days after he pitched a complete game in this contest against Buffalo.

Jimmy Sebring was just two days away from forever putting his name in the baseball record books as the first player to hit a home run in modern World Series play. Fred Carisch was the only player on that 15-man roster who didn’t see any World Series action for the Pirates. They used the same lineup in five of the eight games, including Deacon Phillippe as the pitcher in all of those games. In fact, only ten players saw more than one game of action.

In this exhibition game, Buffalo got on the board first. Matty McIntyre, who would be a key part of the 1909 Detroit Tigers team that played the Pirates in the World Series, got Buffalo going in the first with a triple. He scored one batter later on a Charlie Atherton single. Atherton had MLB experience with the 1899 Washington Senators, and he batted .312 for Buffalo in 1903. McIntyre would hit a second triple later in this contest.

The game remained 1-0 until the top of the third when the Pirates pushed two runs across the plate. They did it with help from an error in the middle of collection four singles. Beaumont got the hitting started, followed by an infield single from Sebring. Two batters later, Wagner got in on the action, and then Bransfield capped off the rally with his own hit.

In the fifth inning, the Pirates extended their lead to 4-1. It started with a walk to Smith, who scored on a triple by Wagner. Bransfield once again capped the scoring, this time with a double.

The Pirates added one in the sixth on a bunt single by Beaumont and an RBI double by Smith, who made the third out at third base trying to stretch it into a triple.

The Buffalo fans didn’t have many highlights of their own at this point, but the first batter of the seventh was Honus Wagner and that’s when they gave their biggest cheer. Pitcher Alex Hardy managed to strike him out, which was said to have set the fans into a wild frenzy. It was Hardy’s only strikeout in the game. That would be the end of the highlights for the Bisons. The had some lowlights though. Buffalo third baseman Fred Hartman, who played for the 1894 Pirates and hit .319 in 49 games that season, got injured in this game and had to leave. He was 38 years old at the time, but still had four more seasons of pro ball ahead of him.

Up 5-1, the Pirates put the game away in the eighth, though Buffalo gave them a big assist. Beaumont collected another bunt hit. Wagner picked up his second triple. Bransfield hit his second double. That’s all the Pirates needed because the Bisons supplied the rest, committing four errors that led to a total of four runs in the inning. Veil closed out the game with eight straight scoreless innings for the victory. This contest took one hour and 45 minutes to play.

Veil allowed just three hits after the first inning. He didn’t walk anyone and he had five strikeouts. Wagner had a big day at the plate with three hits (two triples) and two runs, but he also committed both Pittsburgh errors. Bransfield had an outstanding day, collecting four hits, three of them in big spots. Beaumont had three hits and scored two runs. Smith had two hits, a walk and three runs scored. All nine runs were scored by the top four hitters in the lineup for the Pirates. This game was supposed to help Smith get some third base experience, but he didn’t have a single play in the field all game. 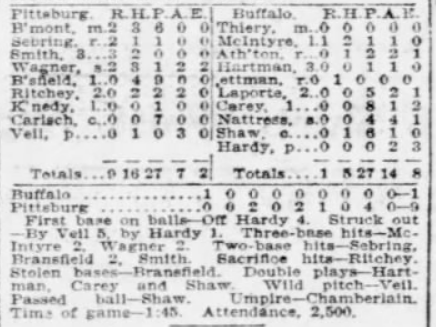 John Dreker
On June 22, 1970, The Pittsburgh Pirates took on the St Louis Cardinals in a doubleheader at Forbes Field. The…

John Dreker
The Pittsburgh Pirates were at Wrigley Field on Tuesday June 22, 1976 to take on the Chicago Cubs in an…

John Dreker
On May 24, 1922, the Pittsburgh Pirates were hosting the Philadelphia Phillies at Forbes Field. The two teams were playing…