Today’s Card of the Day is a first from a great pre-WWI set that we haven’t covered here yet. I chose right-handed pitcher Bob Harmon for the article because he was born on this date in 1887. You can read more about him in today’s This Date in Pittsburgh Pirates History article. Harmon played for the 1914-16 and 1918 Pirates. He was a contract hold out during the 1917 season, which would have been shortly after today’s Card of the Day was put out. Here’s the 1916 Sporting News Bob Harmon, which has the catalog number M101-4, with the 101-4 being a random number assigned to the set in later years, while the “M” stands for magazine issued sets. 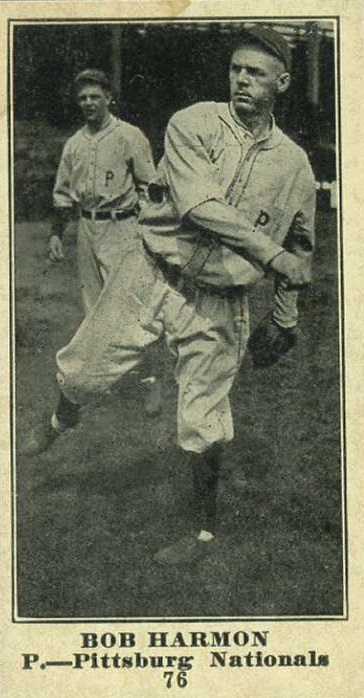 As you can see, Harmon is shown here in a throwing motion, looking like he’s warming up on the sidelines. An unidentified teammate looks on in the background. This card front is quite similar to the M101-4 card of fellow Pirates right-handed pitcher Al Mamaux, who is in the same follow-through pitching pose, but there are two of his teammates in the background of his card. You can also see that Pittsburgh is spelled without the H on the front. It was a confusing time for card manufacturers back then, who flipped between spellings of the city name. The “Nationals” designation just stands for the league and not a team name. That was good to have for St Louis, New York, Chicago, Philadelphia and Boston, because they all had two teams in the majors at that time, one in each league. The number “76” is the card number for Harmon in the 200-card set.

The back on this particular card show above is blank, but here’s an example of the Sporting News advertisement back 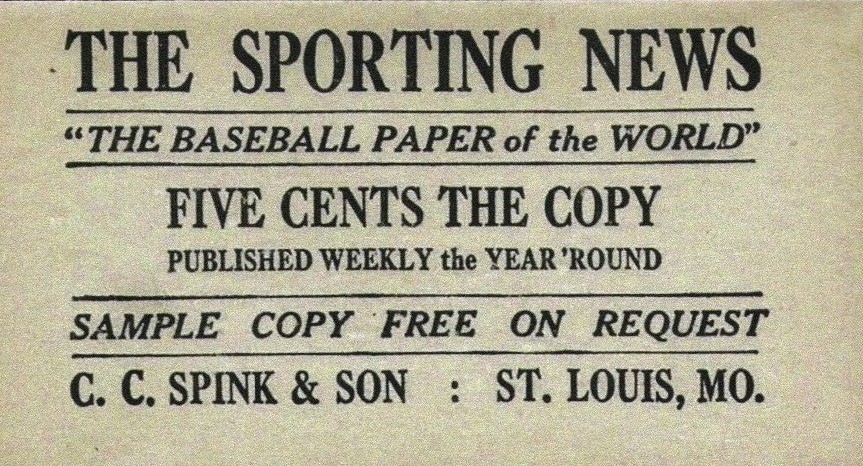 There are also other backs that can be found in the set and they were other companies that distributed the cards. The back were designed specifically as advertisements that would be on something collectible, though cards were mostly popular with young kids, so it didn’t exactly work out well for all of the companies. One example that did work well for kids was the Gimbel’s Department Store back, which is a company kept alive in the minds of everyone thanks to the movie Miracle on 34th Street, though the actual business no longer exists.

These cards aren’t extremely rare, but if you’re looking for a specific ad back on a specific player, then that will drive the price up. What I would suggest, if you like the card, but don’t want to spend a lot of money, is to get the reprint set. There are ten Pirates in the set, including Hall of Famers Max Carey and Honus Wagner, as well as 1909 World Series hero Babe Adams. If you want the real thing, then it’s best to not be picky about the back. There’s a blank back Harmon available for $80 delivered in and SGC 40, which is the equivalent of a PSA 3 (very good condition).  Or you can go two grades higher for just over $100 and get the Famous and Barr ad back. That’s the better deal, but that’s still a fairly expensive common card from the set.