Today’s Card of the Day is a new offering that caught my eye recently. With today being Al Oliver’s birthday, it seems like the appropriate day to share the card. It’s from the 2020 Topps Archives set, a series called Snapshots, which features an autographed Al Oliver card.

I could have went for any one of numerous choices for Oliver in this set, and not just this particular pose. He has all different poses/teams available in the signature series, including a replica (sort of) of his rookie card. In 1969, Oliver was on a two-player rookie card with Richie Hebner, but the 2020 Topps card just features Oliver’s side of the card. I went with this particular one because it’s a new photo from Topps and I like the autograph on the base card. More on the other variations below. 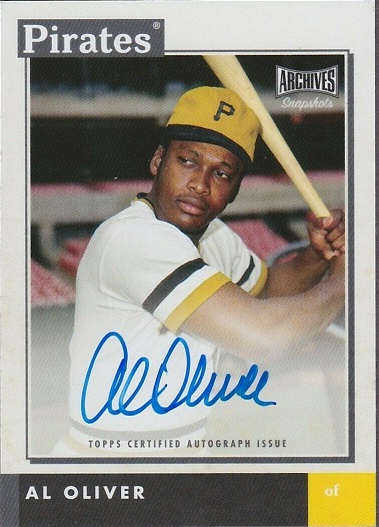 As you can see, he’s in a posed batting photo, looking off to the side. Basically, a typical go to photo for baseball cards. Oliver has a terrific autograph, unlike many of the newer players who scribble something that sort of looks like a few letters in their name. You can see the “Topps certified autograph issue” written under his name. That’s actually important to note because he has a base card in the set that is basically the same thing without an autograph. That card doesn’t have the lighter bottom part of the photo either. Under the Archives logo in the top right corner, you can see the snapshots designation for this particular series. 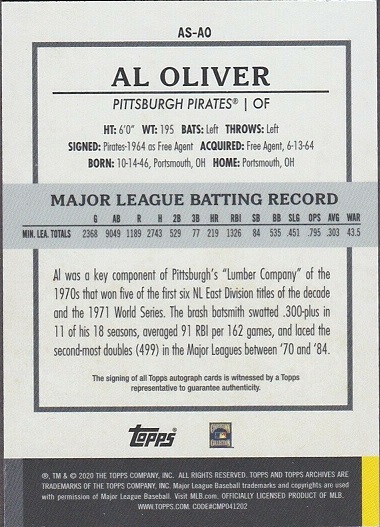 The back has a brief bio, along with his career stats. Under the bio, it notes that “The signing of all Topps autograph cards is witnessed by a Topps representative to guarantee authenticity”.

I mentioned that I had numerous choices here, just with this particular pose. I went with the one I like the best. However, that’s not the best one as far as value. Besides the base card and the autograph version you see above, he also has a blue parallel card numbered to 50 and a gold parallel numbered to ten. Both of those versions come with or without the autograph. There’s also a version called a black & white snapshot, which is the same photo, just in black & white. That as well comes with or without an autograph. Finally, there is a 1/1 black parallel version. If you pull that from a pack for anyone, it’s worth money, but the more collectible players will get you a huge return on your investment. All of the cards are tougher to find than the base version, but the real value comes with the autographed parallel cards. The tougher it is to find, the more value it adds.

So what are we talking about here with money? Ebay has most of the cards listed above. Here are the lowest prices of those listings for each version, noting that some people ask a ridiculous amount that they will never get, even if they’re the only person selling that particular version. Prices include the shipping charges:

Black and white: $4 (no autographs are currently available for this version, but some have sold in the $12-$15 range)