Today’s Card of the Day is from a 1964 Topps product called Topps Giants, which you might suspect with this being a Pittsburgh Pirates site, that it means that the cards were bigger than normal and not that all of the cards were San Francisco Giants. We are featuring Bob Bailey today, who was born on this date in 1942, and played for the 1962-66 Pittsburgh Pirates. He reached double digits in homers for four straight seasons with the Pirates before they traded him away during the 1966-67 off-season for the great Maury Wills. Bailey would go on to have some big seasons at the plate later in his career with the Montreal Expos. He played 1,931 big league games over a 17-year career.

The 60-card Topps Giants set also includes fellow Pirates Roberto Clemente and Bob Friend, as well as a strong group of Hall of Fame players. At 3 1/8″ by 5 1/4″ in size, they are much bigger than the standard card size (2-1/2” x 3-1/2”) from that era. They were released in large numbers, so they are relatively easy to find today, which keeps the price down and makes it a set that collectors can put together affordably. 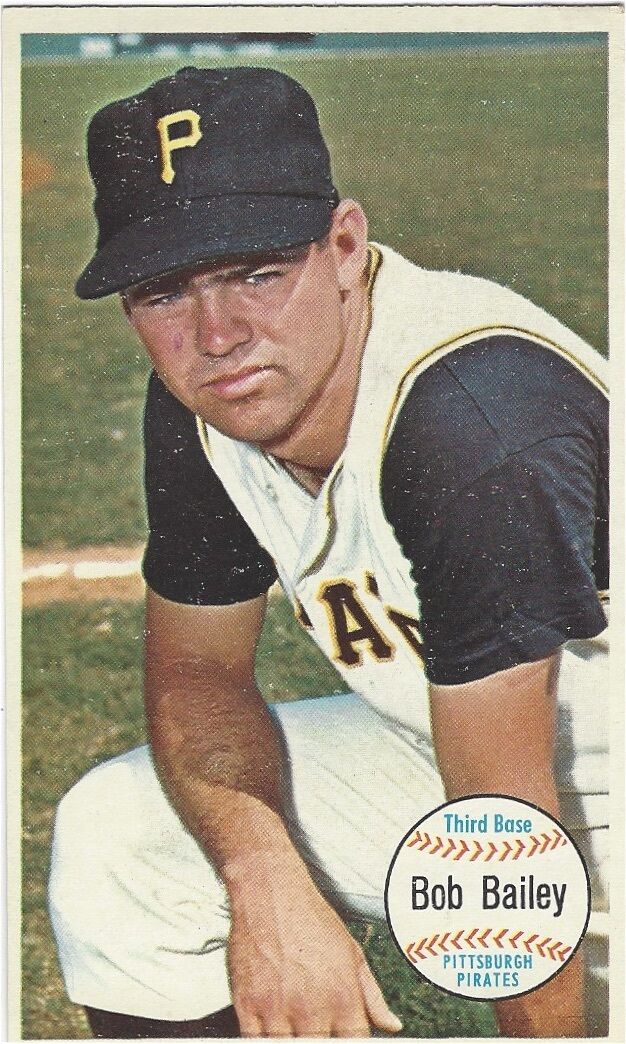 As you can see, there aren’t many bells and whistles here. This is just a large photo of the player, with a baseball in the bottom corner that has the position, name and team name. The white border around the card is very small, so each player got a great posed photo shot on a big card 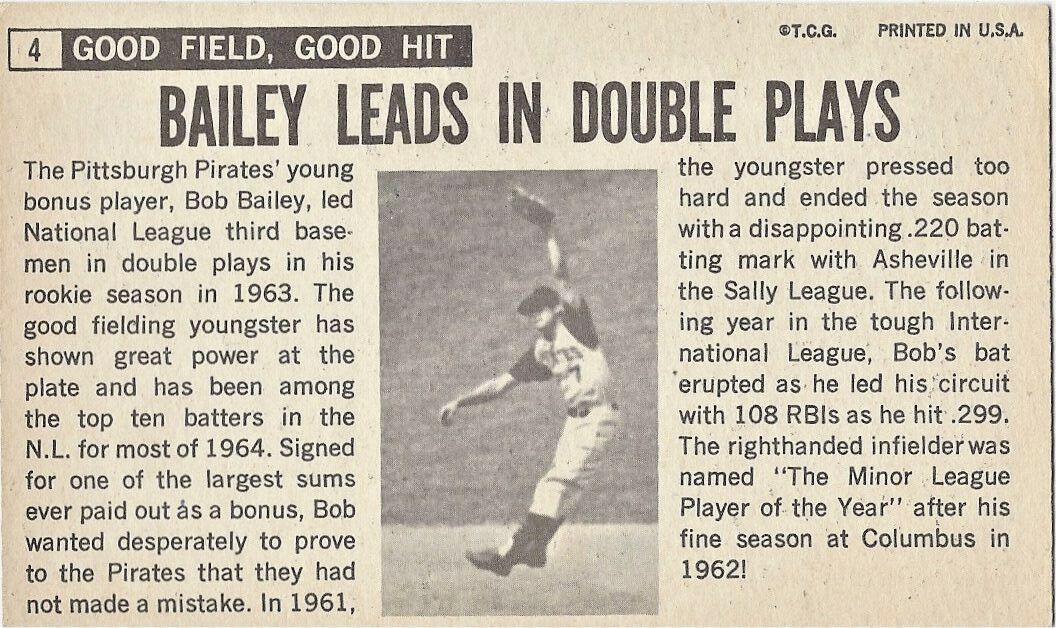 The back is set up like a newspaper and includes a great little black & white action shot, plus a nice bio of his time with the Pirates up to that point. As you can guess from the wording about his hitting in 1964, these cards were written up during the 1964 season. So it’s a much later release than the regular Topps issue, which was out well before Spring Training. It mentions up top that he was a “good field, good hit” player. Bailey’s best defensive season (according to dWAR) was his first full year in the majors, when he put up a 1.1 dWAR. He peaked at 20 years old in that part of his game, though the bat more than made up for it. Bailey finished his career with -3.3 dWAR, but he had a 28.8 WAR overall.

The back also mentions that Bailey received a large bonus to sign. He graduated high school on June 15, 1961 and the Pirates reportedly had him signed one minute after he was eligible to sign. They had to outbid every other interested team and it proved to be an expensive decision, costing them somewhere between $125,000 and $175,000. He went right from high school to Low-A ball and played 75 games that season. At 19 years old, he was pushed to Triple-A, and had a great season. Besides the .299 average and 108 RBIs mentioned above, he had 31 doubles, 28 homers, 109 runs scored and 96 walks. He never came come to replicating those numbers in Pittsburgh, but he did have a higher OPS during the 1970 season in Montreal, albeit in fewer games, so the counting stats don’t come close to matching his one and only full season in the minors.

This set is relatively inexpensive, especially for its age. The Bailey card is a common in the set and can be found for $3-$5 delivered, with many options available on Ebay in that price range. You can buy a high grade copy for a reasonable price, with a PSA 8 current available for $24 delivered. That’s not even a great price, because there have been two auctions recently that ended for about $11 each, that were both graded PSA 8. So a bit of patience might pay off if you want that high grade copy. I’d personally go ungraded over the Buy it Now options if you don’t feel like waiting.