Howard Chasser has already shared two great baseball cards of Roberto Clemente with us. The first was the rookie card of the Great One, which had a very interesting story behind his acquisition the card. The second one was the very rare 1958 Kahn’s card. Today he shares two great pieces of Clemente memorabilia from a tribute game played by the Pittsburgh Pirates in Puerto Rico after Clemente passed away tragically on New Year’s Eve in 1972. The second item comes with an added bonus, a signed statement from Vera Clemente verifying the authenticity of the item. One item here is unique because of the autographs, while the other isn’t unique, but it’s nearly impossible to find.

A little more than a year after Roberto Clemente died tragically in a plane crash, the Pittsburgh Pirates sponsored Major League Exhibition games to be held at Hiram Bithorn Stadium (the home of Clemente’s winter league team the Santurce Cangrejeros) in Puerto Rico as a tribute to the late Clemente.  The first ones were held on March 18 and 19, 1974 including a game with the Pirates facing off against the Montreal Expos.  There are two memorabilia items related to this game that I am aware of.  They are both incredibly scarce.

The first is one I acquired many years ago – it is a ticket to the game.  The ticket is silver and features a photo of Clemente.  I don’t recall seeing another one since.

The second I acquired many years later as part of the Clemente family estate auction and is unique in a way I will share.  It is a program to the game between the Pirates and Expos.  The program features a great image of Clemente on the cover.  This example has 23 signatures including 18 players and the team doctor Joseph Finegold – most meaningful to me is it is inscribed “To Vera”.  I imagine each of the players having Clemente in mind as they signed the program knowing it was to be presented as a keepsake, memorial and tribute of Roberto for Vera.  It is one of the few items in my collection that evokes a visceral reaction each time I hold or look at it.  I have only seen other examples of the program offed a handful of times over many years. 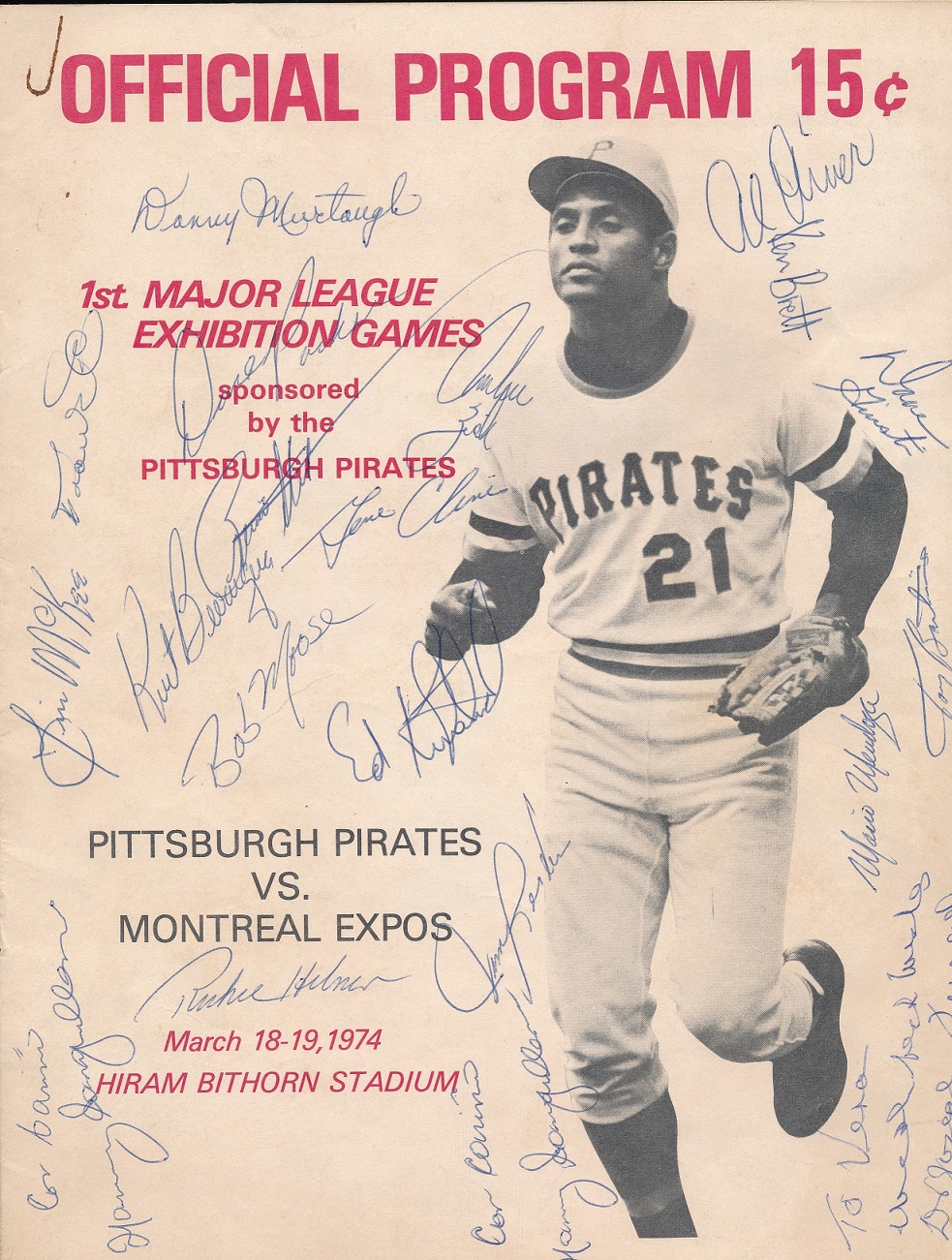 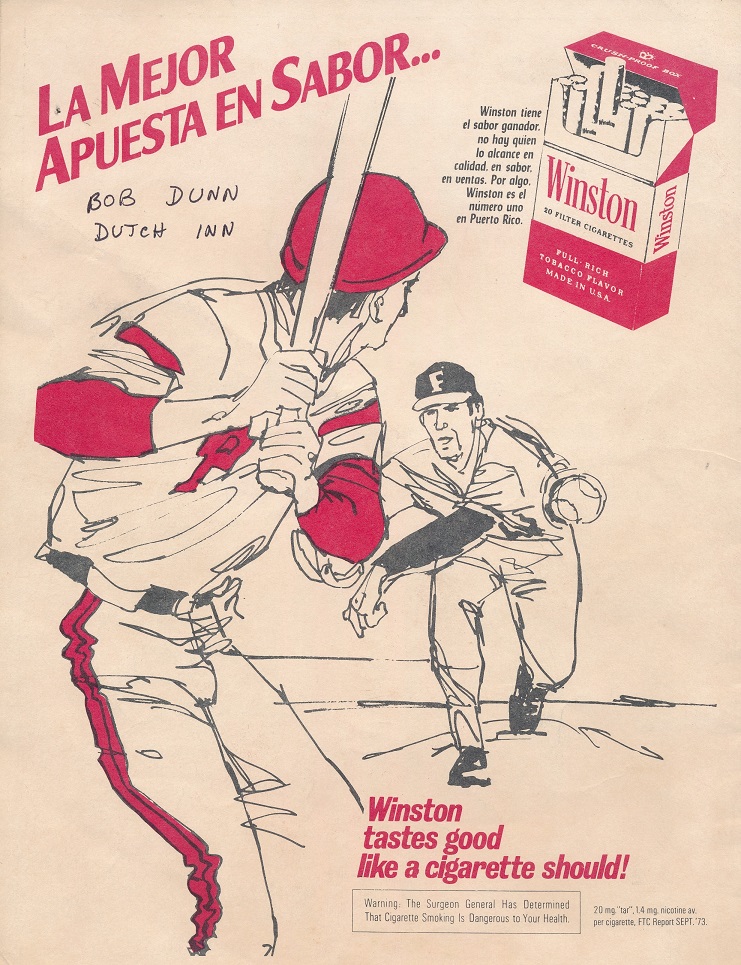 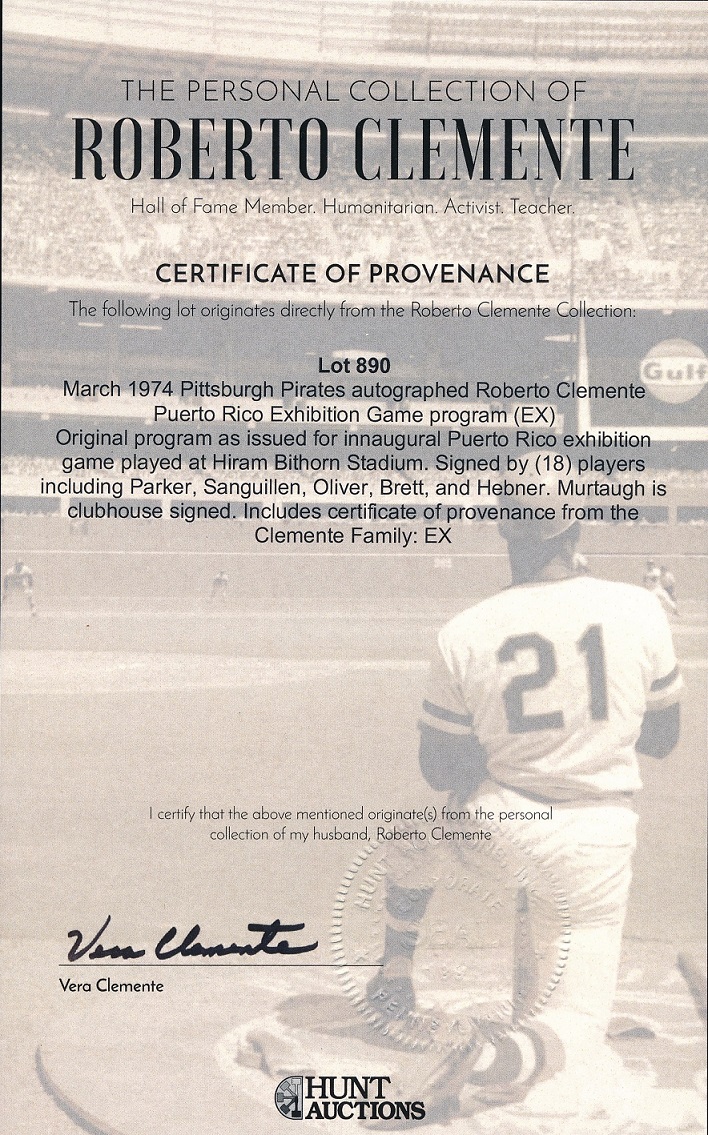