Today’s Card of the Day features one of the best Pittsburgh Pirates ever, as he celebrates his 34th birthday. This card of Andrew McCutchen comes from the 2018 Topps set and it’s a special insert card to commemorate the 35th anniversary of the 1983 set. Topps used the 1983 Topps front/back design and added current photos of active players, inserting them alongside their regular base set cards. It was included in series one of the 2018 Topps set. McCutchen played for the Pirates from 2009 until 2017 and this card ended up being his last Topps card before he was traded to the San Francisco Giants. In fact, the 2018 set later included an updated version showing him with the Giants, and that card also used the 1983 front design. 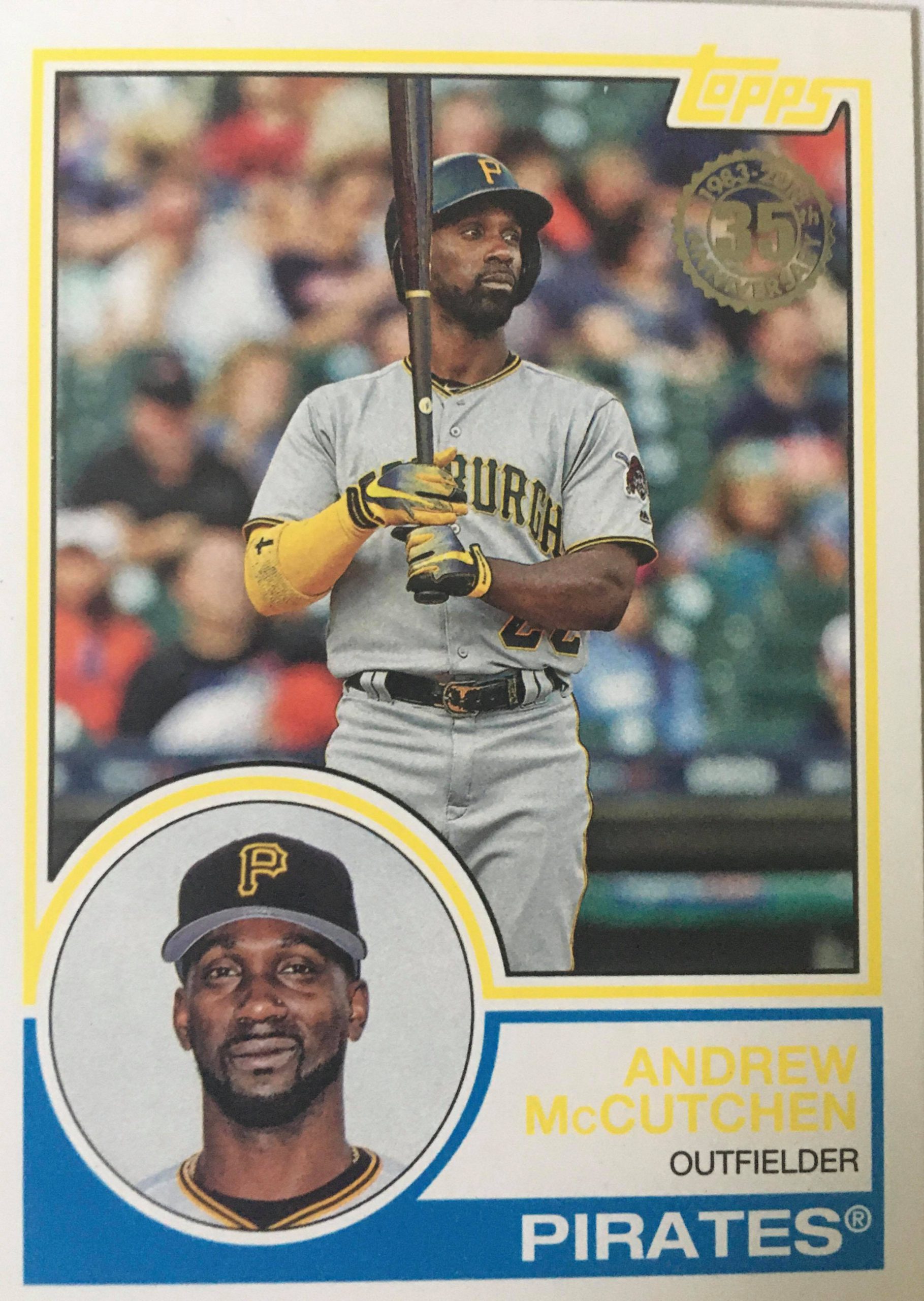 While it doesn’t rank as one of my top ten favorite designs, I do really like the 1983 Topps layout on front. About the only flaw here is the yellow on white lettering for his name, making it a bit difficult to read, especially on the card that’s smaller than the scan above. You get two photos of the player, with the main photo usually being an action shot, or simulated action. The border colors for 1983 were different for each team and they matched up to the team colors…except the Pirates had blue for some reason at the bottom. I still liked the look, it was just an odd choice.

If you look in the top left hand corner, Topps included a little logo telling you that this card celebrated the 35th anniversary of the 1983 set. The regular base cards from the 2018 set looked much different. They have a completely different design with a more modern feel. The 35th anniversary cards were inserts in packs of the series one run and are tougher to find than the base cards, but this isn’t a rare card. 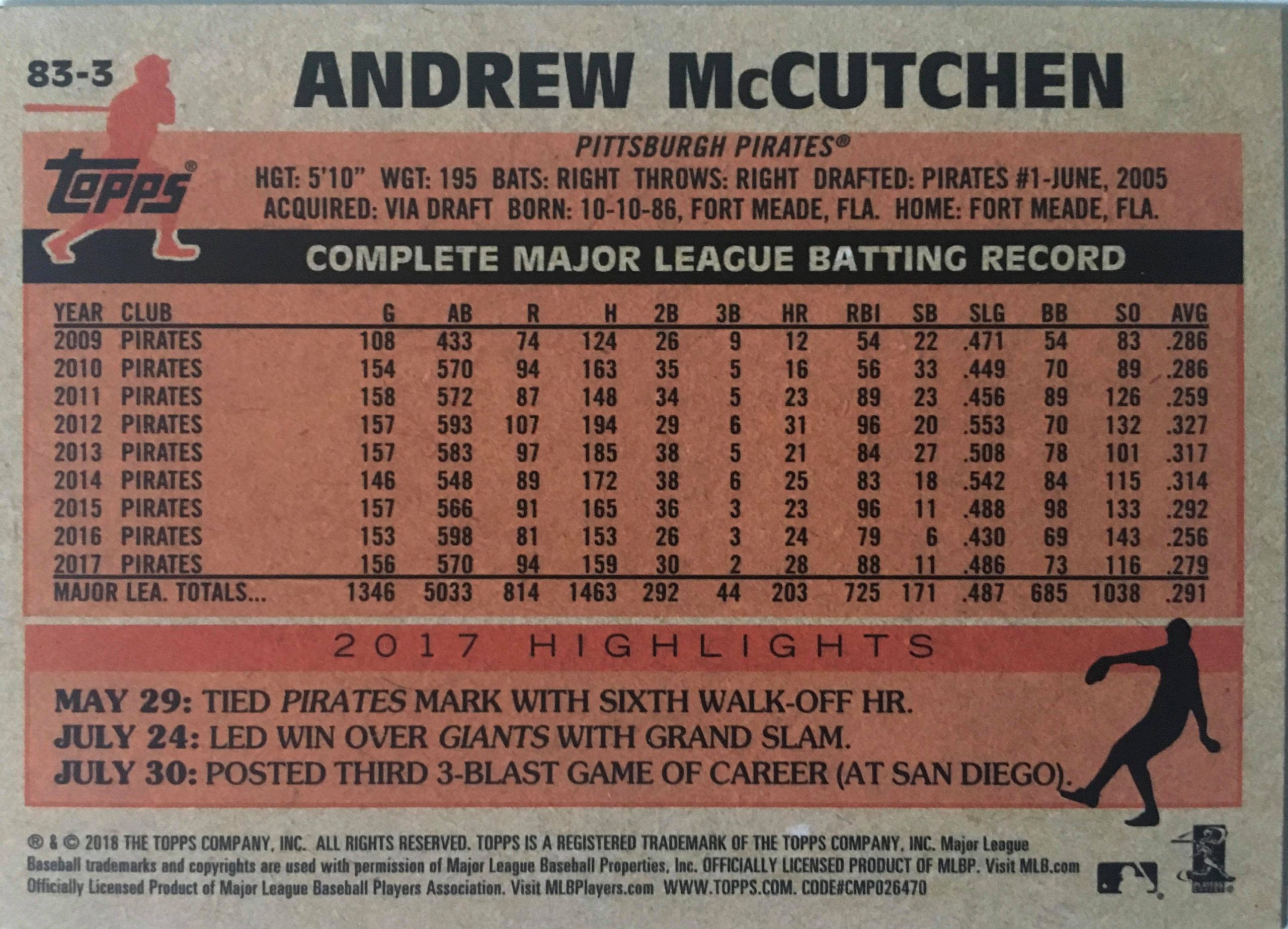 If you read yesterday’s article on Starling Marte, you will remember that I mentioned about how tough it was to read the back of the card because the background was dark green and the lettering/numbers were light black, just like Topps had in 1976. I actually recommended not reading the stats. This card is the exact opposite when it comes to reading the stats.  You can check out everything that McCutchen accomplished through his 2017 season on this card, along with three highlights from that 2017 season. The 1983 Topps set was eye-friendly, though a player with a long career had all of his stats listed, so the print could get small.

What I really like here is that this card has his entire Pittsburgh Pirates career and nothing else. You really get a good feel of the impact he had with the Pirates, and how he was immediately a strong player, but really stepped it up a notch during his best years. I never realized, mostly because it’s not a stat often discussed now compared to the past, but I was surprised to see that he never broke 100 RBIs in a season. You have a guy playing every day, with 30+ doubles and 20+ homers every season, three years in a row on playoff teams, and you would assume that he had one 100 RBI season mixed in.

This card is easy to find on Ebay and you can usually get it for about $3 total, including shipping. You’ll find some listed higher (usually the shipping gets you), but two have ended recently for a little less, so you can just search out the best price and add this inexpensive beauty to your collection.