Today’s Card of the Day comes from a player celebrating his birthday today. It also comes from a set that utilizes my favorite design of current cards. The 2015 Topps Archives card featuring Starling Marte, shows the former Pittsburgh Pirates outfielder on a card that has the same design that Topps used in 1976. The 26-year-old Marte was just starting his third full season when this set came out. He hit .287 with 19 homers in 2015, while picking up his first Gold Glove award. He would go on to make the All-Star team in 2016 and win his second Gold Glove.  He turns 32 years old today.

The Topps Archive sets featured a mix of card designs from Topps over the years, plus they threw in new cards that never existed for former players. For example, they included Bill Mazeroski and Willie Stargell in the set. Mazeroski is pictured on a card that has a 1983 Topps design. Stargell’s card is set on a 1957 Topps design. The current players also had different years. Marte is 1976, but Gregory Polanco was a 1983 design. When you were opening up backs of 2015 Archives, you were seeing a selection of Topps designs over the years, and it wasn’t all regular base sets either. Andrew McCutchen is in the set on the 1968 Topps Game Card set, which looks like a pack of playing cards, but it features a game outcome, such as a single, double play, walk, etc. So they really mixed things up by bringing back the old sets, with high quality photos, using new and old stars. 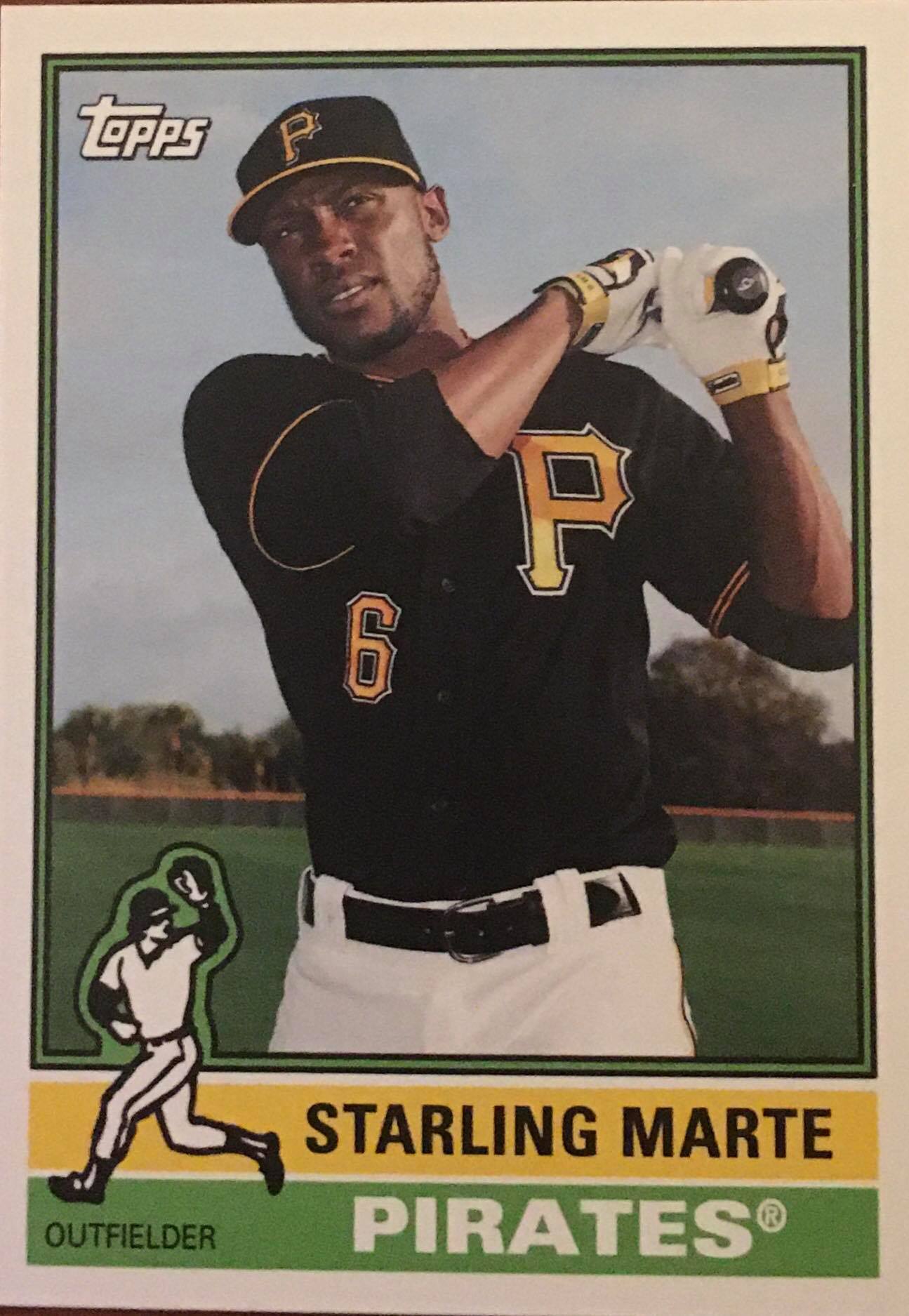 Marte is shown here on the typical color front for the Pirates in 1976. All of the Pittsburgh players had yellow and green for the border colors, player name’s in black, team name in white, position off to the side with a picture that matches their position. Each of the infielders had different characters on the front, while the pitchers matched up with the hand the player threw with, and the catchers all had a squatting catcher pose.

Each base card in the set had a card called a parallel, which had the same photo/design, but the borders were a different color. The silver parallel is the most common and they were individually numbed 1-199. The gold ones are tougher to find (numbered to 50), while the black parallel was a 1/1 for each player. 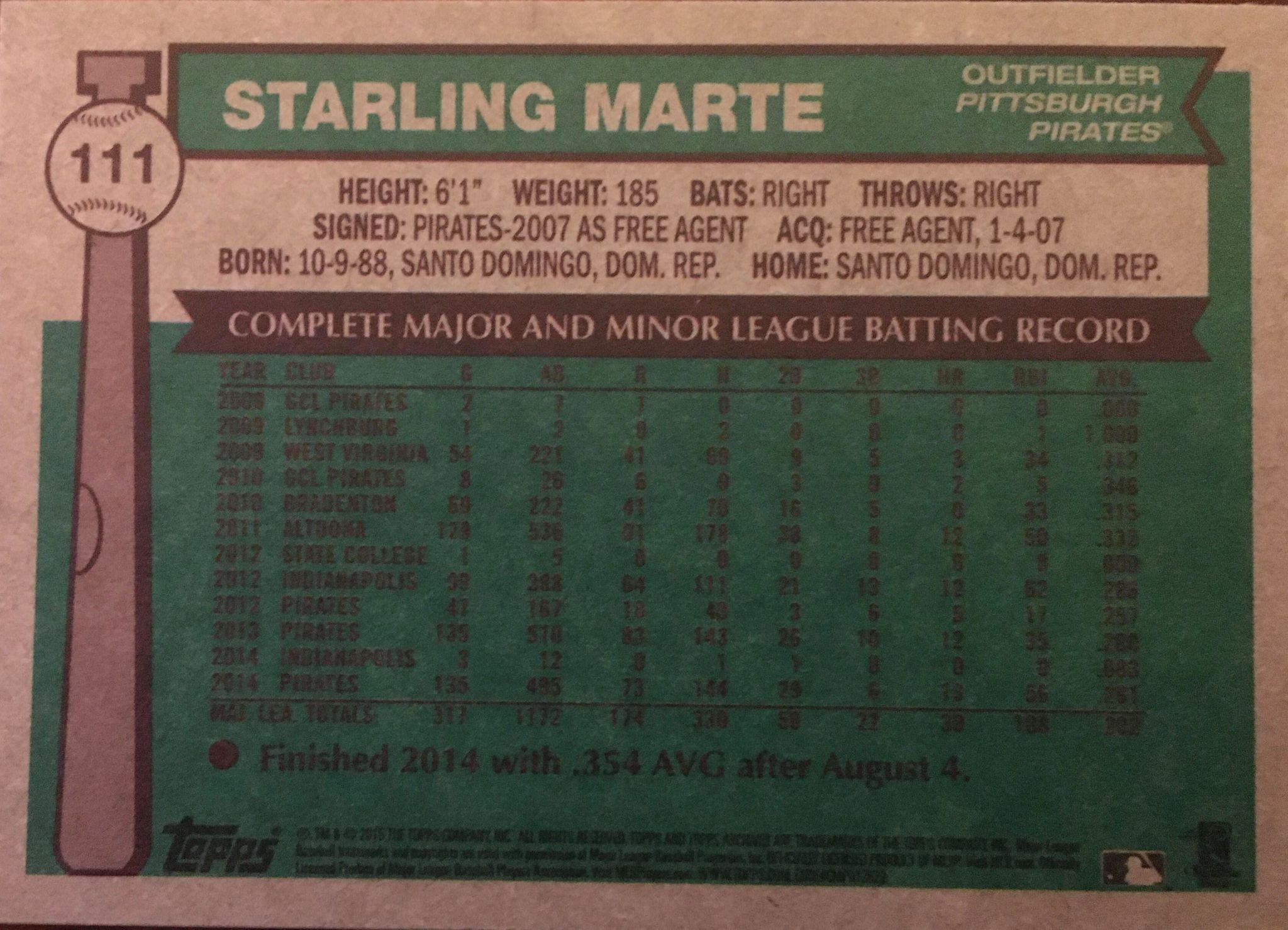 As much as I love the front of the cards from this set, I hate the back of the cards. They didn’t change anything from 1976 and that’s the problem.  The letters/numbers are light black, the background is dark green, the print is small. The bio section at the top is fine, but the stats section is a disaster now, just like it was back then.

Topps likely had a secret deal with eye doctors at this time because these cards were nearly impossible to read without doing some long-term damage to the peepers. So when the replicated the set, they could have made a subtle change to make it easier to read now. They didn’t. That’s not a poor quality scan you’re looking at up top, that’s what they really put out there in small print for people to try to decipher. Stop trying to read the stats, just go to Baseball-Reference and look them up. Luckily, as I mentioned up top, only some of the cards from the set came with the 1976 design, so not all of the back were as useless as this one.

This card can be found for $2-$3 on Ebay for the base card. If you are looking for one of the silver parallel cards, you will pay slightly more. The gold parallel cards obviously sell for more and the one black parallel’s price is up to the person who owns it. I used my own card for the photos above and I just wanted an example that looks like the old set, so I went for the base card.