Today’s Card of the Day features the man born 103 years ago today, Danny Murtaugh. He was a great manager for 15 seasons in Pittsburgh, but before that he was a player, spending the final four years of his nine-year career playing for the Pirates. He also spent two years away from baseball serving during WWII. Murtaugh would be described as a solid player, who provided decent defense and added some hitting. He was never a star, though this 1948 Leaf card shows him at the peak of his playing career. He hit .290 in 146 games, with 71 RBIs, while leading all NL second basemen in assists, putouts and double plays. That performance earned him a ninth place finish in the NL MVP voting. So today we look at the 1948 Leaf Danny Murtaugh, which has a back that provides clues to some highlights of his best season in the majors. 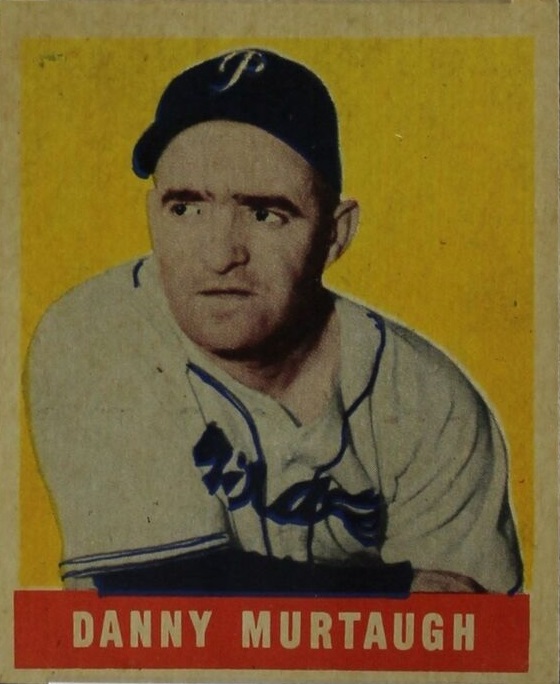 The strange thing about Murtaugh is that he looked like an old grizzled manager when he was a player. It’s like he was born into the role he eventually excelled at, but it took some time to actually get to that role. He’s 30 years old in that photo, but without knowing the date of the set, most would probably guess it was put out in the mid-60s (ignoring the uniform colors of course). 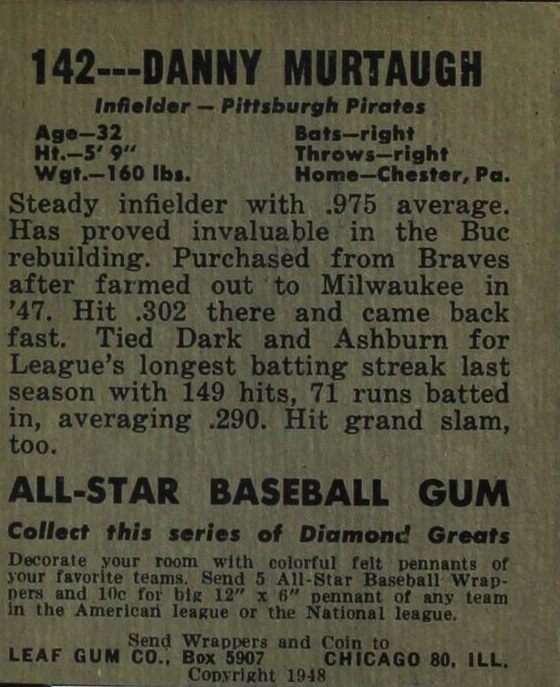 The first line on the back can be a bit confusing here, though you probably figured it out after the initial confusion wore off. Murtaugh had a .975 fielding percentage. This whole back reads like someone took quick notes about him, before decided what to actually write, and mistakenly sent off the notes to the editor. They mention the last names of two players who had the same length hitting streak, but don’t mention how long the streak was, though it sounded like they were going to mention it. They also threw in a random grand slam mention with no context as to when it happened.

The hitting streak was 23 games and actually has an odd twist to it. Murtaugh started the streak on August 15th (1948) during the second game of a doubleheader. It ended on September 6th during the first game of a doubleheader. It was then extended it on September 21st. How is that possible you ask? The August 25th game was suspended in the ninth inning due to a protest. They finished the game on September 21st and the stats became official. As for the grand slam, it has an interesting story too. Murtaugh hit a walk-off grand slam in the eighth inning, with the game called due to the local Sunday curfew. The Pirates were down by three runs when he put a 2-2 pitch over the outfield wall at Forbes Field.

This is a great card, despite the low quality of writing on the back. There was some good stories behind the facts that they posted. It’s also a tough card to find because it was short-printed compared to the print run of some other cards in the set. If you want a Murtaugh, it’s going to cost you over $100, unless you can find an ungraded one in low condition. All of the ones for sale right now on Ebay are graded  and the lowest price is $445 for a PSA 3. That’s a high price for that grade (should be half that amount at the most), so a bit of patience will serve you well if you’re looking for one to add to your collection.