Today’s Card of the Day is a Pittsburgh Pirates Rookie Stars card from the 1971 Topps set. It features pitcher Fred Cambria and outfielder Gene Clines, who turns 74 today. This is one of two Rookie Stars cards for the Pirates in the 1971 set. The other features catcher Milt May and pitcher Ed Acosta. I’m sure we will feature that card here in the future, but for now, we take a look at the rookie card for the man celebrating a birthday today. 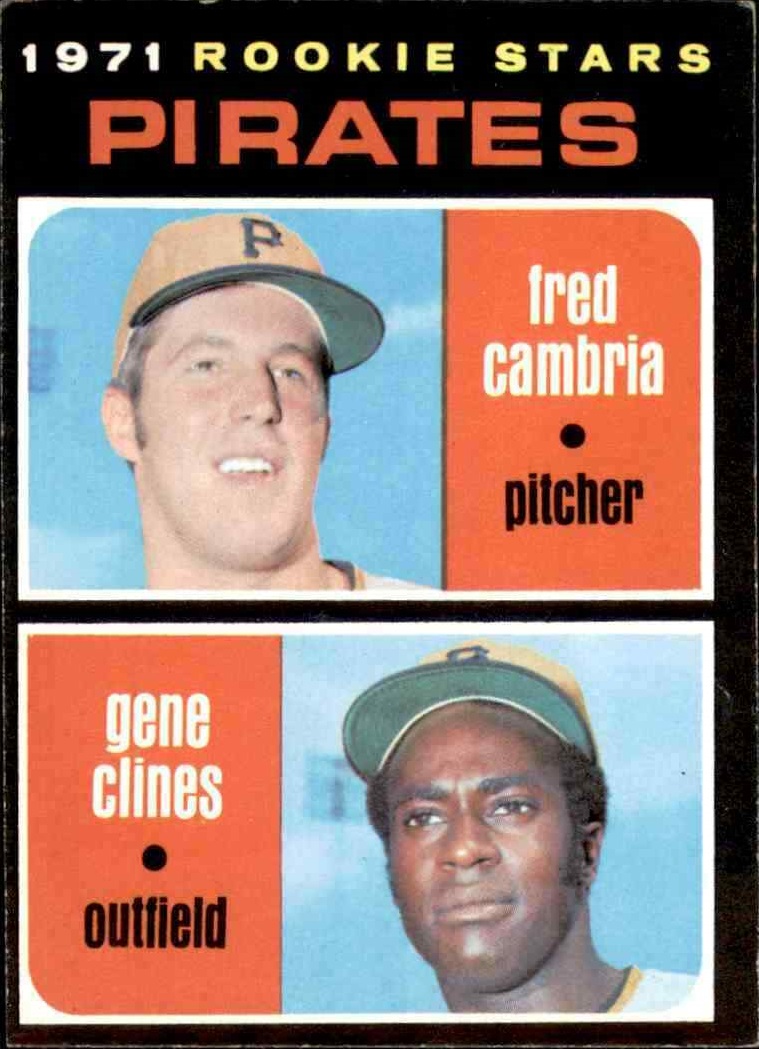 There’s a slight difference between this card and the other Rookie Stars card for the Pirates. All 1971 Topps have the black borders, which made it a condition sensitive set. The “1971” is always in white letters, the “rookie stars” is always in yellow letters, while all of the names for every team (24 at the time) are always in red. That’s consistent on all of the team rookie cards. However, the boxes for the positions/names next to the players had two variations. This card got the red box/white lettering (player names) version, while May and Acosta got the yellow box/red lettering version.  All of the names and positions were written in lower case letters. The set also had American League and National League Rookie Stars cards with three players on each card. 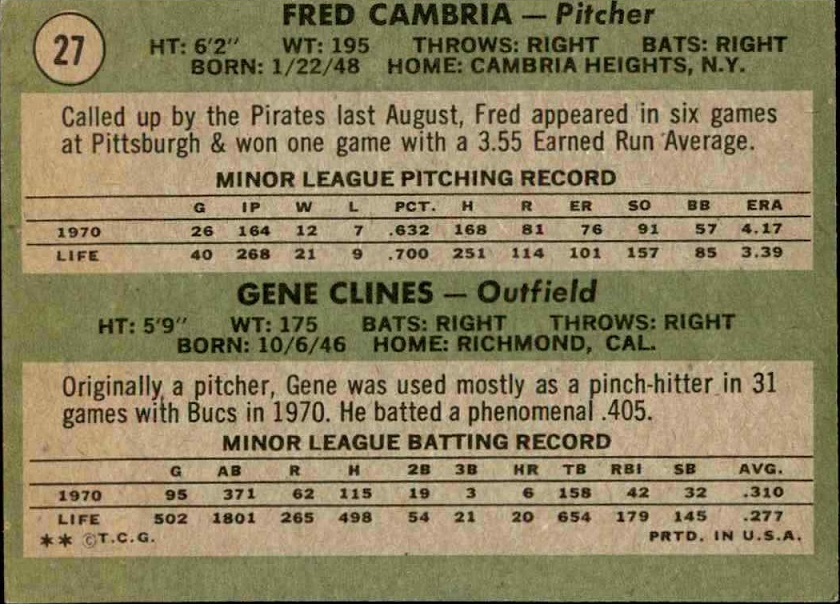 As you can see on the back, it shows the minor league batting records for Clines and the pitching records for Cambria, while noting that both of them saw some big league time in 1970. Clines was just short of his 24th birthday at the time, while Cambria, who lived in Cambria Heights, NY, was 22 years old.

Clines obviously had some success in his big league debut as a bench player by hitting .405 in 31 games. He also did well in the minors that year in 95 games for Double-A Waterbury of the Eastern League. Clines never returned to the minors, so he never actually played in Triple-A. The 1970 big league experience was great for him, because it led to a bigger role on the 1971 World Series champs. He batted .308 in 97 games that year, while stealing 15 bases and scoring 54 runs. Clines spent the first five years of his ten-year career with the Pirates.

Cambria seemed like he could be a long-term piece for the Pirates as well. He shot through the minors after they drafted him in the third round in 1969 out of St Leo University. A month after being drafted, he threw a perfect game in Double-A. The Pirates gave him five late season starts in 1970 and he put up solid stats, especially for a 22-year-old with a year of pro experience. The Pirates moved him straight to Triple-A during his first full season in pro ball. Playing for Columbus, he went 12-7, 4.17 in 164 innings. He was with the Pirates late in Spring Training in 1971, but was sent to the minors, where he lasted just seven starts. Moved to relief in 1972, he ended up pitching just 56 more innings over two seasons before retiring. He suffered a shoulder injury early in 1971 and it sidetracked his career, so he never made it back to the majors. He blamed the injury partially on throwing well over 200 innings in 1970 (he also played winter ball), plus the Pirates changed his delivery.

This card is basically a common from the 1971 set, though being the rookie card of Clines, it has a bit of extra interest. It’s easy to find though. You can get it for about $3 total in average condition (I actually bought one for $1.98 total in the middle of writing up this article). The 1971 cards are tougher in high grade, so graded examples will run a bit more for top grades. Ebay has two completed sales for PSA 8 examples. They ended for $43 and $55 each. There are also numerous signed versions available, some of them signed by both players, though it’s easier to find ones just signed by Clines.