Today’s article is another guest submission. This one coming from Kevin Cummings, who has already given us his article on the 1887 Old Judge Sam Barkley card, as well as a Pirates Memorabilia post on a Pepsin pin of Jot Goar. We go back to the Old Judge set for a special treat today. Kevin talks about a player who is pictured on a card in the 1889 Pittsburgh uniform, but didn’t actually play a regular season game for the team.

The Old Judge set in my opinion is the best baseball set ever made. It provides pictures of numerous MLB players who would otherwise have no known photos. It was produced over five years, with a very large majority of the cards being produced during the 1887-89 time frame. A small number of cards were produced in 1886, while the 1890 cards provided only team changes (no new photos) and are extremely rare. In all, there are over 2,500 photos used in the set between the 524 subjects in the set. This particular card was produced in 1889 and features shortstop Bob Allen. Here’s the front scan (the back is blank), following by the write-up from Mr Cummings: 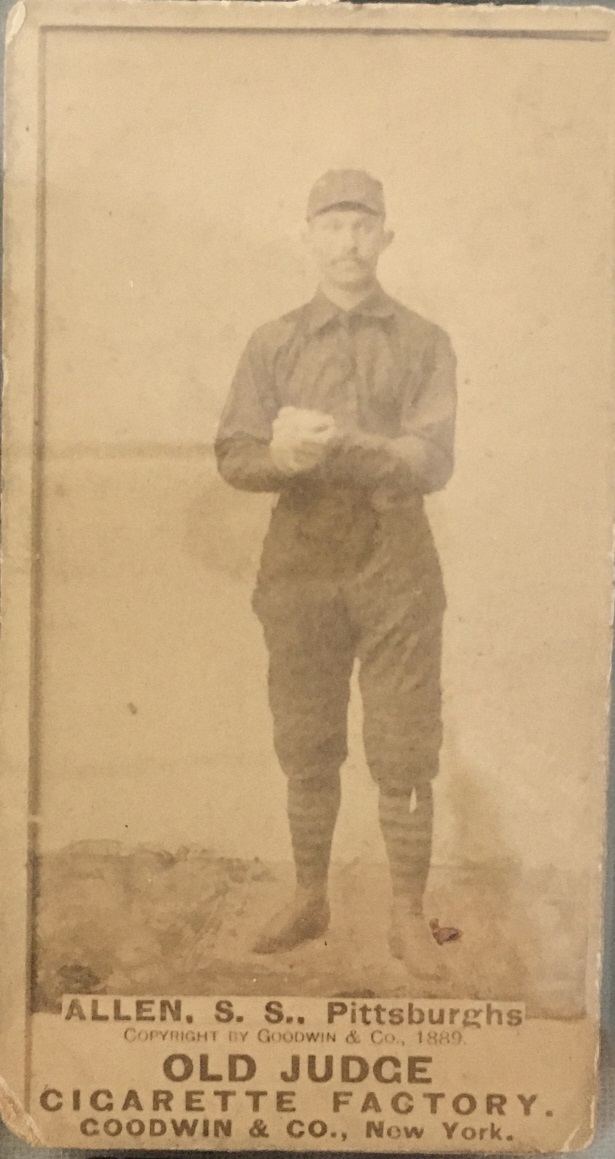 Robert Gilman Allen was born in Marion, Ohio, on July 10, 1867. His father ran a bank in Marion and Bob began working for him right out of high school. In the 1880s, Central Ohio, where Marion is located, had teams in almost every town. Marion had a town team and starting in 1885 there was also an independent team known as the Mohawks. Allen’s older brother Herbert played baseball and that, most likely, coaxed Bob into the sport. The both of them played for the Mowhawks in 1885 and 1886 – Bob at second base and Herbert in the outfield. The few mentions of the team in the local papers in those years seem to indicate, however, it was not very successful.

Allen’s professional career began in 1887 with Mansfield in the Ohio State League, where he shared the field with and befriended a fellow teen-ager – future Hall of Famer Ed Delahanty. Bob returned to a drastically reconfigured Mansfield team in 1888. Although he started out very hot with the bat, he dipped seriously from mid-May onwards. On the second Friday of July – aptly Friday the 13th – Allen collided with a Sandusky fielder and broke his leg. Allen was done for the season. Despite the injury, the major league Pittsburgh team liked what they heard and saw of him and signed him for 1889.

The February 20, 1889 issue of Sporting Life spoke of Allen as Pittsburgh’s “new shortstop” and mentioned that the Pittsburgh press was already referring to him as a “phenomenon,” which Allen greatly disliked. Allen had some heath issues at that time, which slowed his progress. Despite manger Horace Phillips’ previous quote to the contrary, on April 27 Allen was among several players released. The team didn’t think he could properly train on his own as they were away on a road trip. His good fielding and weak hitting were also noted. Despite his dismissal, he actually was on Pittsburgh’s Opening Day roster and is shown in the Old Judge baseball card set as a Pittsburgh player, though he never appeared in a regular season game for them.

After his release, Allen made his way west to Davenport, Iowa, where he joined the Hawkeyes of the Central Interstate League. His shortstop play impressed fans and writers, but his bat still left a lot to be desired. He hit a paltry .207. Allen’s fielding alone, though, was enough to catch the attention of Harry Wright, manager of the Philadelphia Phillies. Philadelphia’s shortstop’s play during the 1889 season left a lot to be desired, so Wright wasted no time in signing the sure-handed Allen for 1890. He did not disappoint his new boss.

Allen became a key cog in the Phillies’ league-leading infield defense from 1890 through 1893. The write-up of Allen’s early-season effort against the Brooklyn Bridegrooms in the April 29 Brooklyn Daily Eagle contained three separate mentions of his fielding prowess and he ended up with five assists and a putout on the day. Allen’s 1890 – 1892 seasons were remarkably similar. His hitting averaged just .225 with occasional power, but his fielding percentage and range factor were far above those of other league players each year. In 1893, the pitcher’s mound was moved to its present distance from home plate. Like many batters, his average rose as a result – up 40+ points to .268. His stellar fielding, however, never wavered. He was just 25 years old and in the prime of his career.

The following season looked very promising for the Phillies. Their lineup was stacked with future Hall of Famers (Sam Thompson, Billy Hamilton, and Allen’s old Mansfield teammate, Ed Delahanty), but the injury bug bit Philadelphia hard. Allen managed to avoid issues for the first 41 games. Then on June 15, in the ninth inning of a 21 – 8 blow-out contest against Cincinnati, the Reds’ pitcher, Elton “Icebox” Chamberlain, hit Allen in the face with a pitch, fracturing his cheekbone and eye socket. It ended Allen’s season and for all intents and purposes, his playing career. He was immediately hospitalized. Initially, there were fears that he might die or be left blind. Thankfully, after some surgery to save his eyesight, he pulled through and returned to his parents’ home in Marion to recuperate. The injury would heal, but according to an August 12 article in the Philadelphia Inquirer, Allen was concerned that the memory of the beaning would affect his confidence as a hitter. Once the headaches disappeared, Allen went to work in his father’s bank in Paulding, Ohio rather than return to baseball. Teams made offers to him in 1895 and 1896, but he did not accept any of them.

Allen was finally coaxed back onto the field for a pennant-contending Boston Beaneater team late in the 1897 season. Boston’s shortstop, Herman Long, was suffering with a hand injury and manager Frank Selee wanted Allen for insurance. Bob ended up taking over for 32 games at shortstop. His fielding percentage and range factor were better than Long’s and he hit a career-best .319 as well. Boston finished in first place with a 93-39 record. Despite playing just 32 games, Allen was voted a half share of the first place money for his outstanding performance down the stretch.

That season was followed by three years as a manager in both the minors and majors and a very brief five-game playing stint with Cincinnati in 1900. Allen left baseball after the season to concentrate on business and family before returning to the game in 1915 as a minor league owner. Allen was owner/president of the Knoxville Smokies of the Southern Association when he passed away in 1943.