Today we have our second guest submission from John Lease, who contributed a Card of the Day article on the 1974 Topps Rookie Shortstops, featuring Frank Taveras. For today’s card, Lease relives a tough memory from his past, which is captured on the front of the card. He goes into some detail about the 1970 NLCS series, building up to the play seen on the front of our featured card.

Today’s Card of the Day will run you about $5 for one in nice shape, though if you settle for some dinged corners, which really show up on the 1971 Topps set, you can get one a little cheaper. This card is a little more to the liking of a Reds fan, but there is a nice action shot of Manny Sanguillen on it, so there’s that. It’s a great action shot if you can ignore the fact of what happened in the photo.

Here are the front and back scans of today’s featured card: 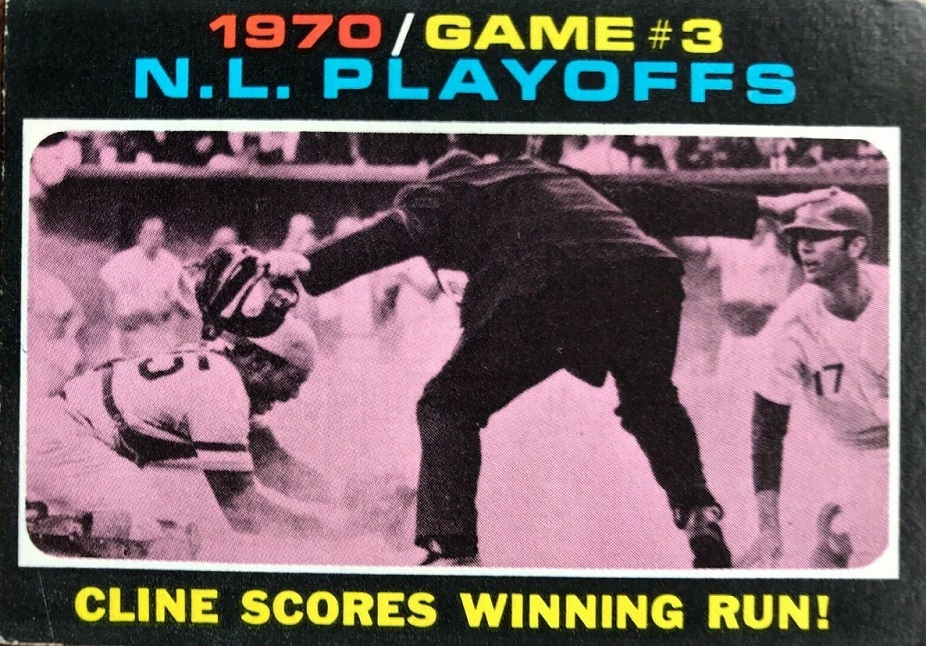 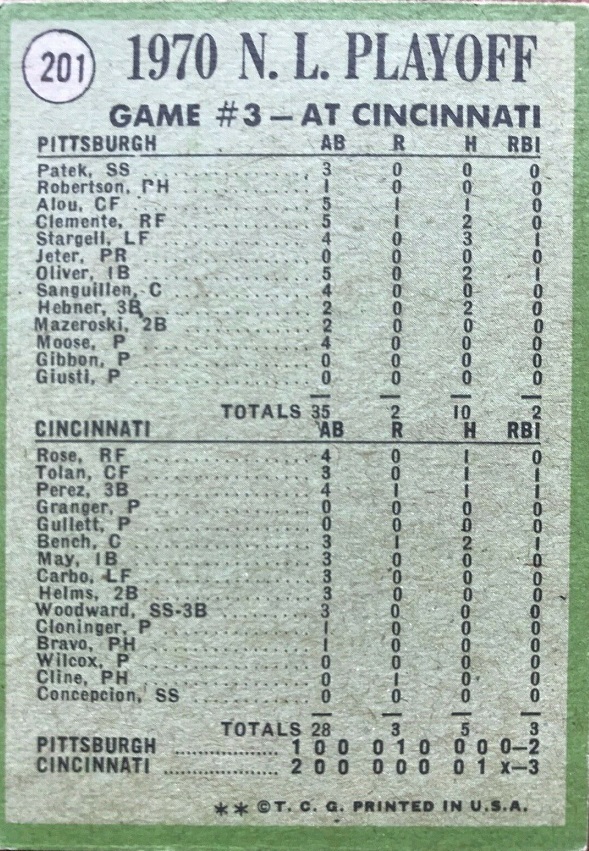 Topps issued cards for the NLCS that happened in 1970 within their 1971 set. The 1970 Pirate team isn’t remembered as much today as the 1971, or even 1972 team is, but they were a very good team that’s worth remembering. With the split into divisions in 1969, the Pirates left behind a lot of their long time rivals, and were placed with the New York Mets, Philadelphia Phillies, Chicago Cubs, St Louis Cardinals and Montreal Expos.

So of the original eight NL teams, the Pirates really only had competition from the Cardinals, since both the Phillies and Cubs had been bottom dwellers for years. It didn’t work out in 1969, as the Miracle Mets upended their entire history by winning it all, but the early 70s showed how fortuitous it was for the Pirates to be in the NL East. The Cardinals had aged out and made a series of bad trades, and the Pirates benefited. On the other hand, with the Los Angeles Dodgers, San Francisco Giants, Cincinnati Reds and Atlanta Braves all having top tier teams and talent, the NLCS turned into a nightmare for the Pirates, and 1970 was the first time we saw that play out.

The Reds had an outstanding team that year and won 102 games, while the Pirates won 89. The Reds moved to Riverfront Stadium that year, as the Pirates also moved to Three Rivers Stadium. With that big of a differential, the Pirates should have been not much of a threat. And the Reds did sweep, but the games were oh so close. Game one in Pittsburgh was an epic struggle. Doc Ellis and Gary Nolan had both pitched nine shutout innings. The tenth inning though, the Reds punched through, starting with a lead-off pinch-hit triple by Ty Cline. They wound up winning 3-0. Game two was another nip and tuck affair, with the Reds prevailing 3-1 in games started by Jim Merritt and Luke Walker. Future Pirate Bobby Tolan was the big hero for the Reds that day, homering and scoring another run on a wild pitch. Down 2-0 in the bottom of the sixth, the Pirates stormed back when Dave Cash had a one-out double. Sparky Anderson immediately went to his bullpen (controversial back then!), and Clemente singled Cash home. Manny Sanguillen singled, also bringing up Bob Robertson with two on and only one out, but Clay Carroll got him to ground out to third. Then Sparky brought in the 19-year-old lefty Don Gullett to face Stargell. Willie pulled it, but still flew out to Pete Rose. The Pirates were mowed down by Gullett the rest of the way, and that left them desperate.

Game three started out with the first Pirate lead of the NLCS. Bob Moose went for the Pirates, and Tony Cloninger went for Cincy in this home game for the Reds. The Flea (Freddie Patek) walked to lead off the first, Matty Alou grounded out to get him to second, a promising start. But Patek got nailed by Johnny Bench trying to steal third, and this promising start seemed over. Then Clemente singled. A Stargell walk was followed up by Al Oliver singling Roberto home, and a 1-0 lead was born. Manny Sanguillen grounded out, but the Pirates finally had a lead.

It didn’t last, as in the bottom of the first, with two out, Tony Perez and Johnny Bench went back-to-back, homering the Reds to a 2-1 lead. In the top of the fifth, a one-out single by Matty Alou, followed by a wild pitch and another single by Stargell, tied it up. People remember how Willie hadn’t done well in the postseason, other than 1979, but that wasn’t the case in his first crack at it. In the 1970 NLCS he hit well, going 6-for-12 (.500).

In the bottom of the sixth, the Pirates had an excellent chance to take the lead. Richie Hebner turned on Milt Wilcox and doubled to right, Bill Mazeroski followed that up with a walk, and that brought up the pitcher Bob Moose, who wasn’t an automatic out at the plate. That year he had a career high 12 hits, but he was never a good bunter. He failed to execute the bunt properly, and that left Maz on second and him at first, as Hebner was thrown out at third. Freddie Patek and Matty Alou both fanned against Wilcox, and the inning ended. Both teams did almost nothing after that, Milt Wilcox and Bob Moose mowing thru the lineups. In the bottom of the eighth, Tommy Helms and Woody Woodward both grounded out, and Ty Cline came to the plate.

Who was Ty Cline? He was a player not seen really anymore in the modern era, a defensive replacement outfielder. These became more or less extinct by the 1980s, but in the time of ten-man pitching staffs, you could afford to carry a third catcher, or maybe a defensive wiz at a position that was manned by a Luzinski or similar fielding challenged player. Ty really was a good fielder, good enough to have an 11-year career in the bigs, but he also was a decent pinch-hitter. Known for going with the pitch, and being a line drive hitter, Cline also was well traveled. After hitting just .248 in his one shot at starting in 1962, he was traded around and remained what he was, a decent pinch-hitter and excellent fielder. The Reds acquired him in June of 1970. Sparky Anderson was the brand new manager of the Reds, and a former teammate of Ty from their time in Triple-A for the Milwaukee Braves. He didn’t do well pinch-hitting in 1970, going 0-for-11 as soon as he came over, but he got some hits in his occasional starts, which was enough to keep him around. He went 4-for-9 in the three contests against the Pirates that season.

So back to the heartbreak. Ty Cline walked in the bottom of the eighth, and then Pete Rose singled to left, sending Cline to second. Joe Gibbon replaced Moose and faced the lefty Bobby Tolan. Tolan singled to left going with the pitch, and Stargell fired home. Ty was called safe in a pile at the plate, and though the Pirates rallied in the ninth with hits from Clemente and Stargell with two outs, Al Oliver ended it. This was the first of a long series of why I hate the Reds, and do to this day. I was so convinced Cline was out, and I still am. But there he is on the Card of the Day, looking at the home plate umpire Paul Pryor as Sanguillen shows him that he’s got the ball, and Pryor calling him safe.