On September 28, 1887, the Pittsburgh Alleghenys took on the Chicago White Stockings at West Side Park. The Alleghenys had James “Pud” Galvin starting that day, going up against John Clarkson. It was a matchup of two future Hall of Famers who combined to win 693 games. The 26-year-old Clarkson was still early in his career, going into the 1887 season with 100 career wins. He would finish the year with 138 wins, leading the NL for the second time in victories. Galvin was looking for career win #279 at the time, the second highest career win total at that point, trailing only Bobby Mathews.

At the time of this game, the Alleghenys were 47-65, with 11 days left on the schedule during their first season as a National League club. The White Stockings were 66-43, sitting in second place 5.5 games back, with very little time left to catch first place Detroit. The Alleghenys had basically wrapped up sixth place in the eight-team league.

While the teams both had strong pitchers, there was quite the mismatch when looking at the lineups. Pittsburgh had some players who had good seasons during their career and it was a decent overall lineup (aka not the worst). Chicago had an all-time great hitter in the cleanup spot in Cap Anson, who followed Jimmy Ryan and George Van Haltren in the batting order. Those two players have solid Hall of Fame cases, but at the time the two players batting after Anson, Fred Pfeffer and Ned Williamson, were the better players.

This game started at 1:30 PM with the home team batting first, which was common at the time. Chicago didn’t wait long to get on the board. In the second inning, Fred Pfeffer smacked a solo homer, his 15th of the season. As a side note, he would hit his 16th in the second game of the doubleheader (won by Chicago), and he would finish third in the league in homers.

Chicago scored the second run in the fourth inning on a throwing error by Doggie Miller, trying to catch Pfeffer stealing second base. That allowed Cap Anson to score. It’s interesting to note that the local paper called Anson “old man”, yet he went on to play another ten seasons, while also winning the NL batting title in 1887. He was 35 years old at the time, though obviously far from slowing down.

The game had a brief rain delay in the bottom of the sixth, then wind played havoc with anything in the air. The wet grounds and strong wind led to a wild seventh inning. Pfeffer once again got things started with a single and run scored on a passed ball. Shortstop Bill Kuehne then had trouble on consecutive grounders, which put two men on base and eventually led to Bob Pettit driving in two runs with a single. Chicago held a 5-0 lead going into the stretch.

In the bottom of the seventh, Pittsburgh finally got on the board and made this a game. Abner Dalrymple singled, then moved to second on a walk to Sam Barkley. After Pop Smith fouled out to Anson at first base, Bill Kuehne turned the tables on his shortstop counterpart, reaching on a grounder that got through Williamson. Van Haltren had trouble with a fly ball in left field and then third baseman Patsy Tebeau threw one away. Van Haltren didn’t get an error due to the windy conditions, but it was basically three misplays in a row that led to three Pittsburgh runs. Fred Carroll topped off the scoring, sending a ball down the third base line that brought in Miller with the fourth run.

In the eighth inning, Abner Dalrymple tied the score with a solo homer. It was the first home run of the season for the former Chicago star, who led the league in homers in 1885. Galvin had settled in and threw scoreless ninth and tenth innings to set up some dramatics. Dalrymple led off the bottom of the tenth inning and hit another homer off of Clarkson, giving the Alleghenys the walk-off win in game one of the doubleheader. 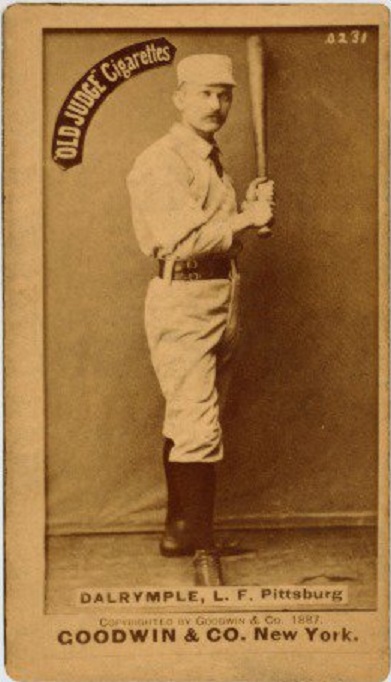 Dalrymple hit just two homers total in his two seasons with the Alleghenys and he managed to do that against one of the best pitchers of the day, in two big spots, in consecutive at-bats. In fact, he hit just one more homer in his career and that one was part of a cycle, so his final three career homers were all significant. This was just the second multi-HR game for the Alleghenys in their six seasons of Major League play.

Due to the weather, this game turned from a pitching duel into a one-inning scoring spree with a dramatic ending to the day. Galvin got his win, while Clarkson allowed 14 hits total, though only two of those runs were earned. 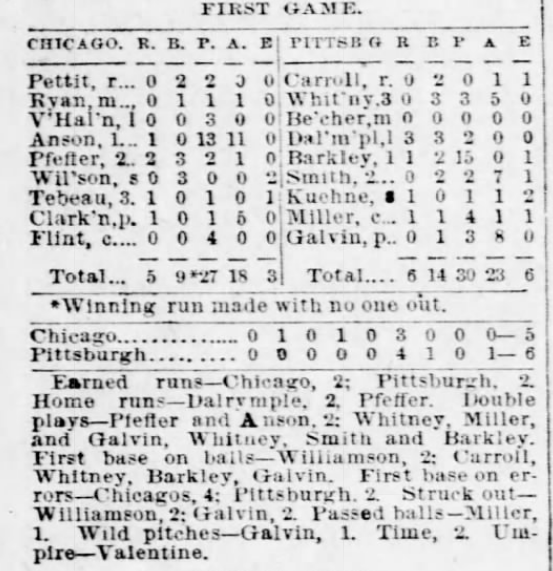